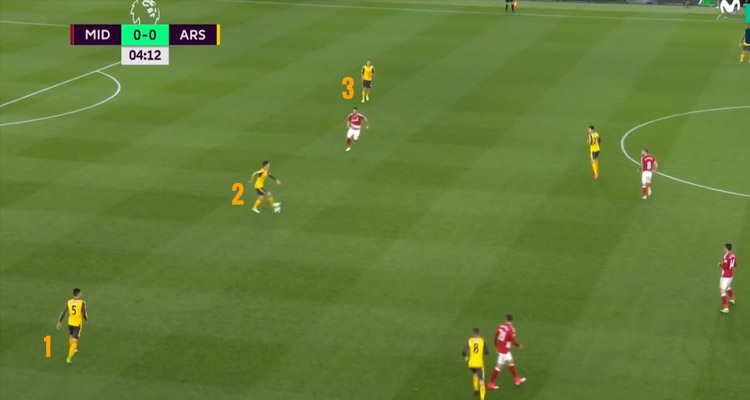 ‘Desperate times call for desperate measures’, as the saying goes. Or ‘necessity is the mother of invention’. I think there must have been an element of both those things at the Riverside last night as Arsene Wenger sent his team out with a back three for the first time since 1997.

Struggling to find a way to make his team more defensively stable away from home, we had Laurent Koscielny in the middle, flanked by Gabriel on the right and Rob Holding on the left. Nacho Monreal and Alex Oxlade-Chamberlain were sort-of wing-backs with Xhaka and Ramsey in the middle.

It really was a departure, an unexpected one too, because Wenger is so usually wedded to his formation that personnel changes are about as much as you get. This – playing an entirely new system – was a sign that he knew that alone wouldn’t be enough.

It was different, that’s for sure, but I’m not sure it was any better – although coming away with three points away from home was unquestionably an improvement on what we saw last week against Crystal Palace. It was also a performance with more commitment and effort, and in the end two moments of quality were enough for us to grab a much-needed win.

After the Arsenal players spent the first 10 minutes slipping all over the pitch, the game settled into a fairly dull affair. We had lots of the ball but didn’t do a lot with it, Boro put in crosses which we dealt with well for the most part.

When Xhaka was fouled just outside the D late in the half, Alexis took the opportunity to put us ahead. He curled a lovely shot over the wall leaving Brad Guzan rooted to the spot, and for me it was a goal that stemmed far more from the quality of the strike than the Boro keeper’s dodgy jam-packed wall.

Alexis was somewhat culpable for their early second half equaliser though, giving the ball away high up the pitch, but as they broke Monreal should know better than to allow Downing onto his left foot, and a good cross saw Negredo get away from Koscielny to stab home from close range to make it 1-1.

What gives me pause as to whether or not three at the back made us any more solid defensively is the fact they had two fantastic chances to go ahead after that goal. Firstly Downing found himself alone at the back post but blasted over, and from a set-piece Ayala headed straight at Cech when he really should have scored.

Goals have been a problem for Boro this season, you can see why, but I think better finishing there and we’d have found ourselves in trouble, and with confidence so brittle you wonder how that might have changed the trajectory of the game.

Instead, we got back in front again. Xhaka found Alexis on the left, he crossed into the area where Ramsey’s chest down into the path of Ozil was so good that the German was able to score with his right foot at the near post.

After that it was a matter of holding onto the lead, but again poor finishing from a set-piece let us off the hook in the dying minutes. There was no conviction to the close range effort from Ben Gibson and Cech saved easily, but the opportunity was there.

In the end, a win is a win, and when you’re in the kind of slump we are, they don’t come easily. Afterwards, Arsene Wenger said:

We needed to win. We were tested and maybe rode our luck on one or two occasions with crosses but we were committed and the back three worked well in the first half, we were solid. Now we have to win every game to have a chance of getting in the top four.

And on playing with a back three – something he admitted he’d been thinking about for a few weeks – he said:

The first time in 20 years, that shows you that even in my age you can change. But sometimes when a team lacks confidence, just to add something new to believe helps to focus and overall the fact that we conceded three at West Brom, three at Crystal Palace, I felt it was needed.

It worked well in the first half, we didn’t give any chances away and we were quite solid on set-pieces. In the second half on one or two occasions, I felt we could have been a bit more dominant in the air, but overall yes [it worked].

If it wasn’t quite the change many people have been advocating, it was definitely a break from the norm, and while I was a little surprised not to see Per Mertesacker as part of it, I thought once again we saw a good showing from youngster Rob Holding who has impressed almost every time he’s played this season (and for an Arsenal defender that’s saying something).

Oxlade-Chamberlain seemed to enjoy himself on the right hand side too, and we were fairly compact in midfield with Xhaka and Ramsey working well. Maybe it’ll take a few more games for the players to really get used to it, but I don’t think it did a lot to make us more effective as an attacking unit. Once again there was a lot of possession but not enough incision. Maybe that will come with more games.

The big question now is, does he stick with this system for Sunday’s FA Cup semi-final against Man City? At the very least it will have Pep Guardiola scratching his head in office thinking he knew what Wenger would do every time. Will it perhaps cause him some doubts as to what sort of team he’ll put out?

I guess we’ll see, but it would be a bit strange to make a decision as big as this one, to fundamentally change the system of the team and then bin it after just one game. No doubt we’ll hear more about that as the week goes on, and it gives us something different to talk about at least.

After the game the behaviour of the players was interesting to watch too. Alexis Sanchez was full of the laughs, booting Chamberlain up the arse before giving his shirt to a delighted kid. There were high fives and hugs, applause for the travelling fans and a message from the Ox delivered in the post-match interview on Sky.

Was it just relief, happiness at having won again knowing the pressure was off, or just a touch contrived, a very public ‘mea culpa’ after the shambles at Selhurst Park? Probably a little from column A, a little from column B, but at least it shows an awareness of what’s going and how people are feeling.

From the players, at least, the communication has been two-way, and the fact Wenger changed his formation so radically shows that he’s willing to try things we thought beyond him. Perhaps it’s too little too late in the overall context, but last night it just about worked and it’s nice to face a week without having to wonder where it all went wrong.

All going well, James – away in the land of Jamon Ruffles – and I will have an Arsecast Extra for you this morning. As ever questions/topics of discussion to us both @gunnerblog and @arseblog with the hashtag #arsecastextra.

We’ll have that for you mid-morning. Until then.