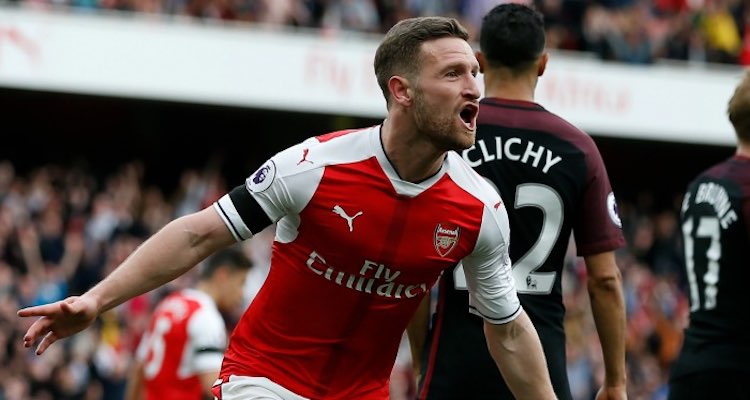 We went looking for just our second win in six league games and didn’t get it. However, we also didn’t lose our fifth game in six, so that’s something to enjoy, in as much as you can enjoy anything about this season at this point.

I thought it was a really odd game of football. I don’t quite know what was so odd about it, but that’s just the overall feeling I have about it. The crowd sounded like they were behind a team which displayed its flaws in all their glory, and we got more from the players who didn’t show up at West Brom.

Perhaps it’s just coincidence that there was no room in the squad for Aaron Ramsey or Alex Oxlade-Chamberlain, both of whom were culpable from corners at the Hawthorns, but it may also be that an injury prone duo have both picked up knocks along the way. The pre-game whispers about the Welshman, who may be facing another period on the sidelines, could well have been spot on.

It meant a midfield of Coquelin and Xhaka, while a front three of Welbeck, Alexis and Walcott looked, on paper at least, to have qualities which could cause problems for City’s defence. Both sides came close via rebounds early on, and when Caballero launched a goal kick, Mustafi pushed forward to attack the ball. He won the header but nobody filled the gap he left behind, de Bruyne’s brilliant pass found Sane and he outpaced Hector Bellerin, rounded Ospina and rolled the ball into the net to give them the lead inside five minutes.

It’s clear we have a big problem at the moment with conceding early. Look at the way we’ve been letting goals in in the first 15 minutes:

So in five of our last six games we’ve let in a goal inside the first 15 minutes, and in four of those we’ve gone on to lose. The only win came against Hull, 2-0 on February 11th. It means every game, already difficult and with increasing pressure, becomes even more of a challenge, and considering how poor we are from an attacking point of view at the moment, it’s something we need to cut out and quickly.

City could have scored more, they hit the post, Ospina had to make a good save or two, and we huffed and puffed with two central midfield players on yellow cards more or less unable to make a tackle because of that. It was a City mistake, thanks Gael Clichy, that allowed us to get level. Mustafi headed the ball back into the area, Walcott found the ball at his feet, Clichy did a Clichy, and he trickled the ball home to make it 1-1 five minutes before the break.

What you do there is consolidate. Don’t do anything stupid. Stay organised. Defend well. See the game to the break and take it from there. Which, of course, is exactly what we didn’t do. We lost the ball, we defended like twats, and Aguero found himself in all kinds of space to shoot low past Ospina to put them in front about 60 seconds after we’d scored.

What can you even say about it? You work hard to get back level and chuck it away within a minute. This team’s ability to find the self-destruct button is just remarkable. And when we were forced into a half-time change, Gabriel coming on for Koscielny, I’ll admit I feared it might get worse.

However, to our credit we got level again. It came moments after Aguero had a great chance to put City further ahead but headed wide, and when we won a corner up the other end Mustafi rose highest to nod home Ozil’s set-piece. 2-2.

This time we didn’t shoot ourselves in the foot again, but nor did we look like a team that might go on and take three points. It always felt like a game which had another goal in it, and my fear was that City would be the ones to get it.

Ospina had to save agains from Aguero, who should have done better, and dealt with an effort from outside the box from Fernandinho, but there was some discipline in midfield and at the back, Gabriel making 8 clearances in the second 45 minutes as they looked for a winner.

The introductions of Giroud and Iwobi did little to make us more threatening, and when the Nigerian blasted a shot over after some good work in midfield, it was our only effort on goal between Mustafi’s 54th minute equaliser and the final whistle. Understandably we looked like a team that was more afraid of losing than confident of winning, and if there are positives it’s that we held on to the point – insufficient as it was.

The positive aspects of our character and ‘mental strength’ – twice coming from behind – are balanced out by the negative: conceding early yet again and letting them score just after our first equaliser. But at a time like this the manager was keen to play up the former in his post-game stuff:

Overall, we started with quite a high level of anxiety. You could see that the team were touched on the confidence front and that the fluency in our game suffered.

I think we can all understand why this is a team short on confidence, but despite the draw and the fact we twice came from behind, there wasn’t much to take from the performance or the way we played. As has been the case for some time now, the football was pretty tepid, lacking any real cohesion and collective understanding of what we need to do.

That said, with another game against City coming up very soon – an FA Cup semi-final at Wembley – if we can  get ourselves going a bit over the next week with good results in two London derbies, you can see how, with a bit more fluidity and belief – they’re a team we could beat to reach the final. There’s plenty of work to do before then however, and with a game coming up on Wednesday against West Ham we’re right back in the saddle.

As it stands though, the top four looks like it’s going to be a real challenge. We remain seven points behind City with ten games left to play. Still plenty of points, but it requires us to improve radically and rapidly, while others let things slip. I can’t say I’m especially confident on either front.

Still, it’s one game at a time stuff right now, so let’s see what happens on in midweek against the Hammers.

As for the rest, fans fighting each other inside and outside of the stadium, Ivan Gazidis providing the Fans Forum with another senseless soundbite that provides no genuine clarity to what the future holds, it’s just sad to see.

As much as the manager and the team are responsible, so too are the majority shareholder and the board who are ignoring their responsibilities and driving a wedge further between the fans and the club. People already feel disconnected, and they’re adding to that with their continued cowardice in refusing to address the key issue this football club faces right now. They’re abject, pathetic and a big, big part of the problem that people should not overlook.

There’s a lot more on that in this week’s Arsecast Extra which James and I recorded last night. I’m going to get the podcast up for you early this morning, so stand by for that.

For now, have a good one.