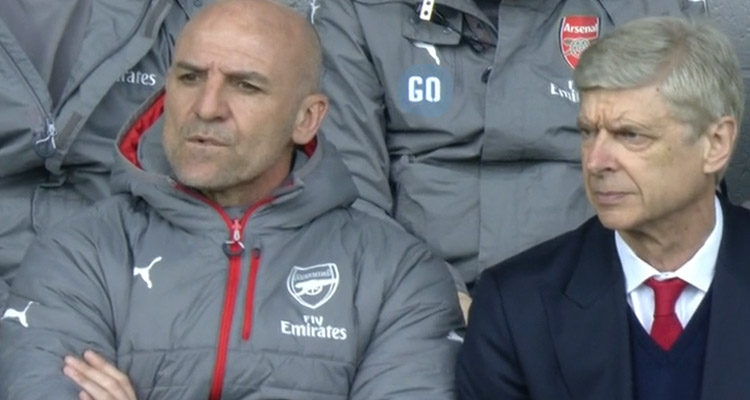 Beyond the result (dismal) and the performance (pathetic), one thing jumped out at me yesterday in the immediate aftermath of yesterday’s game. Wheeled out in front of the cameras post game, Alex Oxlade-Chamberlain spoke to Sky Sports, and said that before the game the team were very much aware of West Brom’s threat from set-pieces:

We knew that and we failed to deal with it. We knew who their danger men were and we didn’t stop them.

That was painfully obvious to those of us who watched it unfold, but what makes it interesting is that in the build-up to the game, Arsene Wenger spoke specifically about how dangerous they are from corners etc, saying:

West Brom have strong deliveries and they know as well that they have to be very efficient on that. I believe that overall we have been quite good defensively on set-pieces, but this will be a test.

So, it’s not as if the players weren’t aware. It’s not as if this came as a big surprise to them, they knew exactly what they had to deal with and they just didn’t bother. Look at both of Craig Dawson’s goals, for the first Ramsey sees him, does nothing to make life difficult for him, and others not doing their defensive duties made it simple for him to head home.

For the third goal, the one that sealed the game for West Brom, Ramsey does it again. He just lets Dawson run off him at will, Oxlade-Chamberlain’s attempt to stop him is barely even half-hearted, and the rest of the defenders just get out of the way to ensure it’s as easy as can be for him to plant his header past the hapless Ospina.

I’m wary to use the phrase ‘lost the dressing room’ but it’s apparent that whatever the messages from the training ground are, they’re not getting through. The players are not paying attention, and that was evident in the way they performed yesterday.

Now, while Wenger remains very much the centre of attention, and we’ll talk more about him later, I don’t think it’s right to ignore the men on the pitch after yesterday’s debacle. I’m aware he’s the man who bought them, they’re his players, this is his team and to a man they’re at this club because of him, giving him ultimate responsibility.

But they also have responsibility every time they pull on Arsenal shirt, and that is to do their best. It’s very hard to look at that performance yesterday and say that many of them did that. When you can’t be arsed even doing the basics then there’s a serious problem. It goes beyond them but they should not be handed a free pass for yesterday just because people are more angry with the manager. They were abject and the way they sheepishly greeted fans afterwards shows that they knew it, but the problems go deeper than that as I’ll touch on in a bit.

Having equalised through Alexis Sanchez just minutes after they scored you hoped that might spark us into life, but what we got was lots of Arsenal possession with no end product. We play safe, sterile football, passing the ball in large arcs from one side of the pitch to the other with almost no incision or ambition when we have the ball.

Confidence is low, and there’s a tendency to play it safe at times like this, but this has been a problem for much longer than the last few games. It’s dull, lifeless and stale. From just 5 attempts on goal in the second half, none hit the target. There was no service for the strikers and when, at 3-1, Wenger brought Alexis off that was as close to an Arsenal manager throwing in the towel as you will ever see.

Of course the fact that the Chilean’s ankle was in a ‘terrible state‘ after a horrible challenge from James McClean played a part. On that briefly, the West Brom man was lucky to escape with just a yellow in my opinion, and you can insert your own ‘If that was Xhaka’ comment here. But for the second successive game we had the commentary team glossing over a challenge which could (and actually might have) caused serious injury to an Arsenal player.

Think back to Bellerin being rendered unconscious by Alonso and the Sky ‘narrative’ about how the Chelsea man was brave. It was the same last week when a Lincoln player launched himself off the ground at Ozil’s legs, and yesterday we got ‘That was certainly a meaty tackle’ when replays showed McClean going studs up on Sanchez’s ankle with the ball long gone. Broadcasters should have a duty to call things what they are, not lionise or pay lip-service to serious foul play because it only encourages it and ultimately serious injury.

I’m not sure the result or performance would have been much different with a fully fit Alexis out there, and I’m not making excuses for that. I’m just fed up of our players being subjected to these kind of challenges and for them to be basically laughed off. Especially as we get severely punished and roundly criticised for far less – insert another Xhaka comment here.

Still, that’s a sidebar to the main event, and it’s now four defeats in five games in the Premier League, the first time that’s ever happened under Arsene Wenger. And the way we’re playing right now, it’s hard to see how we’re going to make things better. It’s not as if we didn’t have plenty of time to prepare and work hard, there was a full week between the Lincoln game and yesterday.

You think back to all the time we had to prepare for the trip to Anfield, and how bad we were that day too. Whatever is happening, whatever is being said and done, it’s not making any difference. Players can say all kinds of things in public, about how they’re hurting, how they’ve let the manager down and all the rest.

I’m sure they are hurting and they certainly have let him – and themselves – down, but the real truth comes from what happens on the pitch and it’s a very sad one based on that performance yesterday. As I said on Twitter after the game this team looks completely broken, and I don’t think Arsene Wenger can fix it.

We can only speculate, but performances like the one we saw yesterday suggest that the players also think he can’t fix it and all the training, all the focus and preparation, is like pissing in the wind because it doesn’t make any difference. The bottom line is that these Arsenal players probably trained all week knowing they had to work hard to deny West Brom at set-pieces and on the day they just didn’t do it. They ignored those instructions and that suggests that things are as bad as they have ever been under this manager.

When players perform the way they did at West Brom, with a lack of discipline and an unwillingness to carry out basic instructions, it speaks to something being badly wrong. If we were to look at this happening to another team, I think the consensus would be that the manager is basically a dead man walking. That’s what this Arsenal situation looks like to me, at least, and it’s going to take something pretty special not to make the remainder of this season very grim indeed.

After the game, the manager hinted that he had made a decision on his future, saying:

I know what I will do in my future. You will soon know. Very soon you will see.

Then, when asked if anybody else was aware of his intentions, he said:

I mean, that’s kind of ludicrous. Whatever his decision it’s a crucial one for this football club, and that he’s the only man who knows is just wrong. Now, maybe it’s a case that what he saw yesterday tipped the balance for him, and in the wake of that performance he made his mind up there and then as he entered the press room at The Hawthorns. I suspect, however, that Arsene Wenger would give more consideration to his decision than that.

As for what it means, your guess is as good as mine. I was curious to see whether people felt he was saying he was going or staying, and the results of this poll show what the thinking is:

POLL: Curious. Re AW'S comments here – https://t.co/JdVxFAbt6M – do you think he's going to:

35% think he’s going to stay, 65% think he’s going to go. From what he said and how he said it, I’d be leaning towards him going, but you just never know with this football club. I really don’t see how there’s any case to be made for him being offered a new contract, but of course Stan Kroenke, Ivan Gazidis and Arsene Wenger himself might view that very differently.

In the end though, it’s impossible to look past that performance. With a week to prepare, to get back on track, to show some character and that they’re still willing to put it in for the club and the manager, that’s what we got.

And those actions speak louder than any words.