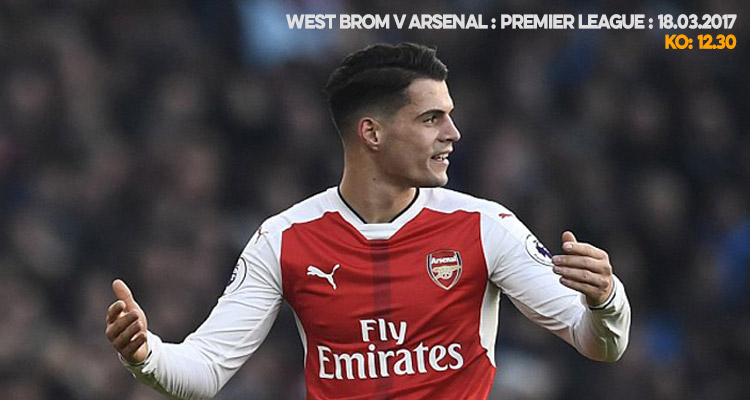 Morning, it’s West Brom at the Hawthorns this morning, and it’s all set up to be a difficult day. Early kick off? Check. Away from home? Check. Big, physical side? Check. Beat us there last season? Check. We’re still some way from being convincing in terms of form? Check.

So, this team are going to have to dig deep today to get the win we need to go into the Interlull. The last thing we need is two weeks to allow another poor result or performance to fester.

At this point I’ve stopped worrying/caring too much about team selection. The manager is still trying to make certain pieces come together, and until we can find something that works relatively well in midfield everything else is going to be a struggle.

Xhaka and Ramsey look like they fit, but maybe they’re better with the addition of another body in there. A midfield three rather than two plus Mesut Ozil given room to drift and float around the pitch. Arsene Wenger had some interesting comments about the Swiss international in the build-up to this game, suggesting he has something to learn in terms of his tackling:

When he stays on his feet he is a fair player. But he does have a problem with his technique [tackling]. He hasn’t mastered the art of tackling yet.

And he says he has garnered an unfair reputation because of that:

I believe that he is now in a position where on the first foul, he gets a yellow card. For example, last Saturday [against Lincoln] – first foul, soft yellow card. So, he is a victim a little bit of his reputation. You see tackles of some players which are much worse than what he did [against Burnley] and they don’t even get a yellow card. He got a straight red and because he had a history of that in Germany, I think he is a bit of a victim of that.

Which I don’t think is unreasonable, but I do wonder if talking about it so publicly is wise (and I realise he was asked about it and was simply answering the question). My suspicion is that won’t make referees take more time consider whether or not a Xhaka challenge is a foul worthy of a yellow, but automatically assume it is one because it’s him. Anyway, I think we all know the solution to this problem: Xhaka simply needs to change his name to Marcos Rojo because that gives you licence to steam in two-footed and stamp on players heads without being properly punished.

Still in a game that’s going to be physical, he will have to be careful, because you can be sure that players also know his reputation and will take the chance to roll around and make it look as if they’ve been banjaxed at the slightest chance. As silly as his foul against Burnley was, he wasn’t helped by his opponent pulling a fast one, so the onus is on him to be clean … if he can.

Elsewhere, you wonder if he might start Olivier Giroud up front. Not simply because he views him as the best man to lead the line, but against a team who are a real threat from set-pieces etc, having that extra height in our own penalty area might very well be useful. We’re not the biggest team, so that might well be a consideration.

If that’s the way he goes, I can’t see anything other than Alexis and Walcott either side of him, leaving the likes of Welbeck, Iwobi, and Perez on the bench should we need them. At which point we come back to that third body in midfield. Will it be Ozil? Is this the kind of game to reintroduce him to the starting line-up? Or will Oxlade-Chamberlain have recovered enough to keep his place?

Decisions, decisions. What is clear though is how important three points are today. There’s a 5 point gap between us and the top four, and even if we have two games in hand, you can’t allow that to widen. As the remaining games dwindle, that gap will become a psychological chasm, a footballing Springfield Gorge that we’ll have to try and skateboard across.

We really didn’t learn anything  from Lincoln that we didn’t already know, but with just one win in our last four Premier League games, it’s very much time to get back to winning ways. Fingers crossed.

We will have a live blog for you later on, so you can follow the game there and chat with other Arsenal fans while you do. Check back for a post with all the info or bookmark our default live blog page and updates will begin automatically, about an hour before kick-off with team news.

We’ll also have a match report, stats, player ratings and all the rest over on Arseblog News afterwards. For now, I’ll leave you with yesterday’s Arsecast if you haven’t had a chance to listen yet. I chat with Paolo Bandini about one of the most widely tipped Arsene Wenger replacements, the Champions League and lots more. Listen below, catch you later for the game.