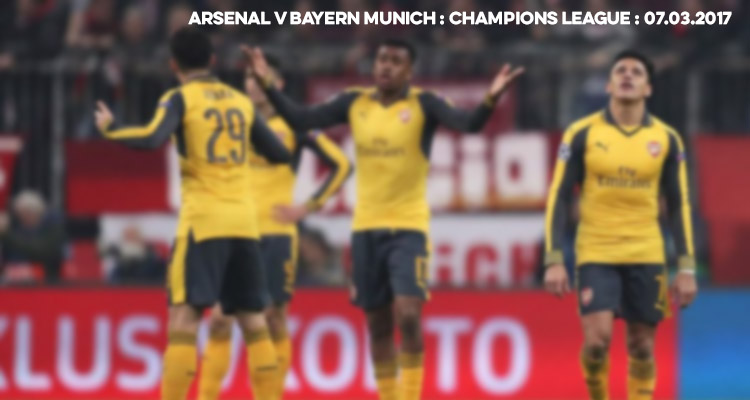 You know the old saying ‘What is it you need after a disheartening away defeat to a top four rival? That’s right, a home game against one of the best team’s in Europe that beat you 5-1 just a couple of weeks ago!’

I hate old sayings sometimes, but that’s what we’ve got. Bayern Munich are in town and considering our form and what they did to us last time out, it’s hard not to be a bit worried about what might happen later on this evening.

What kind of Arsenal are we going to see? Your guess is as good as mine. What kind of team selection? I don’t really know. How much can he change things around from the team which played Liverpool? Coquelin for Ramsey? Gibbs for Monreal in one of the most underwhelming rotations we’ve got at the moment?

David Ospina for Petr Cech is hardly going to get us going. Up front the manager said he had yet to decide whether Alexis would start, but revealed Mesut Ozil would be missing the game because he’s not ready yet following his bout of illness.

I’d like to see Lucas Perez start a game. Maybe it’s verging on pointless at this stage, but with Alex Iwobi struggling for form, it seems a good idea to take him out of the firing line a bit, and while the Spaniard doesn’t really fulfil the role that Iwobi does, he could easily start up top with Alexis in behind him.

Anyway, I just don’t know, and I’m unsure of how the manager is going to get this team going again. It feels like it needs a massive kick up the arse, but then it’s felt like that for a little while yet, and if the arse-kicking has been delivered it hasn’t made much difference.

I suppose the best we can really hope for this evening is something that restores some pride. The chances of going through are so slim as to not even be worth mentioning, it would take something incredible and remarkable (early Neuer red please!), but at least a decent result and a performance which shows some balls would be a positive.

It’s something that club captain Per Mertesacker touched on when asked about the game and the current issues at the club. He said:

I think we saw on a lot of occasions that we were absolutely not ready for a fight, and that’s what I want to see tomorrow: that we are up for a fight, to challenge something. It’s really down to us now to make the first step to make our fans proud of ourselves again. That is really something that we need the emphasis on.

If you watched the press conference you’ll have noted that Per’s knee injury has had some interesting side effects, causing his accent to become about 75% more London. Still, there’s no arguing with that sentiment, and maybe his presence on the pitch might help in that regard.

Whatever happens, we have to see more from these players than we have in recent weeks. Four defeats from the last six games have been so damaging, and while I’m not sure that the manager’s instructions to ‘go for it’ against a team as good as Bayern are really the best way to approach a game against that kind of opposition, we are where we are with this side and how it plays the game.

It’s got to work sooner or later, right?

So, we’ll see what happens from 7.45 this evening, but anything other than a seventh successive Round of 16 exit would be a massive shock.

Aside from the game, Arsene Wenger addressed the issue of the Alexis Sanchez training ground bust-up insisting that nothing had happened and it was all down to the newspapers. Which, in fairness, is exactly what he should say, although he did admit the Chilean’s behaviour can be ‘excessive’ at times. By that he meant the gesturing/posturing on the pitch.

It’s a kind of damage limitation, no less than you would expect from any manager really, and it is completely understandable, but it doesn’t mean that it didn’t happen. It most certainly did, and I suspect that his total denial of it is in some ways designed to try and kill the story off, because if the meat and drink of what went down was made fully public I think it would be particularly damaging.

He also touched on the future of Sanchez, heading towards the final 12 months of his contract, and made it clear that Arsenal would be the ones who decided what happened:

Alexis has 15 months of his contract, so the decision of will he be here or not will depend completely on Arsenal Football Club and not on anybody else.

Which in some ways sounds like we’d be willing to make him play out the final 12 months of his deal even if he didn’t sign a new contract, but I think we all understand the reality. A club like Arsenal, even with increased financial firepower, won’t let an asset of that value walk away for free – especially when they’re going to have to replace him.

My gut feeling is that is he will go in the summer, we’ll sell him somewhere for less than he’s worth because of the relatively short amount of time left on his contract, and quite who we bring in to fill that gap is anybody’s guess. That’s if we bring in anyone at all and don’t use an ‘internal solution’ like Welbeck.

Alexis being at Arsenal next season is about as likely as a 5-0 win tonight. And I think we all know the odds on that one (300-1, just in case you were wondering). Crafty fiver on that? Or I could just set the fiver on fire.

Right, that’s about that. If you didn’t get a chance to listen yesterday, James and I produced a fairly epic Arsecast Extra talking about the Alexis, Liverpool, Wenger stuff, as well as discussing the board and their role in the current situation at the club. It’ll get you through a good chunk of your day, so listen below.

We’ll have all the live blog stuff for you later on as usual. Come join us.

We all float down here.