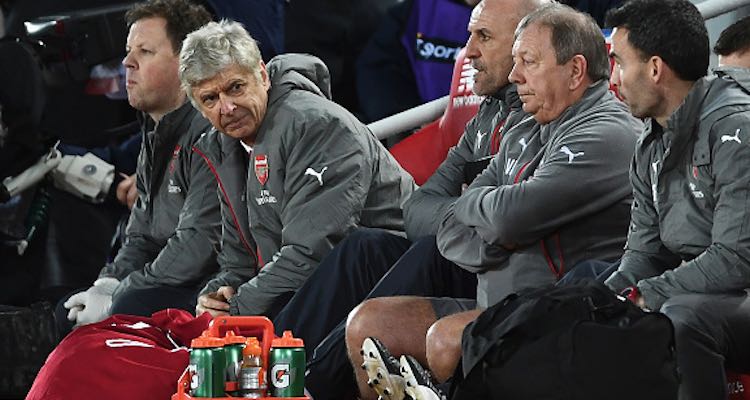 There is only one place to start this morning and that is Arsene Wenger’s decision to start yesterday’s game without Alexis Sanchez.

The Premier League’s joint top scorer was not injured so it wasn’t protective. The suggestion that he went with Olivier Giroud and Danny Welbeck because he wanted to be a bit more direct really doesn’t make much sense to me, so we can rule it out as purely tactical.

You simply don’t go into a game of this magnitude without your top scorer and the man who has created the most assists for tactical reasons. So, what are you left with? A manager, perhaps, making a statement to the player and to the rest of the squad? Has something happened on the training ground? Is it a cumulation of things over the last little while?

Whatever his reasons for it, it was a massive gamble, and ultimately one that backfired. When Sanchez was put on at half-time with Arsenal 2-0 down, it was a tacit admission that the statement he was trying to make was one he was willing to back down from, and that the original decision was wrong.

Liverpool’s confidence was low, having just been beaten by Leicester and with just two wins from their last twelve games. I know I’ve spoken about our ability to infuse the opposition with belief, but imagine the boost they got when they saw Alexis on the bench? A defence which has conceded more goals than any other in the top 7 must have breathed a sigh of relief and then settled into the game quite comfortably knowing they didn’t have to deal with one of the most dangerous forwards in the Premier League.

It was the managerial equivalent of putting the ball over the bar from 2 yards out. A Ronnie Rosenthal moment, and entirely the wrong game to try and stamp some authority over your squad. It was at the very least a must not lose fixture, and this decision went some way to ensuring that we left Anfield defeated.

Our defensive instability was obvious and although it looked like we were trying to sit deep and hit them on the counter, I think it was more to do with Liverpool playing well and at a high tempo, and when you don’t have a functional central midfield then you’re always going to struggle.

This has been a problem for a long time now. We don’t have a pairing in there that works, and yesterday Coquelin and Xhaka illustrated that they’re an ill-fitting partnership again (as is Coquelin with anyone but Cazorla). I know Wenger didn’t have much choice, with Ramsey only back from injury, and with Elneny and Cazorla absent, but watching Coquelin slash at the ball just before half-time like a pub player is illustrative of how much he’s struggling to keep up right now. That ended up with Coutinho almost making it 3-0 before the break.

Alex Iwobi in the Ozil role is a fantastic young player, but it feels like he’s a guy at a period in his career when he might need to be taken out of the firing line a little bit. People are beginning to turn on a young lad who has barely 12 months of first team football under his belt, which seems horribly unfair to me, but at the same time his form has been such that you can understand frustration. Iwobi is not picking himself though, so some understanding of his situation would be merited.

So with no midfield to speak of, Liverpool found us a soft touch. The first goal was basically route-one. A kick out from Mignolet, Koscielny missed the initial header, the midfield was nowhere and when Mane’s cross/shot found Firmino at the back post he took a touch and slammed the ball home.

The second was a nicely worked goal from Liverpool but again defensive deficiencies let us down. Iwobi failed to track the run of Wijnaldum, quick passing found Mane alone inside the box and despite desperate efforts to get across from Monreal, he had time and space to lash the ball beyond Cech to make it 2-0.

The introduction of Sanchez gave us a boost and the second half was certainly better, but when a team is 2-0 up that often tends to be the way the game goes. Still, the Chilean fed Danny Welbeck whose finish to make it 2-1 was really lovely, and at that point you have well over half an hour to get yourself another goal, at least.

After we scored, we didn’t have a single shot on target. Not one.

Walcott and Lucas came on for Giroud and Welbeck, but it made no difference. Late on the Spaniard had a shot blocked in their box and from there Liverpool hit us on the break to score the goal that sealed the game. It was a bog-standard counter-attack which we failed to deal with in any meaningful way, and it was just so easy for them.

In the end we came away with what the performance merited, which was nothing. Liverpool were quicker, faster, stronger, first to the ball more often than not, and we looked like a side that really does not know its arse from its elbow.

Afterwards, Arsene Wenger spoke about his decision to leave Alexis on the bench:

Everybody will come to the same conclusion, but I’m strong enough and lucid enough to analyse the impact. And I don’t deny that Alexis is a great player. I bought him and I always played him. This decision was not easy to make, but I have to stand up for it.

He obviously made a decision he felt was right in more general terms. Being the manager of a football club isn’t just about picking the 11 to play on a Saturday etc, and there times when you feel you have to make decisions that can backfire, but this is one that has well and truly done that.

I don’t even know if Alexis playing from the start would have made that much difference yesterday. He’s a great player but there’s so much more wrong with the team at the moment than his absence. What I think is more telling is when he was asked if he had any regrets about the game, and he replied:

I just think that I have no special regrets. My regret is to have lost the game and especially in the first half, for the first goal we conceded from a direct kick from their goalkeeper. The fact that we lacked pace in our first half was down to, in my opinion, the fact that we had a lack of competition.

To me this is much more of an issue than leaving Sanchez out. He’s saying that the fact we’ve had basically two weeks off to prepare for this game is why we started slowly. I can’t buy that at all. We’ve had all that time off, to keep players fresh and fit, and this is somehow a bad thing?

If you can’t use that time to prepare your team properly for a game which you know is so, so important, then there’s something really wrong. And it does feel like that at the moment. I’ve spoken before about how it feels his message is not getting through, whatever he’s demanding of his team they’re just not delivering on the pitch, and when you get to that point there’s usually only one way things go.

There was a moment during the coverage last night when the camera switched from an ebullient Jurgen Klopp to a distraught looking Arsene Wenger, sweeping his hand through his hair as he watched his players get the run-around from Liverpool.

I might be alone here, but I felt sorry for him. I know some won’t, some will be furious, others resigned, but I’m not telling anyone else how to feel. I just saw a man who realises that things aren’t working the way he wants, feeling the pressure and the reality of his situation.

People point to the fact that Klopp was on his feet and Wenger sat down as an issue, but for me that’s not important. In reality there’s very little a manager can do to influence a game by shouting and jumping around in his technical area. What happens on the training ground, how he prepares his players, how he selects his team, how he ensures that key areas of the pitch are functional, are things that are far more important.

Wenger could have stood up, yelled, bleated, gestured, and done hand-stands up and down the touchline last night and it wouldn’t have made the slightest bit of difference. What’s wrong with this team goes so far beyond the fact he’s sitting down it seems ludicrous to have to even point it out.

So, another dismal performance against the big teams away from home calcifies my thinking about what has to happen this summer. Arsenal need a new manager. Last night felt like something of a last-chance saloon for this season, to show there’s some structure and fight to the team. A game which could be taken and used as evidence that there’s still something left.

Instead we left with nothing.

Liverpool 3-1 Arsenal: The champions dominate, but Gunners can have some regrets