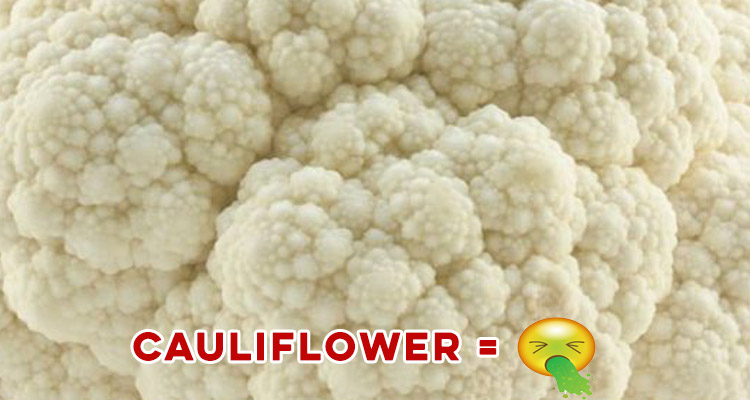 I don’t like cauliflower. It’s something to do with the texture of it. I’m not vegetable averse, by any means. I even like broccoli, which is kind of green cauliflower, I guess, but cauliflower itself is gross to me. They remind me of earth brains. Earth brains that possibly have worms in them. Or on them.

I can’t help it. I just think the very worst of cauliflower.

No matter what anyone said to me about it, I still wouldn’t like it. You cannot convince me to ‘just try it’ or that it is good. I have tried it, and it made me want to do some sick. In fact, just talking about cauliflower has completely made me forget the point I was going to make about it.

It was going to be a long thing that meandered to the point eventually, but now I can’t remember what it is. It was something about personal choice, and a lack of respect of those choices, but in a football context. It was much more in-depth than that though, requiring me to jump through a number of hoops before the denouement which would have, I’m sure, come across as quite amazing and made people think ‘Hey, that’s a new and interesting way to look at things!’

Now all we’ve got is that I don’t like cauliflower. When you don’t have the rest, it’s not much of a starting point. Maybe it was Arsenal’s performances in the big games away from home that I was going to liken to a casserole made of lumpy, bumpy, weirdly-stemmed earth brains. That sounds like it could have been a thing.

Or maybe it was to do with people who would tell me that I was completely wrong about cauliflower and that it was delicious. In which case I would have to fundamentally disagree with that person’s opinion. Aha!

And I might reply, “Yeah, but that’s just like your opinion man. I’m not saying that you can’t have it, or that you should be imprisoned for it – even if cauliflower lovers would be high on my list of ‘suspicious people’ if I ever took over as World Leader of the Universe – but simply that while I believe you have the right to this opinion, I’m not obliged to respect it or agree with it.”

I certainly wouldn’t spend my time trying to convince this person that they shouldn’t like cauliflower; and I would hope they wouldn’t do likewise, because it would be absolutely pointless. As they munched their way through a cauliflower sandwich, spronkling bits of it through the air towards me as they extolled the virtues of this most foul brassica, my mind would not be changed.

I might go so far as to pen a lengthy diatribe on my Cauliblog website, set up to dismiss cauliflower at every opportunity. They would then be able to respond via their own platform, Caulipod, a weekly podcast which brings on guests from all over the world who love cauliflower. People like Phil Collins, a dolphin, John Terry, Marcos Alonso’s flying elbows and such like.

Because there’s nobody saying fans of cauliflower can’t have an opinion on cauliflower. It’s not as if we live in a world where it’s now a case that anyone can have an opinion, because they’ve always had them. It’s just that now there are more and more platforms, of various profiles, in which you can make those opinions known.

Some people will quite reasonably say ‘Look, I like cauliflower but I understand that some people don’t. That’s life.’

Others will shout loudly, “CAULIFLOWER IS THE BEST AND ANYONE THAT THINKS IT’S NOT IS A DICKHEAD,’ and that doesn’t really sit well with those of us who think it’s disgusting. Why should we be called names because we don’t like it? It’s their opinion, and they have every right to have it, but equally we have a right to disagree with that opinion and not necessarily respect the opinion itself.

That can then spark debate, discussion, exchanges of views, and discourse. It really ought to be polite discourse, but too often I think we get a starting point of ‘absolutely furious’ and where the hell do you go from there?

Maybe they don’t agree with vehemence with which they defend their favourite veggie, but it doesn’t stop them liking it in itself. Some people want to be cauliflower stars, and if that’s the road they wish to travel, fair enough but they ought to remember that if they trumpet the right to shout loudly about how much they love it, they’re likely to meet some people along the way who will shout just as loudly about how they don’t.

So, in conclusion: cauliflower is minging. But let’s agree there’s room for those who like it, those who don’t, and those who like it but not as much as those who really, really like it. And maybe some other variables too that I have forgotten.

In other brief news, Hector Bellerin may miss this weekend’s game against Hull because of the concussion guidelines set out by the Premier League. Some interesting reading on those here.

As I said after the game, the only credit Arsenal came away with from Stamford Bridge last Saturday was how quickly they reacted to Bellerin’s injury. They didn’t allow him to stay on, or stagger around for a bit, like many other players have after a serious blow to the head. That the club doctor, Gary O’Driscoll, was heavily involved in the drafting the new guidelines, was probably key to that.

With regard to head injuries there has been a perception in the past that you can tough it out, you can play on, you can be brave. You need to make sure that everybody is aware of concussion, that everybody understands that it is just as significant as any other injury and that appropriate management is critical.

We’d really like for everybody involved in the game to accept that concussion is a brain injury. We are acting in your best interests, and the team’s best interests. To take a player off is for his short-term, medium-term and long-term benefit.

Let’s hope it’s routine stuff for Hector, but the club’s stance on taking immediate action on the day is to be applauded. As for those, including Marcos Alonso, who still insist it wasn’t a foul, I can only imagine they love cauliflower.