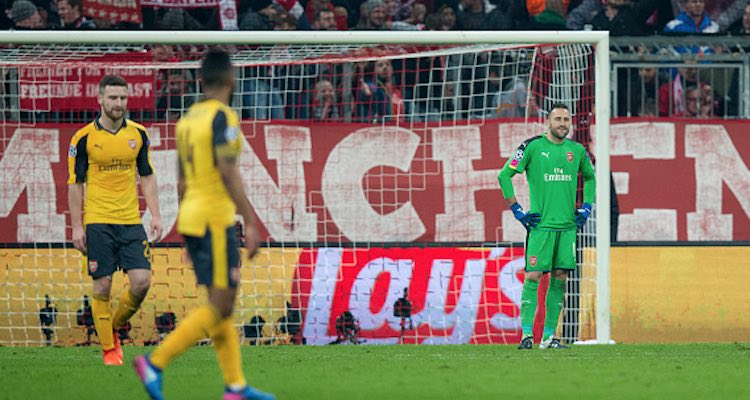 Even if we had a chance to go ahead late in the first half, it would be fair to say that 1-1 at half-time was a place most people were happy to be. Even the penalty we scored was vaguely ridiculous. A dreadful initial attempt by Alexis, an air shot, and then a sublime piece of skill and finish to equalise.

However, until then we’d been basically played off the park by a team that looked as good as any of the European giants we’ve faced down the years. Only this time you knew there was something more to it, in that we were making them look good to some extent by how bad we were.

The opening goal was ludicrous. A superb finish by Arjen Robben, no doubt about it, but a woeful piece of midfield play from Francis Coquelin who has to know you simply don’t allow him to come inside on his left foot. Instead, he went the other way, Robben said ‘Thanks very much, you eejit’, and curled a fine shot in off the underside of the crossbar.

The ball, the little we did have of it, was like a hot potato to most of our players who just got rid of it as quickly as they could. In terms of possession, territory, chances, passes, and almost every other metric you can think of – other than ‘being a bit shit’ – Bayern were on top.

And yet, at half-time it was 1-1. It might have been better had Xhaka not shot straight at the keeper, and a confident Mesut Ozil, one who looks like he’s not carrying the weight of the world on his shoulders, probably would have scored that chance he had late in the half. It wasn’t quite hope, but it certainly wasn’t anything close to the despair of that second 45 minutes.

I’ll admit my heart sank when Laurent Koscielny went off. Playing a Bayern Munich in this mood with Mustafi and Gabriel at centre-half is a bit like asked to fight a pack of lions with only a lollipop stick as a weapon, but we still shouldn’t have been ripped apart the way we were.

WHAM – Mustafi beaten in the air by Lewandowski who finally did what he threatened to do all night and scored one of the chances given to him in the area.

BAM – Mustafi is in mid-conversation with Bellerin and doesn’t see Thiago stroll beyond him to make it 3-1.

THANK YOU MA’AM – A poor clearance from a corner comes to Thiago whose shot deflects off Xhaka to wrong foot Ospina.

Send on the cavalry, Arsenal. But when your cavalry is Theo Walcott, far more a young man running around on one of those wooden sticks with a horse’s head at the top than a mighty angry stallion ready to breathe life into your side, you know you’re pretty much doomed.

But for David Ospina it would have been far, far worse. The Colombian made a string of saves to keep the score down. I won’t say respectable, just down. But when they sent on Muller for Lewandowski and Oxlade-Chamberlain made a mess of things at the back, the man who had scored just one goal in his last 16 games was there to stick it home. What a nice lot we are, doing our best to rejuvenate the fortunes of others time and time again. The Arsenal Make A Wish Foundation does it again.

It was, frankly, pitiful. And perhaps what was most pitiful of all was that it wasn’t even that surprising. The players barely looked like they were going through the motions. To say they gave up is a serious accusation, and I wouldn’t necessarily go that far, but they knew they were done for and they simply had no response. Been there too many times? Aware that nothing Arsene Wenger could do from the bench would make any difference? Weighed down by this same scenario playing out yet again?

All of those things, I’m sure, and more. And while the focus will certainly be on the manager this morning, it doesn’t absolve the men wearing the shirts who let themselves, their manager, and the team down last night. The thing is though, you don’t change the entire playing squad. In some ways we’ve done that down the years, and that leaves us only in one place.

I watched the manager’s post-match interview on BT Sport. He looked hollow, barely able to make eye-contact with the man interviewing him, and I think he knows that his message is no longer getting through to the players the way it should.

He spoke of the last 25 minutes as a ‘nightmare’ and said that the team were ‘mentally very jaded’, but I don’t even know what that means. Knowing the importance of the Champions League and what a good run/performance might do, why are these players ‘mentally jaded’, and not more ‘up for it’? There’s no shame in losing to Bayern Munich away from home, but there is when you get absolutely hammered like that. It’s embarrassing.

A couple of weeks ago on the Arsecast Extra, James made the point about how often Arsene speaks about the team’s mentality. It’s mental strength when we win, we’re mentally not focused or not ready or jaded when we don’t. It feels like it’s self-fulfilling in a way. There’s an easy intangible to blame when things go wrong. It wasn’t the system, it wasn’t the tactics, it wasn’t lack of concentration or application, it wasn’t the players themselves, but their silly old brains.

And maybe that’s the way he’s always operated, but it’s quite clear now that it’s not working. There comes a point where players lose faith – and this is not to excuse them in any way because they too are culpable – but it’s human nature that when you hear the same thing all the time it stops resonating in any serious way. Arsene Wenger is now the football management equivalent of saying a word over and over and over again until it sounds silly and loses all meaning.

So, what now? I don’t think anything should, or will, happen before the end of the season. My gut feeling, not simply based on last night or Arsene’s reaction to it, is that he will call time on things this summer – and I think that’s the right move for all concerned. Whether this expedites *that* conversation with the board I don’t know, but leaving that aside, if Arsenal Football Club are not preparing in any way for that eventuality then we’re in bigger trouble than people think.

As I’ve written about countless times before, there’s a lot more to the changing of the guard at Arsenal than one man in, one man out. You don’t replace Arsene Wenger with another Arsene Wenger. The structures at the club at this moment in time are a long way from what’s required to bring in a modern day head-coach. The almost total dearth of football and Arsenal knowledge on the board that has to be addressed, because if it’s not the decision making will be a long way from as informed as it should be for something like this to happen.

Make no mistake, it’s seismic. It might get worse before it gets better, but you’d be hard pressed to make the point that it’s going to get better under the manager as it stands. But we’re in this weird kind of limbo right now where the board would like nothing more than for him to sign a two year deal, and until the man himself makes the decision nothing is going to happen.

It’s a sad time, and while I think change is necessary and inevitable, I cannot plumb the depths and abuse him the way others do. That’s their choice, I’ll make mine. By all means criticise, Arsene Wenger is long enough in the game to understand that’s part and parcel of the job, but he doesn’t deserve the vitriol and viciousness aimed at him from some quarters.

To me he’s a man who lives for football and for Arsenal, if you don’t think he suffers when we lose, or doesn’t work as hard as possible to win games and win things, then you don’t know him at all. The issue is that the hard work is no longer producing the performances and results to meet the standards that he himself went a long way to setting at this club. Last night’s second half capitulation was further evidence of that, and there’s little left now other than to let the contract run out in June and start making plans for what comes next.

I hope it doesn’t descend into further acrimony. Suggestions that he announce it soon and thus get people behind him for the final few months do make some sense but don’t seem very Arsene Wenger or very Arsenal for that matter. But given the sheer scale of the changes required if and when he does go, the sooner there’s some clarity the better.

Whatever happens, it looks like it’s going to be a tumultuous, emotional and interesting few months in the life of Arsenal Football Club.