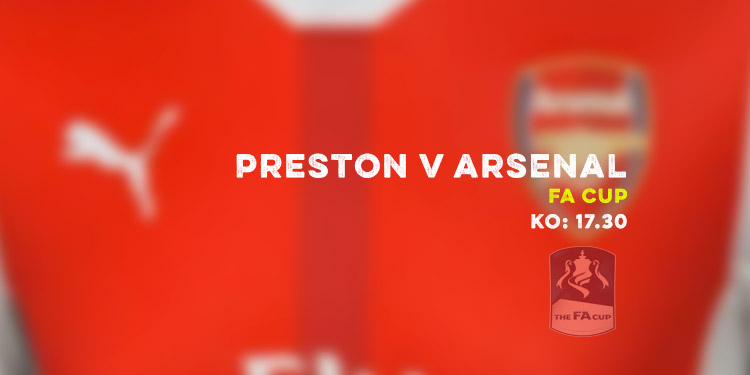 It’s FA Cup 3rd round action later on today as we face Preston at Deepdale.

It’s been a long time since we faced the first Invincibles, we last went there in a League Cup game in October 1999 when goals from Stefan Malz and Marc Overmars gave us a 2-1 win.

If you’ve been supporting Arsenal long enough you’ll know that the 3rd round of the cup can spring some nasty surprises. It’s been a while, in fairness, but anyone expecting this to be a stroll in the park today should think again.

We’re going to be without Petr Cech, Laurent Koscielny, Mesut Ozil, and Alexis Sanchez, as well as those like Coquelin, Walcott, Cazorla etc sidelined through injury or international commitments. It means that even if the manager does pick a strong side today, it’ll be a long way from what would normally be considered our first eleven.

At the back it could be Rob Holding and Gabriel, although he may want to give Mustafi a game to find his fitness again because he struggled in a big way against Bournemouth and may feel he could use the minutes. That would leave one of the other two at right back if he wants to rest Hector Bellerin – assuming he doesn’t give Carl Jenkinson a chance.

Olivier Giroud should continue up front and despite a scare over his ankle, Lucas Perez was in full training yesterday so he should get a chance after his impressive cameo on Tuesday night. A midfield duo of Ramsey and Xhaka with Iwobi in the 10 role, leaves only the right hand side to consider and it’d be a surprise if Alex Oxlade-Chamberlain wasn’t played there.

On paper a team well capable of getting a result, and with Danny Welbeck a potential body on the bench, we should have something in reserve too if we need it. And we might – because a home tie in the FA Cup when you’ve got nothing to lose and there’s no pressure on you is perfect for the underdog.

Preston are in the top half of the Championship too, they’re not going to be any kind of pushover, so we have to be aware of that. There’s been sufficient rest, along with sufficient rotation, not to make fatigue an issue and we have to start better than we did against Bournemouth.

I know for many the FA Cup has lost its lustre but for me it remains a great competition, and one from which I have incredibly fond memories. Not just from years and years ago, but recently too – and if you’re so invested in other things that you wouldn’t enjoy winning it twice then I don’t know what’s wrong with you.

Let’s hope this sets us on our way to Wembley again today.

Elsewhere, the manager has defended Granit Xhaka saying he’s not a dirty player, but says he has to be a bit more careful when it comes to penalties. The Swiss international was guilty of a clumsy challenge against Bournemouth on Tuesday, and the previous concession against Stoke was pretty harsh in my opinion, but somehow he’s carrying a reputation as a bit of a clogger.

You can see in his game he is not a dirty player. Overall I am quite happy with his defensive evolution. He is less spectacular in his tackling and he stays more on his feet. He uses his body better to win the challenges and his recovery runs are stronger when the ball goes behind him. He is much more focused defensively than before. He has improved a lot on that front.

And I think he goes about his defensive business quietly and efficiently. It’s not thunderous tackles like Coquelin, but he’s there in the right place a lot of the time and that’s what you want from a player who isn’t ever going to the quickest or most mobile lad in your team. Positioning and reading of the game are crucial, and I think we’re beginning to see that he does that well.

Also, I’d suggest that three yellow cards and one ludicrously harsh red – still up there with the worst refereeing decisions of the season (and that’s saying something!) – is a long, long way from dirty. What about Danny Rose with his 8 yellow cards in the Premier League alone, or does that not count because he’s English and playing for the media darlings at White Hart Lane? There are well over a 100 players with more yellow cards than him in the league. He has the same number of Premier League yellows as that well known hatchet man, Petr Cech.

And he’s in there with the likes of brutes like Harry Arter, Adnan Januzaj, and Nolito when it comes to red cards. And look, there’s no doubt he had his disciplinary issues in Germany, but since his arrival in England there’s nothing we’ve seen from him that provides any kind of substance to accusations that he’s dirty.

If he’s tough, if he’s a bit physical, doesn’t let himself get pushed around, or makes the odd snide foul, then I’m absolutely fine with that, but if he’s being held up as some kind of modern day Vinny Jones while others are far more deserving of that reputation, then we can safely ignore it as media driven nonsense.

Right, we will have a live blog for you later on, all the post-match coverage too over on Arseblog News. Just a reminder that if you haven’t listened to this week’s Arsecast with Adrian Clarke talking Bournemouth, Giroud etc, and a look at stats in football via StatsZone, check it out below.

Catch you later for the game, have a good Saturday.