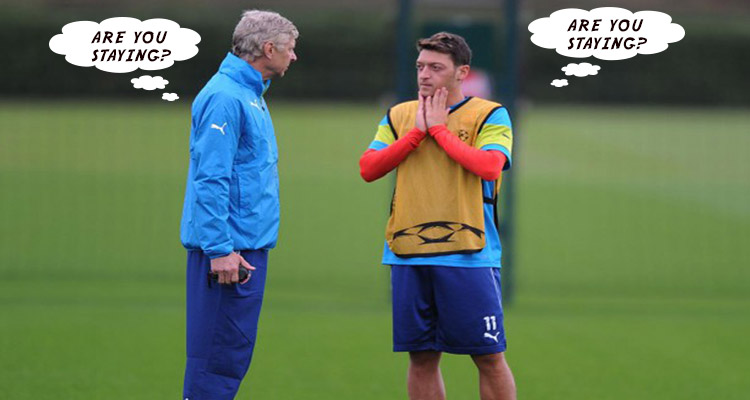 Morning and happy Monday to you all. Hope you had a great weekend, and here we are again with a new week stretching out ahead of us.

I guess the only place to start this morning is the interview which Mesut Ozil gave to Kicker, talking about his future and in some ways linking it to Arsene Wenger whose contract situation lends itself to that. The manager’s current deal runs out in June, and while the German says he’s happy to commit, he also wants some clarity about the manager’s future too.

On the contract itself, he said:

I am very, very happy at Arsenal and have let the club know that I would be ready to sign a new contract. The fans want that I stay and now it is just down to the club.

All well and good there, just what we wanted to hear. He then speaks about Wenger, and says:

A couple of things occur to me here. Firstly, I don’t think it’s unreasonable at all for a player to want some clarity on the managerial situation at a club he’s about to commit the peak years of his career to. I don’t even necessarily think he’s saying that his future depends on Wenger staying, just that he wants to know what’s going to happen.

For me it’s also perfectly normal for a player signed by a particular manager to be fond of that manager, especially when they’ve been shown a great deal of trust by that man. If they have a good relationship then it’s easy to understand why uncertainty over the future would play a part. Yes, a player should play for the club first and foremost, but you can’t simply remove the human element, life doesn’t work like that.

Think back to when Ian Wright and Bruce Rioch clashed during the Scot’s one season in charge. As much as he loved the club, he demanded a transfer because he felt he couldn’t work with him. In the end, that situation was diffused by Rioch’s departure, but the relationship, or lack of one, between a player and manager can obviously have significant repercussions.

Secondly, regardless of your own opinion of Arsene Wenger, or whether it’s time for the club to make a change, it’s one that probably isn’t shared by most of the current squad. He is still a big name, a coach with a reputation for improving players, and there are very few Arsenal players past or present of any stature who have anything bad to say about him and working with him.

It was interesting to see so many comments when this story broke last night from people who now want to dispense with Ozil simply because they want to see the back of Wenger so badly. It obviously speaks to a wider issue, but if you’re willing to part with a genuinely world class talent if it’d go some way to getting rid of the manager then you’re really throwing the baby out with the bathwater.

I wonder what the reaction would be if Alexis Sanchez, himself in a similar contractual situation, said something similar. I suspect he too would want to know what’s going on. And if being on side with the current boss is a bad thing, should we sell off any player that has fondness for the manager? That, I would posit, would be a very long list of players and we wouldn’t have much of a squad left afterwards.

That said, the elephant in the room is Wenger’s contract. If it’s causing delays in re-signing players like Ozil and Alexis, then it’s something that needs to be addressed. However, both he and the club know that it’s a delicate situation. For many it’s one that has gone beyond the point where it can be redressed. I’ve seen people say that even if he we were to win the title he should go.

On hand I understand the fairytale ending which sees him leave in a blaze of glory – but when achieving the success they want so badly from a new manager isn’t enough, how can you get those fans back on side? I don’t think you can. The consistent message from the board and the manager is that his future will depend on how successful this season is, but then we have the issue of what is success?

Is it winning the title? Is it competing for the title right to death where we might be pipped to the post by a slightly better side? Is it winning the cup? Is it going further in Europe? Everyone’s perception of what’s a successful campaign will differ to some extent. There are people at both ends of the scale, while many more exist inbetween, willing and waiting to see what happens.

I’m still not 100% convinced he’s going to stay. There’s a large part of me that thinks he wants to, and I don’t believe the board have even really considered life without him, but I have a nagging doubt, so it’ll be interesting to see how this second half of the season pans out. I know he’s insulated to some extent from the angriest voices, but he’s not a man who lives with his head in the sand either.

Anyway, as ever with football the whole situation, from Wenger to Ozil and the other players whose futures are important for this club, is complicated. We might get some clarity if decisions are made relatively soon, but until then it’s going to feel like things are up in the air a little bit. And as much as they’re all professional, it will add to the air of uncertainty a little bit.

Maybe it’s something that affect us as fans more than it does the individuals involved, but it’s hard to ignore the fact that Ozil and Sanchez signing new deals would be a real boost for everyone. Would another two years of Wenger be worth that if that’s what it took?

Right, James and I will be here later to discuss this story and everything else in the Arsecast Extra. If you have any questions or topics for discussion, please send them to @gunnerblog and @arseblog on Twitter with the hashtag #arsecastextra.

That’ll be available for you before lunchtime, until then.