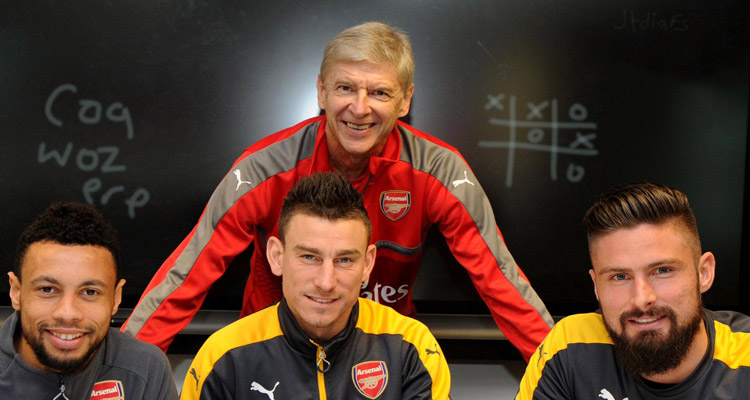 Good morning. It’s cold. I really don’t like the cold. I don’t see the point of it other than to be the opposite of hot, which I really like.

Anyway, I don’t need to turn this into a 3000 word diatribe about coldness, which I could easily do by the way, so let’s focus instead on the big news from yesterday which saw Les Contract Extensions for Laurent ‘Kos’ Koscielny, Olivier ‘Oli’ Giroud, and Francis ‘The Coq’ Coquelin. All three have extended their stay at the club in new ‘long term’ deals, according to the official website.

Koscielny last signed new terms in 2014, and his new deal takes him to 2020, showing the manager has some real vision. When you consider how much we paid for him back in 2010, he’s been an absolute steal, and has become one of the best centre-halves in Europe.

He’s also skippered the side with minimum fuss this season in the absence of Per Mertesacker, and he’s a player that makes others do better – as we saw last weekend when Shkodran Mustafi and Gabriel ran around in the first half against Preston shrieking ‘Waddawedooo?! Waddawedooo?!’ before getting their shit together in the second period.

He’s strong, quick, excellent on the ball, and can rock up with an all-important goal when you need one, so keeping him here is just common sense. He might be 31, but players look after themselves so well these days that he’s definitely got more miles on this legs.

Meanwhile, I don’t think there was ever any doubt Coquelin was going to do anything other than stay. Since being recalled from Charlton when all our other midfielders were injured, he hasn’t looked back. I know he’s a player who divides opinion, but Arsene Wenger is a fan, saying:

He has the best defensive statistics [at the club], his defensive numbers are outstanding. He has improved a lot and he is one of the players with the quickest speed in terms of passing – the time between him getting the ball and passing it is one of the shortest. He’s capable, we want to move the ball faster than anyone and he’s part of that.

I have to say I’d be interested in that data, because it’s not something I’d have put down as one of his main strengths. Still, he’s obviously given very specific instructions as to how to play, and when he can win the ball and give it to someone who can add a bit more craft to the move, it does help us play on the front foot.

As for Giroud, this is the one I find a little bit surprising, but only just a little bit. I think he likes it here, he feels comfortable and at home, and there’s no doubt he can make a decent contribution. With the goalscoring burden not 100% on his shoulders all the time, I think we’re seeing a situation many felt would be ideal for him.

In seasons past if he didn’t score, injuries and lack of squad depth meant he had to be played through absolute troughs of form, when clearly it wasn’t good for him or the team. The criticism levelled at him for that was understandable to an extent, but I always felt it went too far. The bigger issue was not having back-up of sufficient quality.

Now, when you look at our goal-scoring options: Alexis, Lucas Perez, Mesut Ozil, Alex Iwobi, Theo Walcott, Oxlade-Chamberlain (to an extent, because he has been scoring), and the returning Danny Welbeck, we have more choice, quality and variety there than we’ve had in years.

It’s also much more competitive, and the deployment of Alexis Sanchez as a striker means that Giroud’s role over the coming seasons will probably be diminished to an extent. And when a player gets to a certain age he generally knows his career only has a limited time left and he wants to play as much as possible (see a Mr M. Debuchy). However, the HFB has committed himself in spite of that.

I guess all you can say is ‘fair play’, because he appears to be willing to be a cog in the machine without demanding much more than that. He’ll work hard, take his chances when they come – as he has over the last few weeks – and maybe he realises that this environment is one in which he can thrive.

All in all though, players like these and extensions like these provide the club a platform of stability, and will go some way to convincing the likes of Alexis and Ozil that their futures lie with us too. They obviously have their own decisions to make, and their own reasons for doing so, but securing the players around them – who help them reach their potential to an extent – should play a part. A positive development by any measure.

For some extra reading this morning: Tim Stillman’s column this week looks at Arsenal’s chaos theory (and contains an accidental Suede reference).

Right, it’s time now for this week’s Arsecast, and to discuss contract those renewals, forward options, Mesut Ozil’s return, the upcoming schedule, and young players taking an unconventional path to the Arsenal, I’m joined by Mattias Karen of ESPN FC. There’s a brief look ahead to the Swansea game, a revealing interview, and all the usual waffle.

We’ll have all the team news and the rest from Arsene Wenger’s press conference over on Arseblog News throughout the day. The Gent will be here with his weekly review later on too.

More from me tomorrow, including a preview of the Swansea game and all the pre-match stuff you could need. Have a good one.