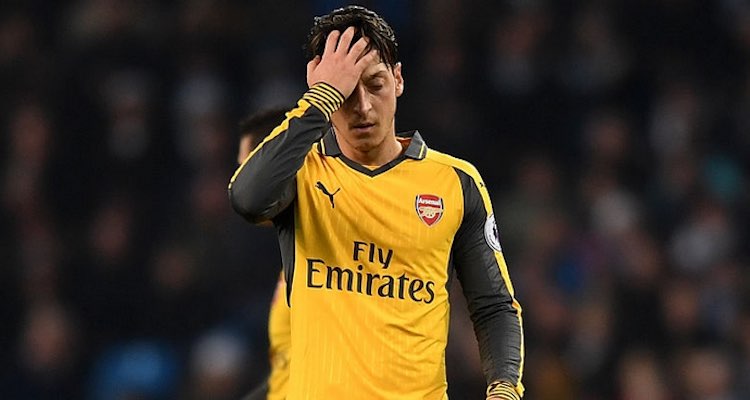 There was a moment in the first half when the ball broke in our box. Gabriel tried to clear it, it smacked Hector Bellerin in the side of the head and rebounded towards goal. Cech made a save but the way things have been going this week, it would have been fitting if that ended up in the back of our own net.

For the second time in five days we went ahead away from home, only to end up losing the game. Tuesday’s defeat to Everton was disappointing, no question, but yesterday’s loss at the Etihad was truly disheartening. In a big game, against big opposition, we underperformed and – not for the first time this season – there was a passive lethargy to our players that is particularly worrying.

I remarked on it after the North London derby when I found it odd how much we sat off Sp*rs, and it was there again yesterday. I’ve mentioned before it’s very difficult to speak in any coherent way about the intangibles. The ‘wanting it’, how much you’re ‘up for it’, ‘desire and passion’, and all the rest, but you don’t need to first class honours degree in body language and sports psychology to know that those things were fundamentally missing from too many of our players yesterday.

The video doing the rounds of Mesut Ozil ambling around midfield summed it perfectly. Of course some of the reaction to it is ludicrously over the top, talk of selling him etc because he’s been excellent at times this season, but at 2-1 down in a game you know you really have to get something from, that lack of effort is simply unacceptable. It’s almost impossible to understand as well but it’s like he’d just given up, resigned himself to defeat after Sterling’s goal, and that’s not the way a top player should react.

It’s not to lay the blame solely at the feet of Ozil, but it was symptomatic of what was wrong with us today. Throughout the game Alexis Sanchez was urging his teammates to get closer to him, to press higher, to show some urgency when City had the ball, but by the end of the game he’d simply stopped bothering because nobody had paid any attention to him. The sight of him on his hunkers late in the game was a sad one for me, because he was about the only Arsenal player who looked like he really cared.

It had all started so well too. A lovely move from back to front saw Bellerin feed Sanchez who spotted Theo Walcott’s run. The reverse pass was sublime, Walcott took it and finished for his 11th goal of the season. Scoring that early against a team who have had such question marks over their defence should have been just what we needed to mount an assault, but instead we sat back and allowed City to come back into it.

In some ways I understood the tactic of soaking up pressure, looking to hit them on the break away from home, but it’s a dangerous one as it proved. We did have our moments in the first half, but as it went on they grew in confidence, probably sensing there was something up with the way Arsenal were playing. It went beyond the normal caution you see when you play a big team away and early in the second half they were level.

First, I think it’s completely offside. I couldn’t understand how on Sky they were insisting it wasn’t as they showed replays that it clearly was. However, the defending was poor as nobody was alert to Sane’s run, and I do wonder if Petr Cech might have done more as he could see it all unfolding in front of him.

It also made the decision to flag Nacho Monreal offside right at the end of the first half more frustrating. It was probably our best bit of football of the game, but the flag went up as Iwobi drilled the ball into the bottom corner. 2-0 at half-time for us would have been a different game. There’s literally no difference to how ‘offside’ Monreal and Sane were, other than the flag stayed down for the City man. Them’s the breaks though.

So, 1-1 two minutes into the second half and now you want to see a response from Arsenal. What are they made of? Is this a team that can deal with that kind of blow during a game? The answers were less than impressive. As the second period went on our inability to control and keep the ball meant the pressure grew and grew. Cech saved from Sane, he saved from de Bruyne, but when Sterling cut inside Monreal and drilled a shot into the bottom corner, the keeper was beaten at his near post once again.

Horrible defending, bad goalkeeping, and yes David Silva was offside and waving his leg at the ball, not as passive as some were insisting post-game, but all we can control is what we do. And what we did wasn’t good enough defensively. Still, that was the 72nd minute and you have 18 minutes plus injury time to get something from the game. This is where yesterday was really painful for me, because it reminded me of Man Utd last season when we had the best part of 25 minutes to save our title challenge, and played pitifully for that period of time.

There was tiny bit more from us as the natural momentum of a game means the side in front look to defend their lead, but nothing of any significance. Giroud came on, Oxlade-Chamberlain went off injured having come on a few minutes before that, and the manager’s decision to replace him with Elneny rather than another forward seemed to be more or less throwing the towel in  – even if the Egyptian did provide some balance in midfield.

Afterwards, Arsene Wenger railed at the referees in odd fashion about the two offside decisions, and look, I think he’s got a point. They were both offside, but this was over the top and designed purely and simply to deflect the headlines away from the paucity of his own team’s performance. To that extent, it worked, because the back pages are all on about refs and lions and zoos, without much being said about how dreadful that second half was from Arsenal.

He will know fine well that in a game where his team and big players had to stand up and be counted, they let themselves down. And questions have to be asked of his role in it: why can’t he get them up for these fixtures? I don’t think there was much wrong with the team selection, and when you start a game that well it should be the springboard for a big performance. Instead, away from home once more, we were simply unable to do ourselves justice. It has to be a psychological thing, that New Zealand fella has got a lot of work to do with this lot, because it’s now almost part of the fabric of Arsenal under this manager.

We were terrible against Man Utd, poor against Sp*rs at home, poor against Everton on Tuesday, and yesterday was the mouldy cherry on top of the icing on that unpalatable cake. City reacted to a relatively poor first half with a tactical change that made things more difficult for us, while we seemed unable to rouse ourselves from the torpor that ran from back to front (bar Alexis for the most part).

This was a day when we needed this team to make a statement about their title chances. I think they did that, but sadly it’s not the one we were looking for. It said: We don’t want it, we’re not up for it, we can’t cope with the pressure. And after a generally positive start to this season, that hurts.

A little over a week ago we were top of the table, albeit temporarily, now we’re 9 points behind the leaders. That’s a crumble of epic proportions, there’s no getting away from that or excusing it. The only thing that provides a glimmer of hope is the fixture list which is relatively kind over the next few weeks. However, if we even get close to that kind of performance again, we’ll drop points against those sides we’re expected to beat.

I don’t even want to hear the words ‘respond’ or ‘react’ at this point. The only talking anyone should do is on the pitch, because yesterday was just not good enough.

James and I will here later this morning with an Arsecast Extra for you. If you have questions or topics, please send to us on Twitter @gunnerblog and @arseblog and we’ll get to as many of them as we can. We’ll have the podcast available around lunchtime.