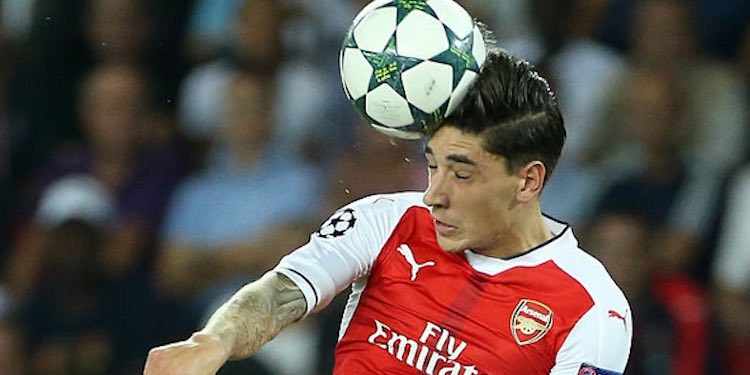 Morning to you, happy Friday and all that. The Interlull is in full effect now. I’ve spent most of my week blocking Man City websites and blogs on NewsNow because of incessant stories about Hector Bellerin and how much Pep Guardiola loves him. Apparently he loves him as much as Grant Holt likes cake. I heard Grant Holt tells everyone he’s getting married every year so the lads take him on a stag-do and then bring out a giant cake from which a stripper is supposed to emerge but he just insists on the giant cake because he loves cake.

Anyway, Man City and Hector Bellerin. Doesn’t work for me. It’s not like a classic combo like bacon and cheese, or bacon and egg, or bacon and bourbon. Or even Hector Bellerin and Arsenal. It’s a bad combination, like drinking orange juice after you’ve just brushed your teeth, or being stuck in the middle of Michael Owen and Robbie Savage on a really long journey somewhere.

As we read reports of how both Alexis Sanchez and Mesut Ozil want £250,000 per week to sign new deals with the club, and knowing how crucial it is for us to show that we can keep our top signings, we shouldn’t overlook how important it is to show that we can also do the same with the young, emerging talent we bring through.

Hector is one of our shining stars. Sure, his chance came because Mathieu Debechy’s debut season was ruined by an ankle injury and the Lidl Ibrahamovic from Stoke who pushed him over and broke his shoulder. And yes, Jefferson Montero twisting Calum Chambers to the point where he thought his name was Clllmm Chmmm played a significant part in that too.

However, the main point is that regardless of how opportunity knocked, Hector answered and said ‘Come in, settle down, have a nice cup of tea, because you’re not getting out that door again.’ His full debut against Dortmund wasn’t particularly inspiring, but then that night the team played like a pack of somnambulant sloths who had just taken a couple of sleepy-wotsits, but after that, oh boy.

A Spanish Kray Twin lookalike bombing up and down the wing like Billy Whizz on whizz. He attacked with vim and vigour and defended like a trojan. His pace saved us more than a few times. I mean, look at how much ground he makes up here:

There are other examples, of course, and we saw something similar the other weekend against Chelsea when Pedro, hardly a slouch, was sent clean through but all of sudden Bellerin came storming over from the right, overtook him, slid in and won the tackle. Pedro was left all ‘WTF? HOW?!’, but the how part is easy – he just got Hectored right in the Bellerin.

The fact that Bellerin is absolutely fantastic immediately lends credibility to stories linking him to other clubs. Why wouldn’t Barcelona or Man City want him? So there’s a bit of gamesmanship going on here, which is why we have to show that the days of us losing young talent are done and dusted. To be fair, I think they are behind us for various reasons which we’re all aware of, but a new contract for Bellerin is also a bit of a statement.  Fancy a bit of our Hector, do you? Well bam, eat our dust suckers, because he’s staying here (for now anyway).

Going back to the Ozil/Alexis story, for a second, if they do get something close to the wage the story says they want, it won’t just mean that we’ve held on to two of our best players. good and all as that will be. There are knock-on effects throughout the squad. Players will think ‘If they’re getting a massive X and I’m only getting a much smaller Y, then we need to talk about that’.

I think everyone understands that there’ll be a disparity between the very top earners and those below, but if that gap is considered too wide then it can cause some issues, and that’s one of the challenges the club has to deal with during negotiations like this. You want to give the best players what they want, but don’t ignore the fact it will trickle down throughout the squad.

Hector Bellerin, along with Nacho Monreal, has started more games than anyone else this season. As it stands, we don’t really have any back-up for him. Debuchy seems to have disappeared, taken out deeper into the woods this time after he inconveniently found his way back for a day or two, while Carl Jenkinson is back in training and closing in on a return, but isn’t available just yet.

His importance to the team is obvious, and if this press-based posturing is part and parcel of negotiations to improve his terms, then that’s just the way it goes. We’d be wise to ensure that we don’t get blinded by Ozil/Alexis and remember there are other key components to the side. Alex Iwobi, for example, is another player whose contract might well be improved even though he only signed a new one fairly recently.

If he’s starting every week alongside players earning multiples of what he’s on, it can create a problem. He seems like a very level-headed young man, and I hope he has the right people around him and the right advice, but as we’ve seen before it doesn’t take much to turn a footballer’s head if they’re convinced, rightly or wrongly (usually the latter), that they’re being unfairly treated.

Anyway, I’m sure the club are very much aware of all this, and are doing the necessary. Keeping Ozil and Alexis would really help consolidate matters as two of our best mature players commit their best years to Arsenal. Ensuring we’ve also got the next generation wrapped up would be the icing on that particular cake. Make it happen.

Right, that’s just about that. There’s no Arsecast this week because of the Interlull …. boooooo, I know, but don’t blame me. Blame nation states, if they didn’t exist we’d have football and a podcast today. We will have an Arsecast Extra on Monday though.

For extra reading, here’s Tim Stillman on an Arsenal moving away from Olivier Giroud and Per Mertesacker. Till tomorrow.