There was a segment on Match of the Day when the commentator was extolling the virtues of Francis Coquelin before he was cut off. In it he was saying, as Coquelin drove through the midfield, that “he has had a good game actually, not just in a defensive sense but…” before Alexis took the ball and shot over the bar.

In a sense, this is how the debate around Coquelin is usually structured; there’s always a condition, a caveat after a criticism/praise. And indeed, after his performance in Arsenal’s 2-1 win over Southampton, those on both sides of the argument found it hard to make a convincing case for his continued presence in or out of the starting eleven.

To begin with, Coquelin had a decent game, though his defensive contribution wasn’t quite what we’re used to. That’s not to say his numbers weren’t good: he made 5 tackles, 4 interceptions and 6 ball recoveries but his allure is in part tied to the way he appeals to our visceral sense, propelling himself into challenges that leave shark-like ripples after he’s attacked. There were none of those trademark lunges; instead he tended to operate higher up the pitch, sensing the moments where he can quickly snuff out a counter-attack. This is where John Motson’s comments on Match of the Day seem to stem from: because Southampton played so deep, Coquelin’s contributions were actually mainly attacking, knitting up play due to his advanced positioning.

But some people also don’t get that this is also down to the way Arsene Wenger uses Coquelin in midfield, a strange role that means criticisms of the midfielder actually tend to be these days, a veiled attack on Wenger.

If ever there was a better example of Wengerism at its most extreme, then it is probably the “Coqzorla” partnership. The manager has always been seen as an idealist, but the charge levelled at him recently has been one of a fundamentalist, especially where it concerns tactics. Indeed, with the rise of coaching literacy and the prevailing idea of playing through the holding midfielder, the strategy called in Spanish “Salida Lavolpiana” (named after the Argentinian coach Ricardo La Volpe and as popularised in recent times by Pep Guardiola). The idea is that the pivote drops deep, in between the two centre-backs, stretching the play sideways sending the full-backs up the pitch – this allows the team to create numerical superiorities ahead of the ball.

Arsenal don’t do this. Instead, Wenger asks the central midfielders to push up the pitch, creating space in the middle of the pitch for the centre-backs to pass through. The idea thus, is to push the opponents back with them to discourage the press, or if they do, it opens a large space in the middle for Mesut Ozil, Santi Cazorla or one of the wide midfielders, like Alexis Sanchez, to drop into. Francis Coquelin’s role in this is to be a decoy, not really offering himself on the ball, but moving all over the pitch to take the opposition markers with him. Against Southampton, he did this many times, taking up positions between-the-lines with his back to goal as if he was ready to receive the ball, but instead the centre-backs would use him to find Santi Cazorla unmarked. The pass chart below illustrates this dynamic nicely, showing how Coquelin tends to vacate the space in the middle and that Cazorla then is able to move into it. 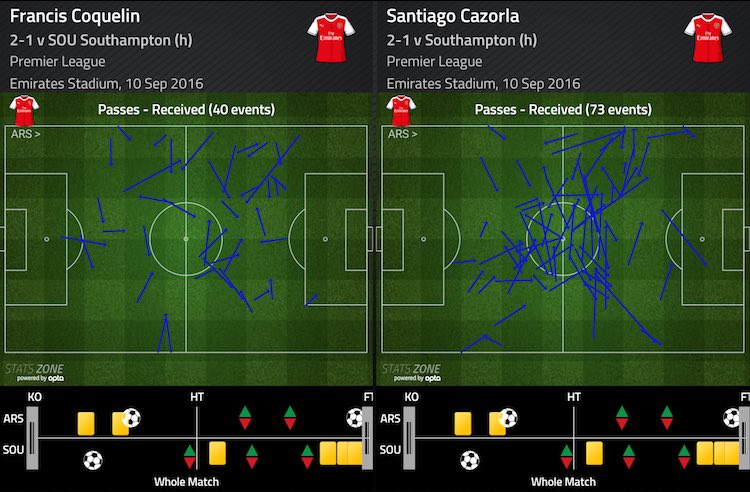 As a result, everything did tend to go through Cazorla, though it wasn’t easy for him to influence the game. Southampton defended deep, using a narrow 4-3-3, and that meant Cazorla often had to go slightly wider of the centre-backs to receive the pass, or come back towards his own goal once the ball had been played forward to get possession. Ozil also struggled, tending to slant towards the right-centre position to get the ball. Indeed, his normal position between-the-lines was clogged such that you could say Coquelin was getting in his spaces.

Actually, there were many times that Coquelin did get the ball in between-the-lines, but his unwillingness to really want to be in those positions tended to hamper moves. He did help spark the the aforementioned Alexis chance which was blazed over, but any possession he got seemed almost accidental, completely without rhythm. There were some bursts, some quick one-twos but usually the pass would go back, or he would spray it wide to the flanks. Thankfully, his tight-dribbling is good meaning he’s not a completely wasted entity there.

The upshot, though, of playing high up is that Coquelin can then win the ball back quickly if moves break down (see video above). Indeed, what the early fixtures have told us this season is that Coquelin is a front-foot defender, and that’s why Wenger prefers him in home fixtures where Arsenal would generally be playing in the opposition half. If moves broke down, then Coquelin’s acceleration and cleanness in the tackle allows Arsenal to can recover balls quickly.

That’s not to say Arsenal didn’t encounter problems as Southampton were offered some good counter-attacking opportunities. In one moment, conveniently featuring Coquelin, he lost the ball from a throw-in, and Southampton were then able to play the ball quickly behind the defence. Thankfully, Coquelin was on hand to get back and block the shot. The big chance that fell to Southampton, when Shane Long clipped a shot wide, came after a move broke down up the pitch and the midfield was unable to funnel back quick enough. It meant the back four largely had to try and stop the break on their own. Fortunately, Arsenal have some of the best recovery defenders in the league, and though the shot was sent wide of the post, this kind of opportunity happens too often which hints at structural issues, which I pointed out after the defeat to Liverpool, and problems with the team’s counter-pressing.

Indeed, we saw the other side of the defenders’ game when first, Laurent Koscielny equalised with an overhead kick after Southampton took the lead following an own goal from Petr Cech. And then, in the dying minutes, new signing Shkrodan Mustafi found himself in acres of space in the opposition half and delivered a sumptuous pass over the top for Olivier Giroud. The striker was fouled and after a long wait, Cazorla was able bury the penalty down the middle of the Southampton net.

The pass showed exactly why Wenger signed Mustafi. In this system, the centre-backs must be also able to pass out, but being that high up the pitch has usually exclusively been the domain of Koscielny. Indeed, The Gunners at times rely on the Frenchman to create play when they are lacking ideas but now there are two defenders who can step out and start attacks., and Mustafi popped up in this position many times in this match.

Granit Xhaka remained on the bench, rested for the game against PSG, though it’s hard not to see that he how can offer more orthodox solutions to Arsenal bringing the ball out. However, he’ll also have to submit to the way Wenger wants the team to build up because the key in his philosophy is verticality. Xhaka might come towards the ball more often than others, but he also would be expected to push up the pitch at times so Arsenal can play more of the game in the opposition half.

A Xhaka-Cazorla partnership just seems eminently more suited to what Wenger is trying to achieve. Because imagine now, Cazorla in the positions that Coquelin is in between-the-lines. It just offers so many more solutions. And if he wanted to increase Arsenal’s ball-winning capabilities, he can put Mohamed Elneny in the side in front of Xhaka. For now it seems, we must put up with this particular Wengerism, and hope the individual quality there is in the team shines through.