Arsenal 3-0 Chelsea: That was good and I liked it

Yesterday, in real life and on Twitter, many people suggested that my presence in New York was a ‘lucky charm’ and that I, along with James from Gunnerblog, should stay here. This would apparently ensure we win the league.

Folks, I’m prepared to do that. If you want to crowd fund a $300 a night hotel room for me, I’m all for it. I know Mrs Blogs might take a bit of convincing but it’s for the greater good. As soon as we complete the quadruple I’d head home. It’s all good.

So, yesterday was fun. A really lot of fun. James landed in NYC about an hour before kick off. He got straight into a cab but New York traffic is a bit difficult, it’s fair to say, so I kept him up to date via text messages. I think this screenshot sums it all up: 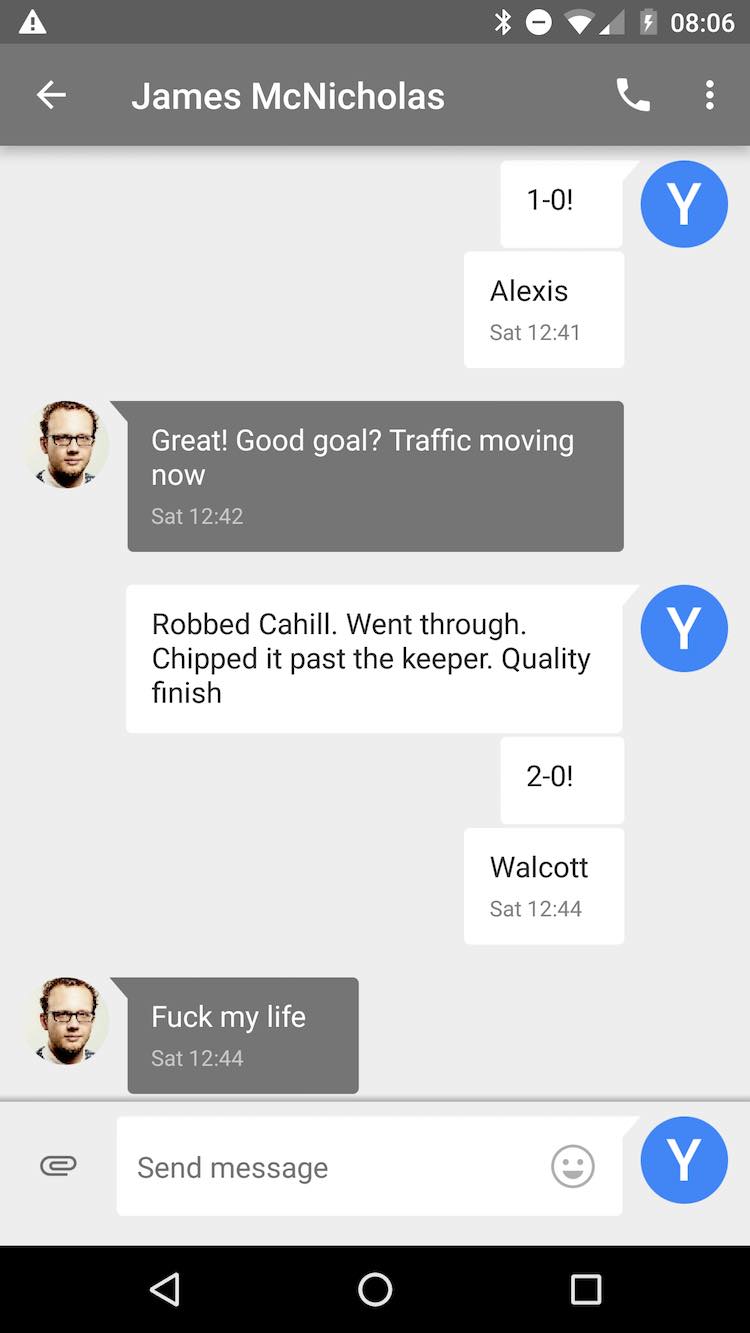 But wow, what a win that was. There were shades of Man Utd last season, going 3-0 up by half-time then just controlling the second half, but there was a bit more to this one I think. Diego Costa was really furious at how things went, and any day that hyperbastard is unhappy is a good day for Arsenal fans. Or people in general but I don’t care about them at all, only that Costa is losing his shit.

It started so well. Alexis robbed Gary Cahill then went through on goal. I thought that he’d held onto it too long but he got close to the keeper and just chipped it into the net. It was a delicious finish and Chelsea players and fans and management were very unhappy about it which is like winning the lottery and then discovering a secret room under your house that you never knew about filled with gold bars.

Not long after that we did this other thing that we did all day where we played lots of first-time passes and Alex Iwobi felt really bad for Hector Bellerin because he was standing all on his own with no friends so he gave him the ball and he crossed it and Theo Walcott was there to put it in to make it 2-0. He was really good yesterday was Theo, trying very hard and all that, I like it.

Then Mesut got the third. Man, he really loved yesterday. He played so well and there was that amazing ‘WATCH ME NOT LOOK!’ no-look pass but the goal … ooof. The turn that made Kante look like, I dunno, a Leicester player or something, then the finish which I choose to think was entirely deliberate was just brilliant. Sometimes we say a player deserves a goal but he really, really did and I enjoyed it as much as he deserved it.

Much like the win over Man Utd last season, we then controlled the shite out of the second half. We had chances to score more goals, but the decision making wasn’t great. To be fair, you can forgive that when you’re 3-0 up, and then there was that bit when Diego Costa got really angry.

He was running alongside Koscielny who just decided to bump him over so he bumped him over and Costa fell down, got up and ran at the referee as if he wanted to kill him but didn’t run at Koscielny because he knew he’d just end up back on his fat, evil arse again, the fat arsed evil mickey-twister. Seeing that man unhappy is a wonderful thing. I enjoy it probably more than I should but I make no apologies for it and I never will.

I feel, especially in the first half, we wanted to play with high pace, put them under pressure, play at a very high collective connection and speed of passing – it worked quite well. It’s one of those moments in your life as a manager where you think ‘today is a great day’.

In the first half, I think it was nearly perfect. In the second half it was a bit in-and-out but in the first half, we have shown great quality. We played with style, with pace, with movement – and that’s the kind of football we want to play.

The first half really was brilliant. We were so good and so dangerous and of course it makes it even better when you do that to a team like Chelsea. It’s great to beat Watford, but doing it against one of the big teams in the league is just the best.

Collectively we played very well, and individually there were some great performances. Hector Bellerin racing back to tackle Pedro got a cheer as loud as a goal; Theo Walcott worked hard all game, got stuck in, and probably should have had more to show for it; Mesut Ozil enjoyed that game a great deal; and Costa was so unhappy hahahahahahaha. Sorry. I was out late and I don’t quite have words for it, but hahahahaha. Wanker.

It was a win we deserved and a win we needed. Hopefully this will improve confidence and belief. As I said yesterday, results have been better than performances this season, but this was one where the performance was top class and to do it against a team like Chelsea made all the sweeter. Fun times.

Right, that’s just about that. If you are in, or around, New York please come join us this morning at the Barleycorn for an Arsecast Extra LIVE starting at around midday. They have good beer, good food, and James and I will be there taking immense pleasure in Diego Costa’s misery. What more could you want?

I suppose, you could just watch it all again on our video page, but if you can come down it’d be great to see you. Podcast will be available as usual tomorrow.

Have a great Sunday folks. Remember to laugh at Costa. Teach your children to laugh at him too. It’s important. Till tomorrow.