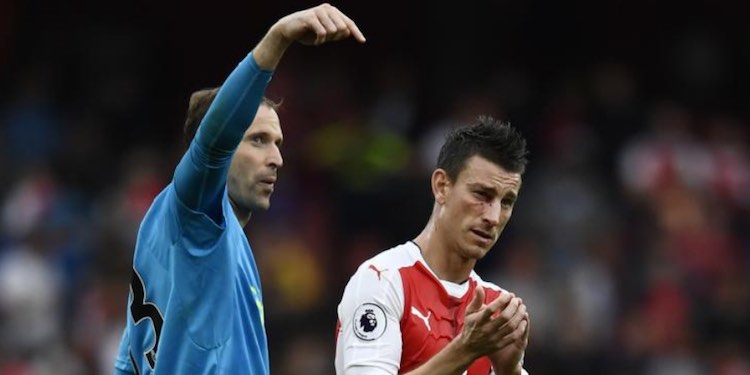 Some people will tell you there’s nothing like a late win. I have to admit, I’m very fond of it when it happens. Especially when in the build up to a contentious goal, a player who got away with a sneaky foul against us last season is left writhing on the deck after an actual foul from one of our players.

The pressure was on Santi Cazorla, and the delay between the award of the penalty and him taking it was considerable. Koscielny needed treatment, Southampton players were very unhappy and a few of them got booked for demonstrative shows of petulance and toddlerish grumpiness, but the little Spaniard stepped up, hit it more or less down the middle, and made it 2-1. There were a couple of minutes of ‘GET RID!’, before the ref blew his whistle and the game was done.

Having worked hard in the second half but failed to find a way through, it felt like the sort of thing we were going to need. Another set-piece goal, or a free kick, because as a team we didn’t really play with the kind of fluency we’d have liked. It would also be fair to say that we got away with giving them a couple of very, very good chances to go ahead, but thankfully Shane Long was as good at finishing yesterday as he was at getting obvious free kicks, and spurned three good opportunities. One in particular, when he was clean through with just Cech to beat, was hilariously bad in the cold light of day, but on another day we’d have been genuinely punished and in trouble.

Southampton began the game fairly brightly but if they want to bemoan our penalty, then I can bemoan the award of the free kick that gave them the lead. Monreal never touched Redmond, who leapt into the air like salmon nicknamed Luis Suarez, and the referee handed out a booking and gave them a great chance from inside the D. Tadic took it, Cech got a touch but it rebounded off his back and in for an own goal. More than a bit unlucky all told.

Our response, when it came, was outstanding from Laurent Koscielny. From a corner Coquelin, and then new boy Lucas helped keep the ball alive, and the Arsenal captain produced a superb overhead kick to make it 1-1. It’s the kind of goal you’d take your hat off to any striker for, so for a central defender to score a goal of that quality … oooof. Really brilliant, from a genuinely brilliant player who is so so important for us. As much as we’re a different team with the likes of Ozil and Alexis in it, the same applies to Koscielny. Let’s hope the swelling isn’t so bad that he’ll miss PSG.

In terms of possession and territory, we controlled much of the second half, although it felt like the pieces weren’t quite working together as well as they should. I could see the manager’s reasoning in leaving out Xhaka and Alexis – but we missed them from the Watford performance. Up front Lucas got little in the way of service and I would have liked to see how he might have clicked with Alexis, but he and Oxlade-Chamberlain (disappointing again) made way for the Chilean and Olivier Giroud.

There were some chances, Alexis shooting over, Giroud heading wide, Monreal firing wide too, but we didn’t work the keeper a great deal (on that, fair play to the referee for giving him the inevitable yellow card for time-wasting quite early in the second half, rather than with just a couple of minutes to go when it means nothing). It looked as if we might drop further points at home, but then Long hahahahaha and we’ve covered the rest.

It’s a relief. When you lose your first home game, you cannot afford to drop points in the second home game because it creates a little bit of anxiety at home and that’s not what we really want. In the second half I felt we dominated well again and created many dangerous situations but couldn’t score.

And I guess that is a bit of a concern. Maybe there are mitigating factors. It’s the first game back after the Interlull, we had two new players playing, we’ve got one of our attacking three going through the absolute doldrums (and you could see on the Ox’s face he knows it too), some important players back late or rested because of internationals and the manager is trying to use his squad ahead of a big Champions League game, and Southampton are difficult opposition, but there was a familiarity about the way we played that isn’t just from this season either.

One of the problems from last season was the lack of cohesion in our football, the absence of an identifiable style – especially in our attacking play – and that was present against yesterday. I thought against Watford we looked to be on the right track towards something, but yesterday was more like the last campaign than this. I suppose with all the options and new faces he has it’s going to take the manager a while to figure out his best team, the best combinations and partnerships etc, and he’s hoping a little momentum will help in that regard:

It is a win after Watford, that is two wins together. If we can put a few wins together, of course that will help us to be more confident and to get to a very fluent level like we want to play.

I guess my point is that as much as I like a late win, and as much as I like Shane Long being fouled and us playing on etc, I also like when we play so well that the opposition don’t get a sniff, and we’re not scrambling around until the last minute. I think that’s more what we should be aiming for, and to be fair there were signs of it against Watford. There’s a lot to like about having the character to keep going etc etc, but it is going to be hugely important over the coming weeks to find more fluency in the football we play. You just can’t grind wins like that every week.

Still, it’s a Sunday morning and we have three points in the bag. It’s also much better trying to work out issues having won a game than having dropped points, so from that point of view I think we can reasonably content. PSG will provide a different kind of test on Tuesday.

A quick word on the new boys. Mustafi grew into the game well, after a couple of first half moments when perhaps he tried to force things a little. The more he plays with Koscielny, and those around him, the better he’s going to be, but he looked pretty comfortable. Lucas had less involvement, but struggled to get much from those around him, especially in the first half. We were never able to play to his strengths in any way, so we’ll have to see how he goes in the weeks ahead. The manager reckons they’re both a bit behind in terms of fitness, so they’re obviously going to need a few games to get properly up to speed.

Right, that’s that for this morning, other than another quick hahahaha at Shane Long. What goes around and all that. Till tomorrow.