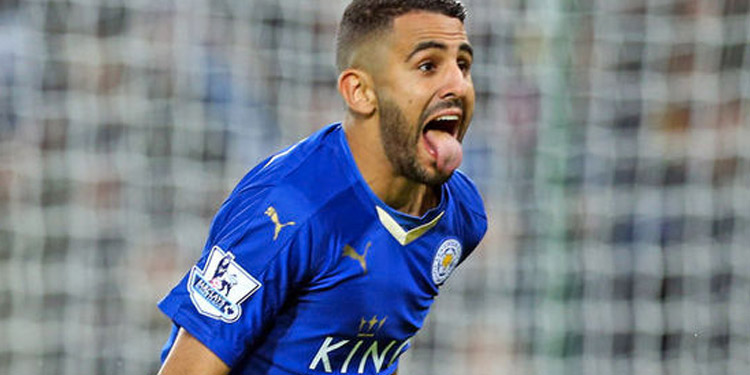 Happy Sunday to you all. A very quick round-up of what’s going on, and yesterday French Eurosport – which we all hope is the most reliable Eurosport of them all – ran a story which said that Arsenal and Riyad Mahrez were totally going to hook up.

We ran a story about this on Arseblog News and it sent the server into a meltdown which lasted about three hours, so you can gather from that that there’s a real appetite for this one to happen. And why wouldn’t there be? Exciting, creative, skilful, assisty, scoringy PFA Player of the Season wide man to add something to this team that it really needs.

I wrote about him on the blog last week, and I have to say I would be delighted if this were true, not simply because it’s a signing but because it’s one that you could really see making a difference to the way the team plays. Eurosport mention a fee of around €40m but I’m not that interested in what it costs, to be quite honest.

Did you see how Riyad is happy. He played so well, worked so hard for the team, he scored a goal and he stays with us. It is very important (to keep him); he is one of our stars.

Other teams maybe have more stars and maybe he doesn’t play at the same level, because maybe is on the bench so it is much better he stays with me.

Now, if you’re talking about Barcelona being interested then that’s a very fair point. It’s hard to see him get into a team with Neymar, Suarez and Messi. However, it wouldn’t quite the same at Arsenal where his competition – as it stands – is not quite as intense. He would walk into our first team and stay there, so while I understand Ranieri’s words and his desire to keep him, there’s no good reason for Arsenal not to buy him if they can.

Much like the Vardy situation, you would expect that Mahrez has release clauses in his contract which could be triggered by us should we so desire. At that point there’s little Leicester can do but hope he refuses the move, or offer him more to stay. The world is too weird to be definitive about anything these days, but you’d like to think that we could tempt him from both a footballing and financial point of view. Let’s see.

The Sunday Mirror say today that we’re planning a ‘double swoop’ for Mahrez and Alexandre Lacazette, the Lyon striker who has reportedly told his club he’d like to leave this summer. It would certainly transform our forward options and put us in much healthier shape going into the new season.

When you look at the forwards on the list for the upcoming trip to the US, it’s clear that we need to do something pretty quickly, so if this is where the cash is being splashed, then fair enough. You’d be hard pressed to say that Lacazette was the ‘world class’ striker we all want, but when Juventus are paying €94m for Gonzalo Higuain, a great player but one who will be 29 in December, spending less than that on two players is probably better bang for your buck.

Once, you know, we actually do buy them and that. Which I hope we do. Because that would be good and maybe people could learn to love each other again.

Meanwhile, our U18s are in crisis. After Thierry Henry chose to work for Sky rather than continue his coaching role, Tony Adams has now decided he’s not up for the job and will instead take on a ‘lucrative’ role at Chinese club ‘Chongqing Lifan’. Which is nice for him. I hear he’s a big fan of Chinese food or, as they call it in China, food.

Right, that’s your lot, have a great day, more from me tomorrow.