Good morning to you. Last night I watched the Europa League final with the Mugsmasher in a pub which was filled to the brim with other Mugsmashers.

He enjoyed the first half quite a lot, and I don’t blame him. Liverpool were quite good, whereas Sevilla weren’t, and then Daniel Sturridge scored a quite fantastic goal with the outside of his foot. You could almost hear the applause coming from Tomas Rosicky’s house. Remarkable Rosicky fact, his right foot is actually perfectly symmetrical, he’s got two outsides of the foot even though one of them is, by its very nature, on the inside.

Anyway, 1-0 at half-time and it was all looking good, but as the second half began I heard the Mugsmasher’s words echo in my mind. “Watch out for Alberto Morenooooooooo. He is really terrible at defending. And that.”

And he was right. Maybe it’s just me but there’s something about his face that makes him look like he was a teddy bear given a chance to be brought to life as a human. I think we all know that for the most part stuffed toy animals are indolent creatures at the best of times, lying around doing nothing but getting picked up and hugged. That is certainly evident in Moreno’s defending. And it helped Sevilla make it 1-1.

Then it was 2-1 when James Milner couldn’t move his Easter Island statue-sized head fast enough to track a runner through midfield and Coke scored. It’s a shame Sakho wasn’t played because he’d have been on Coke all night long. And then it was 3-1 and it looked as offside as offside could be to me, but apparently it wasn’t and then that was that. Not even Joe Allen could save Liverpool this time.

What a remarkable record Sevilla have in this competition though. Since 2005-06 they’ve won it 5 times (there’s a song in there somewhere), and this is their third triumph in a row. The Mugsmasher wished all kinds of ill-will to the Spanish side but I think he should look closer to home and lay the blame squarely at the feet and head and cotton-heart of Moreno. 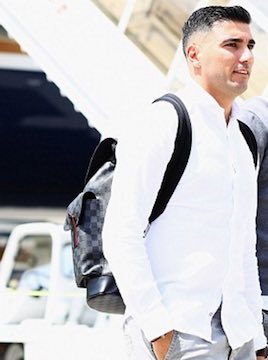 Jose Antonio Reyes was there but didn’t play. I did like the look of him though. I applaud that he is beginning his transformation into middle-aged Spanish man brilliantly. Soon he will be as wide as he is tall, the colour of an mahogany dresser, with a stubby cigar sticking out of his mouth and a little dog with a huge underbite by his side.

‘Come Hidalgo,’ he will say. ‘Today we must drink coffee and beer in the sunshine,’ and the dog will ensure that his butthole is sparkling before waddling up the road after him. It’s the life we all crave, let’s just admit that.

Afterwards, Michael Owen, who is paid actual money for his opinions on football, said this. Imagine we all knew so little about our jobs. What a mad, dangerous place the world would be.

‘Doctor, I have a massive tumour growing out of my neck.’

‘Don’t worry, that’s not a tumour. It’s a love lump. You have too much love to give and it’s trying to get out.’

If I was that bad, this would be one of my blogs:

It goes some way to further convincing me that the universe we know is some kind of computer simulation and this kind of stuff is the programmers having a laugh at our expense. They’re sitting there watching us go mental and breaking their balls or fannies because ladies can be programmers too. Seriously, there can be no other explanation.

So, what’s going on from an Arsenal point of view? Not a whole lot really. There are ‘reports’ saying that we’ve got our beady eyes on striker Alvaro Morata. The 23 year old plays for Juventus but his former club Real Madrid have a buy-back clause which, it’s said, they’re going to activate in order to sell him on for a profit. It reminds us that footballers are not actual people, they are commodities to be traded for as much profit as possible.

Like all of you, I do hope my club spends millions of pounds purchasing other humans from massively wealthy organisations who will, in turn, spend their money on others and the beautiful circle of life will continue.

There was also an update about Granit Xhaka, widely tipped to be our first signing of the summer. The Swiss international was asked if Arsenal was a club he could see himself playing for, and he said:

There you go. I don’t think I need to expand on that in any way, do I? As ever the usual caveats apply when it comes to Arsenal transfers. Don’t celebrate until the guy is signed, sealed and delivered, but I’m told that Stuart MacFarlane, the club photographer, took the photos of Xhaka in an Arsenal shirt 5 weeks ago round the back of the Cock and Bull in Dagenham. Make of that what you will.

Any further news we’ll have it on Arseblog News throughout the day. Tomorrow I’ll have an end of season Arsecast, a round-table discussion of the ups, the downs, the sideways, the diagonals, and the twirling, always twirling of this campaign.