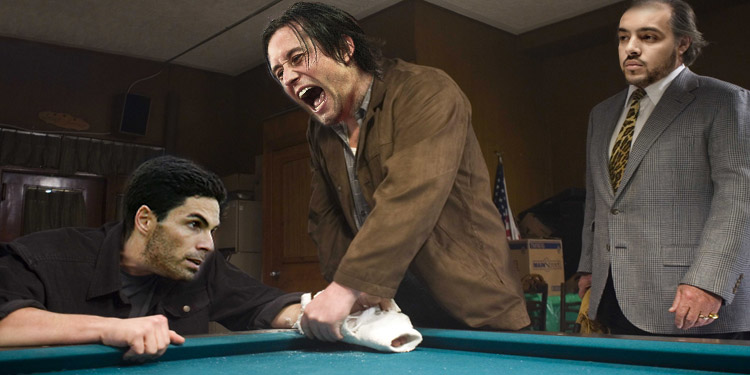 Given that it’s super quiet and radio silence has enveloped the Arsenal land, I thought I might expand a bit on something I talked about in yesterday’s blog.

Speaking about the need for summer surgery, I said, “You look at the squad and there are around 10 players that could go for various reasons, depending on how ruthless we are.”

We got a few comments and questions about who those players are so, in the absence of anything else, let’s go through through them. Some are much more likely than others due to age and contract situation, so here they are, beginning with:

Mikel Arteta: At some point I’ll write a piece about what an underrated piece of the Arsenal puzzle he’s been. At 34 his injury problems have become too much, but in terms of someone who played a big part in steadying the ship, he was an important signing. His contract is up and his departure from the playing staff is certain. There’s talk of him joining Man City to work with Pep Guardiola on the coaching staff. I know Arsene Wenger is often reluctant to use former players, but he’s an intelligent guy whose experience and knowledge of the game means he’s held in huge regard by his teammates. He might be somebody worth keeping close.

Tomas Rosicky: His signing in the summer of 2006 was an exciting one and he’s provided us with some fantastic moments. Unfortunately injuries have had a hugely detrimental impact. He was so gutted when he picked up that thigh injury in the FA Cup, but having played for the U21s last Friday, it does look as if his Arsenal career won’t end ignominiously, and he’ll be able to pull on the shirt at least one more time. Which is great.

Mathieu Flamini: The Arsenal midfield needs reshaping this summer, and there’s no place for Flamini in it. I think he’s derided a little too often, and his re-signing in 2013 was an act of convenience as much as anything else – symptomatic of our lack of transfer bite at the time. However, if we’re to move forward as a team, we need to do better, and he’s out of contract.

Mathieu Debuchy: Rather than stay and help a team involved in a title challenge (at that stage), he agitated time and again for a move and got one on deadline day, going to Bordeaux. With Hector Bellerin firmly ensconced in the right back position, there’s no place for him at Arsenal, and he’ll be sold for as much of the £12m fee we can recoup. If we get half that we’ll be doing very well.

David Ospina: The Colombian has done well, and it’s clear that Arsene Wenger holds him in very high regard. That said, he’s been the number 1 for his country, and he can’t have been too happy at spending most of this season on the bench. I suspect he’ll want to go this summer. Unless a player is happy at playing second fiddle to the first choice, it’s always going to be difficult to keep him, and I think that’s the issue with Ospina. He’ll want to play and in order to do that, he’ll have to go elsewhere.

Kieran Gibbs: The England international is very much at a crossroads in his career. He’s behind Nacho Monreal in the pecking order, rumours of a new left back have been circulating for months now, and like Ospina if he wants to play regularly he’s probably going to have to look elsewhere.

Yaya Sanogo: One of Arsene Wenger’s strange little punts (careful now) that might go one way or the other, but more often than not go the way we expect. Not part of this season’s first team squad, so very much on the periphery, and it’s almost impossible to see any kind of future for him. Especially when the need for upgrades in the forward line should play such a major part of our summer business.

Theo Walcott: At 27 and with 3 years left on a contract, the conditions for a sale are perfect. A player who has flashes of excellence, often displayed at the most confusing times (when he’s having a quiet game), but he just hasn’t developed the way Arsene Wenger would have wanted. The manager is now reluctant to use him on the wings unless he has to, and his inability to find any consistency up front means he’s not a convincing option there. The £140,000 a week wages may make life more difficult, but hardly impossible in a Premier League awash with television money.

Olivier Giroud: Again a player I think gets far more stick than he deserves, from people who want him to be something he’s not. What he is is a perfectly fine 20 goal a season striker, and we all know what he’s not. Could easily stay as back-up if he’d be fine with that, and I think he’d be really good option to add depth to the squad, but I suspect he’d want to play regularly and if the right offer came in we’d certainly listen. Especially if there’s a striker signing lined-up, which there really should be.

Alex Oxlade-Chamberlain: There are lots of rumours about his future, and this season has been something of a disaster for him. Given plenty of chances by the manager, including being put into the team ahead of Joel Campbell when the Costa Rican was playing well, he’s failed to take them, and the litany of injuries (an issue that can’t be ignored either) have been hugely disruptive. This was a season in which he was supposed to take a step forward, instead he’s gone backwards.

Joel Campbell: It’s hard to escape the feeling that Arsene Wenger just isn’t convinced by the 23 year old. One of the bright spots this season in terms of his contribution and how hard he’s worked, yet the manager has no compunction in making him the sacrificial lamb when he deigns to more ‘established’ players. In recent weeks, he’s lost out to the emergence of Alex Iwobi. As such, if he’s viewed as dispensable by the manager, then a sale is hardly out of the question.

Per Mertesacker: He’s been dropped in recent weeks as Arsene Wenger reshuffled his centre-halves. People talk about pace as if it’s the only thing a central defender needs, but the fact Leicester are top of the table with Robert ‘The Glacier’ Huth and Wes ‘The Sloth’ Morgan shows that to be a lie. I’d keep his experience and intelligence, especially as Gabriel remains hugely unconvincing, but as a squad member as we bring in another central defender this summer. There’s always plenty of football to go around, and having some genuine experience in the dressing room is important.

I didn’t even mention Wojciech Szczesny for whom the Arsenal door is not closed, I’m told. The Roma loan was primarily brought about by his own behaviour but also because the club wanted to see if it might bring about a change, a more mature goalkeeper. He’s done well at Roma, but the big question is whether he’d return to understudy Cech, and if at this point the manager’s view on him has changed.

Emi Martinez is out on loan and could fill that role, so it’ll be interesting to see what happens come the summer.

Right, plenty to discuss in the arses, I’m sure, so have at it. A reminder now that yesterday’s Arsecast Extra looks back at West Ham, our defending, the goalkeeping issue and lots more. We also come up with a statistical model #ExpFU which can apply to Arsenal, and we answer lots of listener questions.

You can download and stream directly on site here, listen via Acast, or subscribe and everything else in iTunes. Have at it.