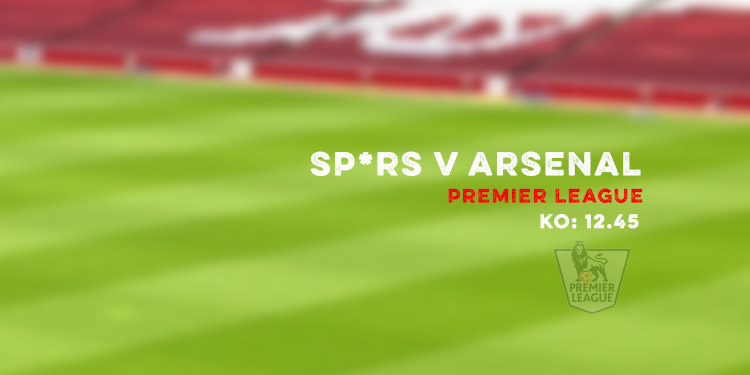 It’s hard to know what to think about today’s game. On the back of a dreadful week, with what little confidence we had even lower, admissions from one of our best players that we lack of the hunger and belief to be champions, and general frustration approaching all-time-high levels (at least in the Wenger era), the last place you really want to be going is White Hart Lane.

On other hand, maybe it’s exactly the place you want to go. Arrive there as underdogs, with some familiar noises about power-shifts echoing around, it could be just the thing we need to spark ourselves back into life.

Back on the first hand though, we’ve lost our last three, we’re defending poorly, not scoring enough goals, and Sp*rs have been a very difficult side to beat this season. Although they lost to West Ham in midweek – perhaps the first sign of the pressure causing them to crack a little? – their form has been more solid than ours, even if there is just 3 points between us in the league.

Going back to the other hand, form goes out the window in the derby. People long for days of yore when Patrick Vieira, Robert Pires, Thierry Henry, Freddie Ljungberg and Dennis Bergkamp majestically took to the turf at their place; yet lost in that daydream of having players that good (and successful) once more, is the fact that even if we faced the likes of Mauricio Tarrico, Chris Armstrong, Noureddine Naybet and that German midfielder who looked a Labrador puppy whose face had been squeezed through a cone, they were always really tight games.

In summary, I have no idea how this is going to go. It’s hard not to be somewhat apprehensive after what we’ve seen in the last week, but then I think that this is Arsenal, and these are players who have won stuff for us, who know fine well how much this game means and will be well and truly UP FOR IT. I hope. Maybe. Oh please, just be up for it. And smash them to bits, that’s all we ask. It’s not much. After the week we’ve had don’t you think you owe us that?

Stick up Paul Scholes’ article on the dressing room wall saying Arsenal don’t have the balls to win today. That someone who looks more and more like a shrivelled testicle every day feels it appropriate to make that kind of statement in public about you, should really hurt you as a group of players. Of course that won’t be the main motivation. There are other things, like the title, like winning a derby, professional and personal pride to put things right, and the fact that we’re playing them, but every little helps as they say.

What of the team? With Laurent Koscielny out it’s Mertesacker and Gabriel in the middle. The full backs pick themselves. In goal David Ospina will replace the injured Petr Cech who is going to miss 3-4 weeks with a calf injury. All we can do is hope that those are weeks on the Gregorian, rather than Wilsherian Calendar. Obviously people would rather have Cech, I know I would, but Ospina had a decent enough run in the side last season, he’s an experienced international and isn’t a bad back-up at all. The worry I would have is that he could be a bit rusty, which adds some onus on his defenders to, you know, defend – an addition to their games today that would be most welcome indeed.

In midfield, I think I’d be tempted to fiddle around a little bit. Is a North London derby the right time to give Mohamed Elneny his first start in the Premier League? I don’t know, but I suspect you could make the point that sticking with Ramsey–Coquelin duo would be just as much of a gamble against a team as dynamic as Sp*rs. That could mean using Joel Campbell on the right again, or even shifting Ramsey out there to try and add a bit more balance to an area of the team that really isn’t working right now.

We have to stick with Alexis. You don’t go into a derby without him, simple as that. Wednesday wasn’t great but there were signs that he’s close to making the little breakthrough that would probably spark him back into life. Hitting the woodwork twice, getting in some good positions himself, providing an assist, and some flashes of creative play hinted that there’s something happening again, so he has to start.

Up front though, I’d pick Danny Welbeck. Olivier Giroud had a chance to break his goalscoring drought against Swansea in midweek and failed to take it. He’s a good option from the bench, and I think Welbeck’s pace and power up there might cause them more problems. At the very least we have a player who is fresh, who has scored twice recently, and wants an opportunity to stake his claim at centre-forward, so I’d give him that today.

[I’m also just inserting ‘something cutting and mean’ about Theo Walcott here so I can a) be proved right or b) eat a load of humble pie from Theopheliacs when he comes on and scores. I should point out that I absolutely love humble pie, it’s so delicious, especially if served up on a plate at White Hart Lane].

The derby is always a massive game. This one, due to the unusual circumstance of them being ahead of us that high up the table, perhaps even more so. Add our shitstorm-form and general unease, and there’s a good case for wearing brown trousers today.

As I said above, I just don’t know. All I do know is that I want to see something approaching the real Arsenal today. Not this beaten-down, pale-imitation we’ve had in recent weeks and months. Sometimes it takes something to turn all that around, and today could be that day.

If you need some pre-game listening, check out this week’s Arsecast available on site here, or subscribe via Acast, or iTunes. Kick off is 12.45. Join us for the live blog and all the post-game stuff on Arseblog News.

If you feel like a bet, Betfair are offering Arsenal at 9/1 – £10 max bet with money back if you lose. Click here to sign up and use code ZFBC66 to get the offer.

Mr Form, may I please introduce you to my good friend, Mr Window?

Laying down the law