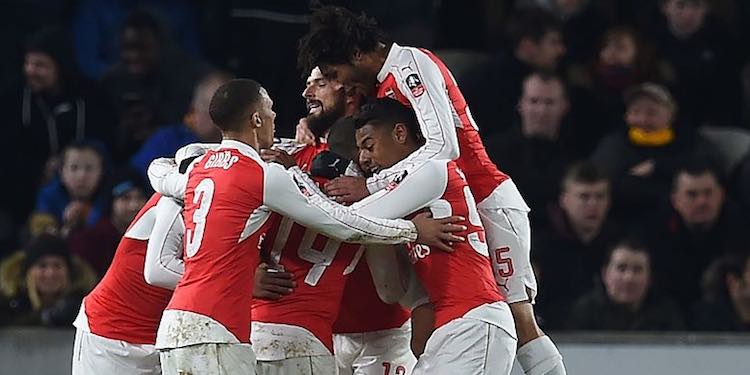 What is this strange feeling? I don’t quite know how to process what it is. It’s like NOT frustration and resignation. It’s sort of like the opposite of when we don’t win, or something.

I think I know what it is. I’m remembering. We … didn’t … lose. Sweet Jumping Jesus on a souped-up tricycle … WE WON! And scored goals, and didn’t let any in. It’s like a Christmas miracle in March. Even the fact that we lost three players to injury doesn’t dampen my delight. Much.

In seriousness though, we won and it’s nice. Overdue, but nice. A long time coming, but still nice. Belated, but, you know, nice. It’s been a while. That 2-1 win over Leicester on Valentine’s Day may have stolen our hearts, but it seem like Cupid’s arrow caught us right in the goolies and we’ve been playing like a team with an infected ballbag ever since. It was good finally throw that off a little.

Ok, it wasn’t the best game of football you’ll ever see. The first half was pretty dismal. The highlights were Per Mertesacker cracking his noggin off some Hull chap and though he carried on for a while the lump on his eye meant he had to be withdrawn for Nacho Monreal who went in at centre-half. David Ospina made a great save from some bloke – and it is just me or does he look smaller each time you see him? Like an elderly aunt you see once a year, each time it’s like ‘Woah, you’re so tiny!’

Still, credit to him it was a cracking save and I don’t really like to think what it would have been like if we’d gone behind. Theo Walcott took the two worst corners you’ll ever see within 30 seconds of each other, Gibbs hit the bar with a corking shot, and just before the break some Hull fella made a daft back pass, allowing Olivier Giroud to finish from close range. He and his wife just got a new puppy, so they made the classic Bebeto ‘I just got a new puppy’ celebration.

In the second half, it was more of the same really. We lost Gabriel to some kind of injury, so we threw on Aaron Ramsey, a player with a history of hamstring and thigh injuries, without any real warm up. I do wonder what you’re supposed to do there though. You have to make a change. You can’t really play with 10 men as the substitute does star-jumps and shuttle runs up and down the line. Maybe you have to keep your subs in a state of perpetual warm-up or something.

Anyway, the point is that just after we scored our second goal, Ramsey went off injured with a thigh injury. His was described by the manager as the most serious of the three and he was replaced by The Jeff. The goal was nice though. A Walcott cross from the left didn’t go out for a throw on the other side, but instead deflected off the head of a defender into the path of Giroud who readjusted nicely to score his second right-footed goal of the night.

Then Walcott, who I might diplomatically say had been quiet all night, (or less diplomatically here), burst into … life … or not death anyway … with a two-goal salvo that made an already safe game super-duper safe. The first came from an absolutely superb pass from Joel Campbell who basically put it on a plate for him, the finish from close range was fine. And the second from an Iwobi pass, after which Walcott cracked a low shot in at the near post with the help of a deflection from the defender.

The last time we scored four goals was when we scored five against Leicester (oh hi Michael Owen!), so that’s a very welcome development. I am taking into account the quality of the opposition but it’s still a good thing for a team that has been really struggling for goals lately. There were some good performances too.

Campbell and Iwobi stood out for me, hard-working and always trying to make something happen, while Mohamed Elneny looked decent again in midfield – which is probably a good thing now that Ramsey has probably already been wrapped in a shroud and buried at sea. He is with the sharks now #rip in peace.

We had a great game on Saturday and I was quite amazed by the response we got from that game. Overall, I believe that we do not always need confidence, you can play well when your confidence is not at the highest. Our job is to play and I believe that we have a great spirit in the team and we have shown that again tonight.

No, I don’t really know what that means either, and he spoke about his goalscorers, both of whom have been going through relatively unconvincing periods:

Giroud had gone a while without a goal and that will help him tonight. He got a new puppy last night and that will certainly give him euphoria. Walcott scored which is good as well.

I like how the Walcott comment is almost like an afterthought, but it won’t do us any harm to have players confidence boosted by the goals they got. The injuries are a worry of course. We could really do without those as we’re light enough at the back and midfield hasn’t been 100% convincing, but perhaps we might stumble across something that works. Coqeneny in the middle and Campbell on the right, perhaps, we’ll see what happens, I guess.

It means that we now know what we’re doing this weekend. An FA Cup quarter-final against Watford on Sunday ahead of that trip to Barcelona in the Champions League. It eats into our rest time a bit but I’m not sure playing a few hours closer to that game is what’s really going to make the difference on the night.

Anyway, it’s good to win again. After so many games trying to deal with and process disappointments, it makes life just that bit easier this morning. So, if you’re listening Arsenal, just do this again in every game between now and the end of the season, and we’ll all be a lot happier.