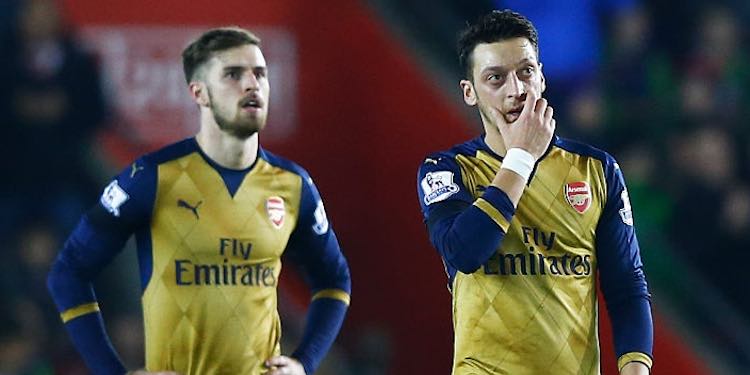 I said in yesterday’s blog that I was a bit worried about last night’s game so I can’t pretend that the loss is a massive shock, but the manner of it is something else entirely. We may have some legitimate gripes about refereeing decisions, but you can never control those – what you can control is how you play, and we performed like a team that had enjoyed Christmas Day rather too much, ending up hungover and off the pace.

It was the same starting XI that beat Man City so well on Monday night, so the fluctuation in performance demands some perspective. We weren’t the best in the world simply because we beat City, nor are we the worst because we lost to Southampton, but again the scale of the defeat and the way we ended up shipping four goals against a team that hadn’t won in their last six games raises serious questions.

While I’ve seen some suggest there’s there’s little you can about their opener – a truly stunning finish, no doubt about it – you have to look at how easily we allowed the cross. Standing off the man completely with no pressure, he was given all the time he needed to swing the ball in. Mertesacker’s clearance wasn’t great, and there’s no question that’s the best goal that bloke will ever score in his life, but when you don’t work hard enough you open yourself up to punishment, and that’s what happened.

We never got going as an attacking force. Southampton worked very hard to nullify the threat of Mesut Ozil, Giroud got no service, Campbell and Walcott out wide found it hard to contribute in any meaningful way, and the England man was somewhat culpable for their second. He cut inside, a rare show of attacking ambition from any Arsenal player on the night, but then carelessly clumped a mis-kicked pass to nobody in midfield, allowing Southampton to pick the ball up and drive forward.

From there it’s hard not be frustrated that Long’s obvious trip on Koscielny wasn’t noticed, leaving him with a tap-in at the back post. He’s that kind of player though, and on a night when players were slipping all over the place he took a chance and got away with it. It’s basically the forward equivalent of a centre-half leaving a little on in a challenge, and he’d been on the receiving end of a couple from Koscielny during the game so he gave a bit back and got his reward. Annoying as it is, we’d be all over it if an Arsenal player had done the same.

So, while it was a definite foul you have to ask why on earth our two central defenders were left so exposed.

Ramsey was closing down the man in midfield, Flamini and Monreal allowed Mané way too much space down the left hand side, and as great as the Spaniard has been this season he was guilty of ball-watching there – maybe there was an element of fatigue there. The cross rather fortunately went through Mertesacker’s legs and the trip allowed Long the easiest of finishes with no Arsenal player anywhere near him.

For the third the corner wasn’t a corner, but decisions like that happen all the time, it’s up to the team to deal with them. The fashionable thing to do is bemoan zonal marking when it doesn’t work, as if man to man is some kind of flawless alternative, but in both cases it requires the players to do their job and Alex Oxlade-Chamberlain didn’t do his.

The height difference between himself and Fonte isn’t the issue, it’s that he allowed the Southampton defender to just run past him and head home from close range. It’s not the first time this season that his lack of defensive awareness has proved costly, and you could also ask if Cech might have been a little more decisive when you look at how close to goal Fonte was when he headed home.

That was certainly that, game done and dusted, although it got worse when Long fired home in injury time to rub some salt into the wounds. He got between Koscielny and Monreal, the pass found him perfectly and it was the plop flavoured icing on the Arsenal cake last night. 4-0 to a Southampton side that had been struggling badly, certainly not the way we wanted the first of our festive fixtures to go.

And on what’s next, considering we play Bournemouth at 5.30 tomorrow:

We were disappointed and frustrated and the only way is to respond in 48 hours.

Overall, a miserable, frustrating evening. So very, very Arsenal. From the almost sublime to the totally ridiculous. I did laugh when Steve McManaman said on BT that ‘Everyone apart from Arsenal fans knows they’re capable of performances like this’, as if we all thought we’d cruise through this one without any problems at all. Arsenal fans know better than anyone that this always in our locker, and it’s hard not to worry that this might well affect confidence and belief, not to mention the physical aspect of it.

Maybe there was an element of tiredness catching up with us last night – the small squad unable to maintain the level they had until now. The concern is that when you’re winning and you have some momentum, you don’t notice the physical deficiencies as much; as soon as you lose every ache, strain and tired muscle is amplified.

On top of that, when you wonder how we might spark a bit of life back into us for tomorrow’s game, there’s very little he can do in terms of rotating his team. The midfield duo of Flamini and Ramsey are basically the only two we have available. There’s no other striker than Giroud, no other playmaker than Ozil. Mathieu Debuchy hasn’t been on the bench for the last two games and I suspect that’s because of behind the scenes stuff – whether it’s contentious or not it’s impossible to say – but you’d imagine that would more or less rule him out of action.

Add Gibbs and Gabriel, perhaps. An unconvincing Oxlade-Chamberlain is a risk as last night showed, Iwobi and The Jeff are surely not ready to start in the Premier League, so this is going to be a real test, physically and mentally, for the team and the manager to get a reaction.

Yet, if we win we go top of the table. Of course there are short-comings that simply have to be addressed in the month of January with the chequebook, I don’t think there’s any question about that, but it feels a bit as if we lurch from one moment of hyperbole to another this season. We’re not as good as some people say when we win, we’re not as bad as some say when we lose. All in all, in terms of the table anyway, this is a decent position to be in at this time of the year, and we have the opportunity to bolster the squad in a few days time.

How often have we heard that this is the season in which anyone can drop points to anyone? We’re not immune from that either, but it’s massively important now to respond against Bournemouth, then take stock of what we need to do.

Last night was a chance to go top of the table, but it wasn’t our last chance – despite the way BT kept presenting it. There’s a lot of life left in this season, and while last night’s scoreline and performance was a dismal embarrassment, it’s not a fatal blow to our title challenge.

Tomorrow takes on even more significance though, let’s see what we’re made of. Until then.