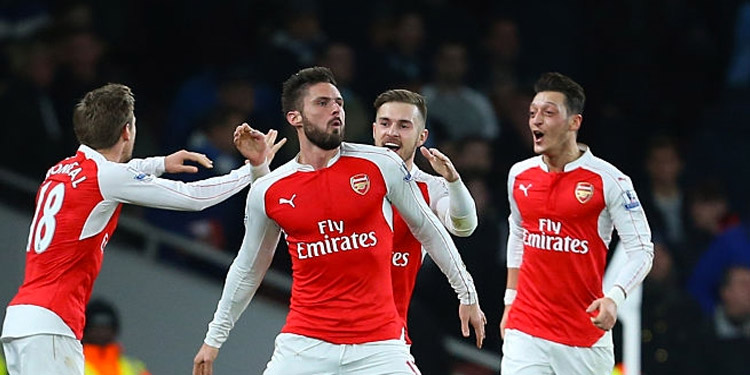 That was a most enjoyable, thoroughly deserved win last night, and in typical Arsenal style we ensured the final whistle was even more joyous than it would have been by letting one in late in the game and making everyone brown their pants a little. It’s no good for our hearts, but happiness is always that little bit happier when it’s served with a side of relief.

When you consider this was a win achieved without Alexis Sanchez, Santi Cazorla, Francis Coquelin, Danny Welbeck, Jack Wilshere and others who might well have played a part, it speaks to a genuine depth to our squad, but also a fantastic solidarity and work ethic.

When you see Theo Walcott, not renowned for his defensive diligence in fairness to him, dig in, win tackles (3/5), and put himself about the way he did you know there’s something going on with this team. To be fair, that effort was present throughout the side, no Arsenal player was found wanting, and when you’ve got a player like Mesut Ozil pulling the creative strings you’ve always got a chance.

Football is a game of fine margins though. Moments before we went ahead we could have been behind. Laurent Koscielny stepped up to try and intercept near halfway, which left all the room in the world for Kevin de Bruyne to run into when Aguero flicked the ball beyond the Arsenal defender. He had David Silva in support but Per Mertesacker did enough to create some doubt in the City man’s mind, and he opted for a shot which fizzed just wide of Petr Cech’s far post.

They should have scored, and came to rue that miss when a minute later we went ahead. I’m pretty sure Ozil’s pass was meant for Nacho Monreal but Walcott took the ball inside the City area, stepped out of it, and then curled a beauty over the German’s head and past the flailing arms of Joe Dandruff. Even if it was somewhat against the run of play, it was a brilliantly executed finish from Walcott.

That seemed to spark us into life and there were more dangerous moments before the break, when it looked like we’d take that single goal lead in with us. Instead it was doubled when Mangala’s wayward pass came to Walcott rather than a City teammate. He fed Ozil who had space to turn, and although Giroud is a player often criticised for not having much pace, his movement was such that Otamendi couldn’t get close enough too him, and there were flakes of dismay falling from Hart’s head when the finish whipped between his legs.

It prompted a half-time change with Raheem Sterling coming on for Fabian Delph but the former Liverpool man had little impact in general – his most memorable moments were a dive over Mertesacker and being robbed in the tackle by Walcott deep in our half. You just got crunched by Theo Walcott mate.

It looked as if we were going to see the game out comfortably, and indeed we should have put the game out of sight, Joel Campbell spurning a great opportunity to make it 3-0 when he ballooned over the bar from a Monreal cross. A slight blot on his copybook, but overall he put in such a shift last night that you can forgive him that when we’ve come away with all three points.

As ever though, we put ourselves through the mill a bit late on when Yaya Toure switched modes from Indolent to Excellent, and got one back for City. You can look at how we allowed him to have that chance, and we could certainly have defended it better, but the finish was absolutely sublime. I say that, of course, with the benefit of us having the three points and it being simply a consolation goal for them.

Toure could, and probably should, have equalised, missing from close range after deciding that running around was actually quite productive, but I have to say I enjoyed the final few minutes of injury time when we forced throw after throw down their right hand side. It’s so incredibly frustrating when other teams do that to us when we’re desperate for a goal, so when the shoe is on the other foot I’m all for it.

Afterwards, Arsene Wenger praised the spirit and character of his team, saying:

I believe it was a very intense game going from one side to the other at a very high pace. Both teams gave everything and on our side I believe that we’ve shown spirit, organisation, brilliance and all together they gave us the three points.

And on what it means for Arsenal’s title challenge:

It is too early to say to we can win the league but it strengthens our belief. You come out and realise you have earned your right to win these games and for us it is important. We have to be ready to fight like that in every single game and you do that quite [often]. It is quite interesting on my side there is real life in the team, real togetherness and real solidarity, so let’s take care of that.

It’s often been the complaint that we don’t win the big games, and that’s something that’s changed over the last 12-18 months. Giroud doesn’t score against the big teams, now he does. And as I mentioned at the start this was a win against one of the best teams in the league without quite a number of our best players. The manager is right to praise the collective, and this was a brilliant team effort, because when players like Walcott and Campbell really dig in the way they did it helps offset what we’re missing.

At the back I thought Per Mertesacker was gigantic, in a football sense as well as a Big Friendly one, and I guess he might not have stood out for many but I thought the sheer presence of Petr Cech added something to us throughout the 90 minutes. It just feels so much safer with him in there.

As for the win itself, you can’t do anything but take the positives from it. Before the game people said this was the real measure of us in terms of this season’s title, and I think we’ve answered the questions that were asked of us. I think it’s there for us if we really want it, but that isn’t just down to what the players do on the pitch. At the moment you can’t ask any more of them. There’s no chance to rotate or rest, and those who are fit are having to shoulder a heavy burden right now.

The news that Alexis has suffered a little setback to his hamstring injury and won’t be back until around mid-January only adds to that burden, so it’s incumbent on the manager and those around him to ensure that whatever business we’re planning on doing in January is done as quickly as possible. There’s only so long you can ask these guys to play without consequences, so fingers crossed when the window opens we can add some more quality and depth to the squad.

If we can do that well, I think we have a fantastic chance to win the league this season. We’ve worked hard to get ourselves into this position, now let’s really go for it. We might not be top, but we’ve shown enough so far to suggest that this could be our season, and we’re in a very nice position for Christmas.

James and I will be here with an Arsecast Extra for you later on. As ever if you have questions or topics for discussion, please send to @gunnerblog and @arseblog with the hashtag #arsecastextra. Should be available before lunch.

Until then, sit back and bask in the warm Ozilian glow of last night.