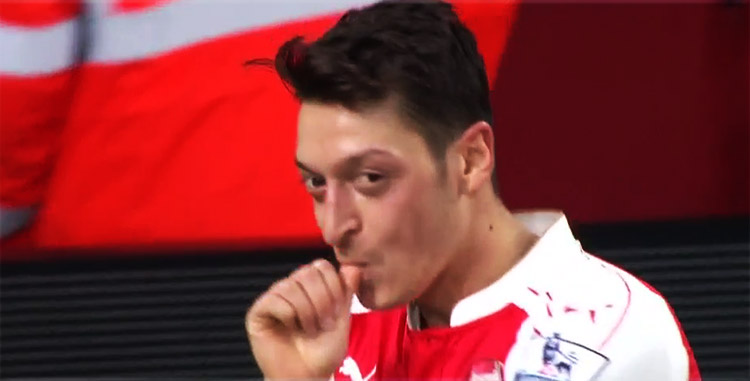 “By the seventh day God had finished the work he had been doing; so on the seventh day he rested from all his work. Then he said ‘Feck this’, and made Mesut Ozil” – Genesis 2.3*

It’s impossible to look back at last night’s game and not start with the performance of Mesut Ozil. We know he’s been in outstanding form this season, but playing his second game inside 48 hours, he showed no signs of fatigue or tiredness, and put together a masterclass of passing and creativity.

Nine chances created for Mesut Ozil today – the most by a player in a single game in the Premier League this season.

I think the tackles thing is important, because afterwards Arsene Wenger said, “What’s important is that Ozil convinces everybody that he is not only a talented player but one who is ready to work for the team.”

He didn’t just fanny about up front waiting for those around him to squander the chances he put on a plate for them, it was a truly all-round performance from a player who is just an absolute joy to watch. I say this without meaning to be critical of anyone else, but if we had forwards who could convert 10% more of what he creates for us, we’d be running away with this league right now.

Giroud missed a good chance (late in the game, tired legs, I know), while Walcott had one of those nights where his first touch was a touch on the clumsy side, but watching the German fashion chance after chance it felt a bit like throwing away perfectly good food in front of an audience of starving orphans.

He made Arsenal’s opener from a corner, curling the ball into a dangerous area, but credit too to Gabriel whose run and determination saw him thump a header into the top corner. The Brazilian had a fantastic performance last night at both ends of the pitch. He was dangerous from set-pieces, also hitting the post before Mertesacker’s comedy header wide, but at the back he really had a fine game too.

Not only did he pass it well, he read the game beautifully, making 6 interceptions, zipping in to cut out passes that might have brought danger. Defensively his game was topped off by that fantastic burst back into our area to cut out a cross after Bournemouth had failed to be given offside early in the second half. An impressive performance after some weeks on the bench, and it’s good to have that bit of security in terms of depth when we need it.

Back to Ozil though, look at the areas he made those chances in:

We really ought to have scored more goals from what he gave us last night, so it was fitting that he took matters into his own hands and got our second. Picking the ball up deep he fed Ramsey on the right, took it back, played it with the outside of his foot to Giroud and kept running into the box.

While all the focus this morning is rightly on Ozil, it would be remiss not to touch on the quality of the first time pass from the Frenchman. It’s not the first time one of his perfectly weighted flicks has created a goal, and the ball sat up perfectly for Ozil to take two further touches. The first – a lesson to those around him – got the ball under control, exactly where he needed it to be. The second, the most collected of finishes between the goalkeeper’s legs, stroking it home like a great artist applying the final touches to his canvas.

No less than he deserved, and the quality of the goal matched that of his performance overall. It also gave us the safety net we needed and there was really very little sense that Bournemouth might get back into it, despite the fact they did play quite well and had plenty of the ball. Defensively we were sound, and ultimately the clean sheet brought about a Premier League record for Petr Cech.

His 170th clean sheet put him ahead of David James, and that’s a fantastic achievement for him, but it’s worth highlighting that this is a *Premier League* record only. Amazingly enough there was football before The Greatest League That Ever Lived, despite what the TV companies would have you believe. Still, well done to our keeper, and let’s hope he can add plenty more to that tally before the season ends.

It was nervy at the start because we had to swallow the 4-0, and I think we were focused at the start not to concede a stupid goal and got slowly into the game. It took us a while to get going but I think in the last 70 minutes we were in control of the game and did very well.

And on the man of the night, Mesut Ozil, there were questions if he’s comparable with the great Dennis Bergkamp:

Something that I enjoy very much is the timing of his passes. It is never surprising. If you think in the stand he should give the ball now – it is now. By the time you have finished your thinking the ball has gone already. He is somebody whose song is always the right tone and that is something that is very difficult to achieve in the game because on the pitch the decisions you have to make are so quick and to get that always right is not easy.

I suppose we could wax lyrical about him all day long, such was the quality of what he did last night, but maybe the best thing to do is head to the video page and check out some of the clips to just enjoy them again. Footballers like this don’t come along very often, and when they do it’s worth stepping back from time to time just to appreciate what you have.

A word too this morning for Calum Chambers who got only his second start in midfield as Mathieu Flamini wasn’t risked with a slight ankle injury. Obviously it’s too early to make any definitive judgements on him as a midfielder, and there are certain things he clearly needs to work on in there, but he acquitted himself well last night, was tidy on the ball, and didn’t look out of place at all. It’s a performance that will do him good.

So, a nice way to bounce back from the defeat to Southampton and right now we sit top of the table. That could change later when Leicester and Man City meet, but it’s still a nice place to be going into the turn of the year.

James and I will be here later with an Arsecast Extra for you. If you have any questions or topics for discussion, please send to @gunnerblog and @arseblog using the hashtag #arsecastextra. We’ll have that available for you before lunchtime.