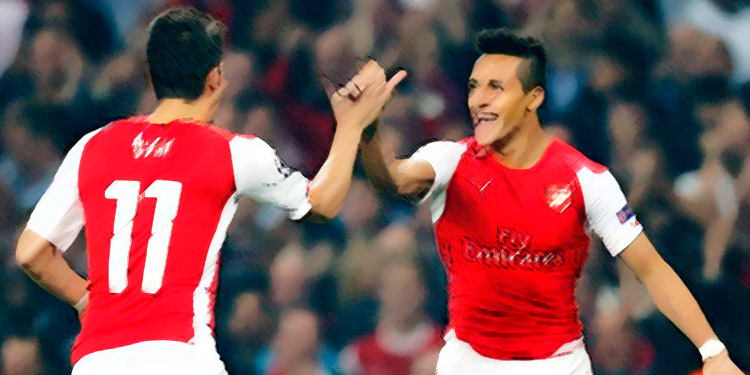 Morning all. The Premier League threw up no real surprises this weekend, all the teams you’d expect to win did just that, while Jamie Vardy continued his amazing goalscoring run with two for Leicester as they staged another superb comeback.

I do love his story – in 2012 he was playing for Fleetwood Town in the Conference, so far he’s the leading scorer in the Premier League this season. His goals against Southampton were both fantastic, one a bullet header, the other an emphatic blaster of a finish after he went clean through on goal. He plays like a guy making up for lost time, perhaps a bit like the football equivalent of snooker great Alex Higgins (without the other baggage, hopefully).

As football itself becomes more and more predictable; as the unraveling of the powers-that-be who have profited from the game at the expense of the game; a story like Vardy’s is great. Except when he plays against us.

It was also a decent-ish weekend for Carl Jenkinson who scored for the second weekend running for West Ham – although he did give away a penalty too. I liked the interview on Match of the Day though when he admitted it was unusual for him to get ‘2 in 2’. He continued by saying, ‘It’d be nice to get 3 in 3, 4 in 4 …’ then it cut off, but I couldn’t help imagining him continuing to about 23 with the interviewer growing increasingly awkward because he just won’t stop.

The Arsenal focus now turns to Europe with a game against Bayern Munich, a team in reasonable form you might say – just the 12 wins from the last 12 games, like. Arsene Wenger says the win against Watford was just what was required:

For us it is a perfect run in the Premier League, and on the other hand also perfect preparation for the Bayern game because we had no injuries and we got the three points. We are now in a position where we can really focus and give everything on Tuesday night.

And that his team is going to attack:

I will have to see how we prepare for this game now and decide what we really want to do. The confidence level is there, the required result is there as well – we know exactly what is needed; a 0-0 is not even a good result. To score goals, we have to attack.

We really don’t have any other option than to give it a go, but I do wonder if we’re going to give it a go with our absolute best XI, or if there might be one or two changes required so soon after the trip to Watford. The manager is certainly thinking about it:

I could rest a little bit Ozil and Sanchez and we have of course to put pace into this game and play against a big team, but we know we have proved ourselves in the Champions League. We want to make something special against Bayern Munich as it is the only way we can keep in the race.

Now, I fully accept he knows the physical condition of both players better than I do, and if there’s any danger of them missing Premier League games if they play tomorrow night, then I understand the decision to rest them. As it stands the domestic league a competition in which we’re well placed and currently stand a chance of winning – the Champions League, sadly, is not.

Yet to make something special you need your special players, and Ozil and Alexis are the guys who can make special things happen for us. We know all about the Chilean’s ability to get goals, while being without Ozil’s vision and craft would make us much more prosaic as a team. It’s a tricky one though – pragmatism vs idealism suggests the common sense approach should win out, but then football would be very boring if it was always thus.

Perhaps changes might come elsewhere. For example, does a quiet Theo Walcott performance against Watford, and a goal from Olivier Giroud, change the thinking about who starts up front? Gabriel back into the back four – after the manager revealed he should be ok?

Does the fact that we had Matt Macey on the bench on Saturday perhaps suggest David Ospina has a problem? Regardless of that, it’s a game in which Petr Cech has to start, simply because he’s our best goalkeeper and this is a game we have to win if we want to stand any chance of qualifying from this group. I think it’s a tall order, and it won’t be what happens tomorrow that is the deciding factor really, it’s the previous two games that will have done the most damage to our European campaign.

Still, it’s Bayern Munich at home in the Champions League. You have to go give a go. The players will certainly want to do just that. Testing yourself against the best opposition is a big motivation, and if there was a response against Manchester United to the Olmypiacos defeat, perhaps we can show something similar tomorrow night. Anyway, more on that game tomorrow after we hear from the manager today at his press conference, and get a little more insight into his thinking.

As ever James and I will have an Arsecast Extra for you this morning. If you have any questions or points of discussion, send them to @gunnerblog and @arseblog on Twitter with the hashtag #arsecastextra and we’ll get to as many of them as we can.

Podcast will be available for you before lunch, all the news of the day etc over on Arseblog News, for now have a good one.