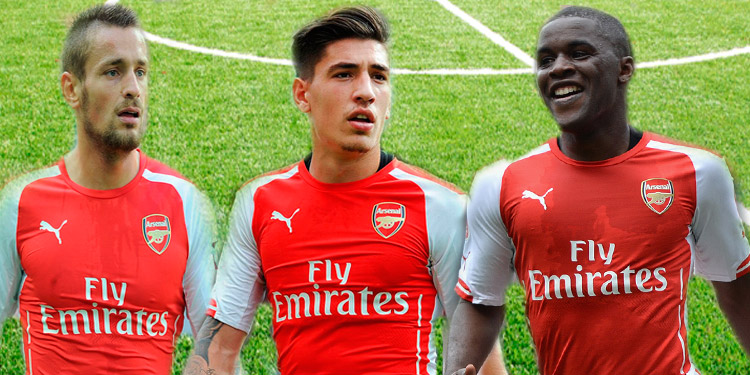 The early news regarding Theo Walcott and and Alex Oxlade-Chamberlain is that we’re going to be without both of them for three games – Swansea, Bayern Munich, and Sp*rs. That’s assuming the early info that leaked yesterday is accurate. It could be less, it might even be more, but obviously we’ll wait to hear from the manager later on when there’s bound to be an update.

I’ve heard questions raised about our squad depth as it now looks as if every single player we have for that right hand side is injured. Like most of you I would have liked us to sign another player or two during the transfer window, but I don’t think anyone can genuinely say that we looked short on the right.

However of how you view the suitability of some, the genuine options we have to play in that position are:

The question isn’t one of depth really. You can’t have 8 or 10 players for one position just in case 6 of them get crocked. It’s slightly reminiscent of those desperate days when all of our full backs were injured at the same time and people said we should sign Wayne Bridge in January – overlooking the small matter of then actually having to pay Wayne Bridge money then and play him in our team, when the closest he should ever get to our pitch is on a stadium tour from which is he is unceremoniously ejected as soon as someone recognises him.

The question now though is ‘Who the hell do we play on the right hand side?’. Here are the options with pros and cons.

Pros: Is alive and fit. Quite fresh too given that he’s hardly played so far this season. Tries hard.

Cons: Means we then need to fill gap on the left, perhaps moving Kieran Gibbs to the left hand side of the attacking trio where he has played in the past – usually at the end of games when we need to hang onto something. Alexis has played out there before, but I seem to associate it with a run of pretty poor results in the first part of last season. I could be wrong there though, and it’s too early to do that amount of digging.

Pros: Is very fast and likes to play in that part of the pitch anyway. His delivery is good. He can beat full-backs. He creates chances and gets assists. Has excellent hair.

Cons: Means moving our best right back out of position. Options to replace him there are unconvincing. Mathieu Debuchy is struggling for form – although perhaps a run of games, something he’s spoken about needing, will help him to return to a level slightly above ‘Eboue v Wigan’. Calum Chambers also a possible, although having been reamed last season by Jefferson Montero, is likely to find it tough against him then Douglas Costa.

Pros: Clearly has some talent. Would be great for a ‘Help me Obi-Wan Iwobi’ headline if things got really desperate, although Arsene Wenger as a hologram Princess Leia doesn’t really bear thinking about.

Cons: According to the manager he’s not ready for Capital One Cup football. That would seem to rule him out of Premier League games against Swansea and Sp*rs, and a trip to Bayern Munich. Given our spate of injuries though, some of those ‘not ready’ players are going to have to be on stand-by, and we’re going to have work on their readiness.

Pros: His name is Jeff.

Cons: Is at the U17 World Cup in Chile, and tonight plays a quarter-final against Costa Rica. Seems unlikely to be available, and even if he is, the travel, the tournament etc makes it almost an impossibility for him to play.

So, all in all, none of those are particularly convincing for one reason or another. My suspicion is that the manager might well feel the Bellerin-Debuchy option is the one that provides the most security. He won’t be blind to the fact that the French international is playing like a man who has blunderbussed his own feet off, but he might well view his experience as a crucial factor.

He’s 30 years of age, he should understand what it is he needs to do to find some form (beyond playing more regularly), and how he can do that. The extra security added by having the defensive awareness of Bellerin could play a part too, and going forward you’d certainly fancy the young Spaniard to have some success. It would also mean that we keep an attacking option – in Joel Campbell – on the bench.

Regardless of how you view Campbell, or what you think of his ability, if we start him we’d have no attacker on the bench if we need one. It’s why I think someone like Iwobi will probably find himself in the squad too. It’s all a bit of a mess really, and one that will certainly give the manager something to think about ahead of this weekend, but also the two other big fixtures coming up before the Interlull next month.

Anyway, we shall see what way he’s going to deal with this in due course. In the meantime, we need to get to work on those currently waylaid through injury. We have had some success in recent times in getting players back sooner than the initial prognosis suggests, so maybe there’ll be a bit of good news there.

Back tomorrow with an Arsecast and a look ahead to the weekend’s football. Until then.