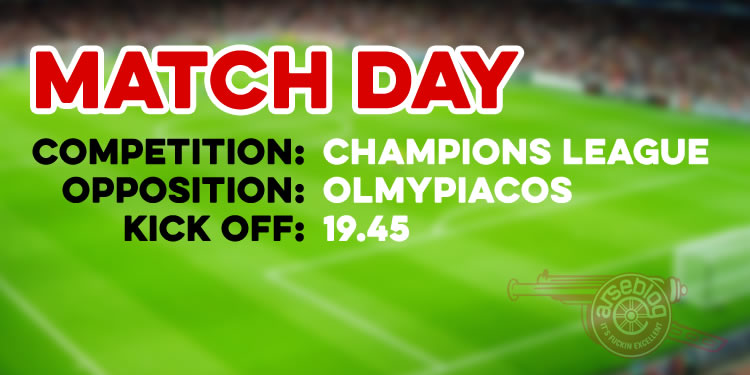 Morning all, Champions League tonight as we look to bounce back from the disappointing opening day defeat to Dinamo Zagreb against Olympiacos.a

The team news is that we’re without Mathieu Flamini and Mikel Arteta, leaving us a little short in central midfield. Aaron Ramsey could move back central but there are concerns about playing his third game in a week, while Francis Coquelin was back in training yesterday but the manager has yet to make a decision about him after the knee problem, saying:

I have to see how Coquelin is. I wait for feedback from the medical people.It’s more the games we played before which could have an influence on selection. Some players have played two tough games, at Tottenham and Leicester, where it was a high level physically.

Up front there’s not a lot we can do really with Olivier Giroud suspended after his red card in Croatia, so Theo Walcott will get another chance up there. We might see Alex Oxlade-Chamberlain come into the team, Joel Campbell should make the bench to provide an attacking option, and beyond that it ought to be tweaks rather than wholesale changes.

However, the line that emerged from yesterday’s press briefing is that David Ospina is set to start over Petr Cech. The manager’s quotes were somewhat vague, but that’s what the Mirror and Telegraph went with and, on the face of it, it seems an strange decision.

I thought the Colombian played well at Sp*rs last week, and there wasn’t much he could do about the goals we conceded against Zagreb really, so it’s not to denigrate him in any way. However, we just paid £11m for one of the most experienced goalkeepers in Europe, I don’t really understand why we would leave him out – especially after he had such a good performance against Leicester.

The only thing that would make any sense to me is that Cech is carrying a knock of some kind which they don’t want to make public and they don’t want to aggravate ahead of Manchester United on Sunday. I don’t know if that’s the case, but it seems the most logical explanation for a decision like this if, indeed, Ospina gets the nod tonight.

There are reasons to rotate outfield players more often. There’s greater physical effort required, you want them fresh for upcoming games, you want to increase competition, but that doesn’t really apply to goalkeepers. We have a definite number 1 keeper, it’s Petr Cech, and given the importance of three points in this game it doesn’t make any sense to ‘rest’ him just to give Ospina minutes.

I can’t imagine this is being done as a favour to Ospina, Wenger doesn’t really work like that, and playing a run of games is as beneficial to a keeper as it is to a striker. To find rhythm, to bring assurance and calm to the back four. So, the only rationale I can come up with is that there’s an injury/ache/strain somewhere, otherwise I just don’t understand it at all.

Anyway, who knows, Cech might start later and this point becomes moot, but I thought the decision to play Ospina in Zagreb was an odd one too. We’ll find out soon enough, and it’s not as if the manager isn’t aware of the importance of this particular game:

You have to win your home games if you want to qualify from the group stage, it is simple as that. We cannot afford to drop points now against anyone at home. We always try to play and go forward. At home we face maybe a different kind of problem, teams regroup in front of their box and you need to be penetrative with your passing, with your movement, and clinical with your finishing.

Tonight’s visitors come into the game top of the Greek Superleague with 5 wins out of 5, so they’ll have plenty of confidence and belief. Watching us against Zagreb will have shown them we’re fallible, so it’s hugely important that we address those issues tonight. Playing with 10 men really didn’t help in terms of our performance overall that night, but in general this season we’ve been creating plenty of chances. Saturday was the first day we finished as many as we should, so hopefully that continues again tonight.

If it does, we should have far too much for them, and it would be good to set ourselves up defensively for what’s about to come on Sunday. The two goals we conceded against Leicester were a bit worrying, so let’s iron out those kinks tonight too.

Anything less than three points tonight is going to make our European task a lot more difficult, so let’s hope the team selection and the performance reflects that.

As always we’ll have live blog coverage of the game for those of you stuck in work, or unable to see it. Up to the second live text commentary which you can follow on your phone, tablet, ‘puter or SmartFridge. Just check back here for a post with all the details, or bookmark our default live blog page and updates will begin as if by magic.

If you haven’t yet heard yesterday’s Arsecast Extra, James and I look back on the win over Leicester, try and figure out why Kieran Gibbs was so grumpy, various kinds of cake and lots more. You can listen here or via the player below:

Some extra reading for you this morning with Tactics Column, looking at how partnerships were the key to the win at the weekend. News throughout the day on Arseblog News, catch you later on for the match.