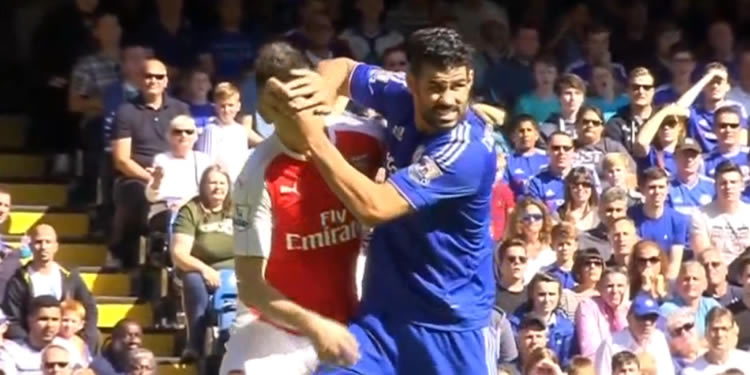 Diego Costa is a cheat. An angry, spiteful, snide, gruesome man who plays like he has a wasp up his arse and the only way to ease the discomfort is to cause pain to others. As early as the third minute he took a dive in midfield, sat on the ground and gestured to Mike Dean that Francis Coquelin should be booked. Given how the day went it’s now surprising that the referee didn’t issue the Frenchman with both a red card and a deportation order.

The incident which led to Gabriel’s sending off was ludicrous on many levels. That he escaped a red card himself for putting his hands in Koscielny’s face, then deliberately swinging an arm back, catching him in the nose is bad enough (it’s also worth pointing out Koscielny’s refusal to rise to the bait). That he also escaped a red card for bumping Koscielny over is another thing.

But in his coming together with Gabriel, who took umbrage at his treatment of a teammate, he led the Brazilian into a trap that wasn’t particularly cunning, but one which was enabled by feeble refereeing and officiating. Not just from Mike Dean but from his assistants too. Are we to believe that the little flick by Gabriel was spotted and deemed worthy of a straight red card while Costa’s attempts to remove Koscielny’s face were missed?

Not simply that, but Dean’s management of the situation itself, allowing the two players to continue bickering ensured what was already a fiery situation would flare up again. The pair had been at it since the Coquelin gesture, no doubt exchanging pleasantries in Portuguese, so as they moved back into midfield, talking all the while, the boot flicked out and so then did the red card for our man after 4th official Costa informed the ref what had happened.

On the one hand, Gabriel fell for the wind-up hook, line and sinker. He should have let it be after the booking, and someone in that Arsenal team should have brought him away from the danger zone. If you look at the video again, Coquelin is coming over to do just that just as the flick happens – while earlier Dean instructed Monreal, who would have acted as translator for Gabriel’s poor English, to go away as he brandished the yellow cards.

On the other hand, it’s impossible not to feel an injustice that in all that happened, Costa escaped with just a yellow and we had to play the rest of the game a man short. When you look at what went down, it’s farcical.

For me this highlights the ludicrousness of football refusal to properly use video technology and officials who can see replays who can report to the referee on the field. From the time Costa knocked Koscielny over and Dean began his ‘management’ of the situation, to the time the red card was issued and play began again, almost 4 minutes went by. Are we still to believe that the use of video on football would disrupt the flow of the game?

It would have been simple for a video official to see what had happened, from various angles, and inform the referee that Diego Costa’s actions were worthy of a red card. There would have no effect whatsoever on the ‘flow’ of the game, because the game was stopped. What we would have had was a correct decision and the instigator and aggressor, the man who caused all the problems, would have been properly punished.

Even in the second half, with Costa on a yellow, a dive in the Arsenal box went unpunished, while there was a flick out at Oxlade-Chamberlain, similar to the offence that will see Gabriel suspended for three games. So as well as being an angry, spiteful cheat, he’s also made of Teflon. How he remained on the pitch while we ended up with two red cards is bananas. Arsene Wenger called it a ‘shame’, it’s more than that. The game was ruined by Costa’s cheating and Mike Dean’s desire to make himself the centre of attention yet again.

I think we’d all accept that Gabriel allowed himself to lose control a bit, but how often do we hear that Arsenal are too soft, or that we’re pushovers? We hear complaints that we don’t stand up for each other. Where is our Martin Keown character? But when we do show some mettle and refuse to back down to obvious provocation, there’s also criticism for being unduly aggressive. You can’t win. In the cold light of day, I’m glad to see him back up Koscielny the way he did. I’m happy that he wanted to get involved and, even if there was a flick of a boot, it wasn’t worthy of a straight red card.

It was a shit decision by a terrible ref, who could have just had a word with him, and told him to calm down. Instead, he ruined what was, up until then, a pretty decent game of football. It had been pretty even overall, Chelsea with a bit more threat – as you would expect at home – but we’d defended pretty well and at 0-0 with 11 v 11 it seemed like a game which could have gone either way, or no way at all.

Perhaps the big frustration from a football point of view this morning is that we conceded from a set-piece. Zouma was allowed a free run to get behind and nod home from close range, and while 10 men affected us in general play, we should be capable of defending from those situations. That frustration was compounded by the award of the free kick in the first place, a generous decision given to a home side already granted a huge advantage by the referee.

On top of that, our big chance to equalise, when the ball fell invitingly for Alexis in their box, was missed and missed badly. It’s difficult now not to be worried about the Chilean’s form. He doesn’t seem to have the same zip as last season and he’s badly in need of a goal. That might be all it takes to get him going, but in comparison with our other forwards who seem to garner much more criticism for their flaws, he’s lagging some way behind so far this season.

The second red card, I don’t think we can really complain as much as the first – both were fairly obvious fouls, but again you come back to the fact that possibly the least dirty player on the pitch, someone who is fouled constantly himself, gets two yellows while Costa manages to stay on. Again, you’d think a bit of common sense might apply, that Dean could look at the situation as a whole and make his decisions accordingly, but then he wouldn’t be able to flourish the red with such drama, would he?

My name is OzyDeandias, Ref of Refs:
Look on my red cards, ye mighty, and despair!

Their second goal is an irrelevance – 9 men were always going to find it difficult against 11 who did everything they could to bore us all into submission. The result was obvious at that point and the only good thing about yesterday was the fact that West Ham beat Man City and didn’t allow them to extend their lead at the top of the table.

Afterwards, Arsene Wenger slammed both Diego Costa and Mike Dean. On the Chelsea man he said:

He can do what he wants, and he stays on. He will do same next week, and week after, and get away with it. In every game there’s aggravation, he gets away with it because referees are weak. We are also guilty because we reacted to it, but every time somebody touches him he goes down like he has been killed.

Bang on really, and I’m glad he said it because it’s true. Costa gets away with stuff that very few others do, so perhaps if this puts pressure on officials to properly deal with his inveterate cheating then the league will be better for it. And on the referee, he said:

I wouldn’t like to be Mike Dean tonight, I can’t understand how he dealt with the situations. I am very disappointed by Mike Dean’s performance.

I wouldn’t like to be Mike Dean any night to be quite honest. It must be a horrible thing to live inside that body and that head, and it’s worth having a read of 7amkickoff’s By the numbers piece on Arseblog News.

Overall it’s hard not to feel a sense of injustice at what happened. I pay no attention to anything Mourinho says after the game, if he really thinks people come to football to see that, then he’s even worse than I thought. And that’s pretty difficult. We might well have played a part in our own downfall, but generally speaking it was the fact Costa was allowed to cheat without due punishment that had the biggest impact on the game.

However, the injustice doesn’t change anything. We lost, and thankfully it wasn’t as bad as it might have been due to West Ham’s win. It’s still two defeats in a week though, and with a North London derby in the Capital One Cup in midweek, we really have to sort ourselves out in quick time. More thoughts on that fixture in the next couple of days, but my opinion this morning is that we put out the strongest team possible because the importance of the game perhaps outweighs that of the tournament itself.

Anyway, that’s to come. Try not to scrape anyone’s face off today, because, you know, if you did that in the street you’d probably go to jail.

For now, have a good Sunday.