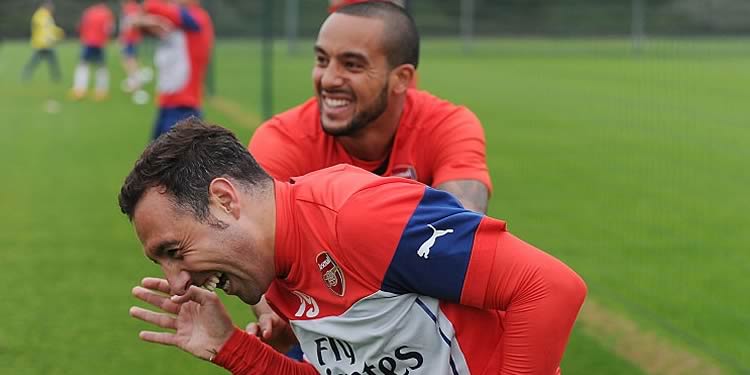 Morning. We’ll start with the news that Theo Walcott and Santi Cazorla have put pen to paper on new deals.

The former signs for four years, the latter for another two, and it’s good news all-round, even though it’s interesting to look at them both and see the differences. Cazorla’s extension secures his future, but is also a reward for what he’s done on the pitch in the last 12 months (and since his arrival from Malaga). You might remember he just signed an extension in March 2014, along with Aaron Ramsey, so this new contract recognises the impact he’s made and the importance he has to this team.

The way he settled into, and flourished, in a relatively unfamiliar midfield role was a big part of why the second half of last season was such a success. It hasn’t stifled his creativity, but it gave the midfield a dimension it didn’t have before, especially when combined with Francis Coquelin’s more defensive outlook.

There had been a sense that he’d move back to Spain at some point, that might still be the case, but by signing a contract extension it’s a commitment from both parties that it’s going to be some way into the future. As I’ve said on here before, watching Cazorla is a joy, and I’m delighted that he’s going to be part of this team for another few seasons.

On the other hand, despite being an established ‘star’, Walcott’s new deal comes about because his previous one was on the point of expiration – or certainly in that period where you risk losing a player for free within 12 months. He signed his last extension in January 2013 and we all know the ins and outs of that, there’s no need to tread over old ground.

In the 12 months between the signing of the new deal and the cruciate injury the following January, he scored 12 goals in total for us. Not a bad return, but after the injury and the manager’s reluctance to use him in the team, his contribution had been minimal until the last two games of the season.

Arsene Wenger left him on the bench week in, week out, choosing Ramsey or Wilshere ahead of him in his best position on the right hand side. When subs were made it was often Danny Welbeck, rather than Walcott, who got the nod. Had Olivier Giroud’s form not tanked the way it did and Welbeck missed out through injury, chances are he wouldn’t have played against West Brom and subsequently Villa in the final.

But how often do we talk about taking your chances when they arrive? He did that with a fine goal in the cup final that set us on our way to a 4-0 win. I really don’t think you can read too much into the West Brom game as evidence of his ability – we know he’s capable of that from time to time, and against a team that were practically on holidays it’s not a performance that made up Arsene Wenger’s mind about his desire to keep him or not.

I think he always wanted him to stay and extend, but I think the difference between him and Cazorla in that Walcott has still got something to prove. His deal was down to timing, as I mentioned, but also about hoping the years between 26 and 30 are his peak ones, and ones in which he can add consistency to his game. Unlike Cazorla it wasn’t based on what he did last season, the final two games were an anomaly, not the norm, whereas the Spaniard was doing it week after week after week.

His fitness has often been an issue, we know that he can often be a passenger as games (literally) pass him by, and his goalscoring record is reasonable but one which could and should improve. I’m not especially concerned about what he’s earning, because every footballer has the right to get the best deal possible for themselves, but like it or not when you’re a £140,000 a week player there comes an expectation of £140,000 a week performances. Not just now and again, but more often than not.

It’s puts him more or less in the same wage bracket as Mesut Ozil and Alexis Sanchez, and that’s the marker these days for the level of performance. Walcott has some fantastic qualities, but the flaws his game are apparent a bit too often. It’s time to iron those out, to stay fit and increase his overall contribution.

I’m also pretty sure that we’ll see some knock-on effects from Walcott’s new deal. Someone like Aaron Ramsey, for example, who has been scoring, playing well, and contributing more to the team over the last 18 months, might feel like he merits a better contract, and on the basis of this you’d be hard pressed to argue against it. That’s the way it goes though, the club will have been aware of that, and will deal with it if and when it becomes an issue.

Overall though, it’s good news for the club as we keep hold of two players who add quality and depth to the squad. I don’t think you can underestimate how important it is not to lose big players but also how it helps when you keep players together. The cohesion, the ‘automatisms’ that Per Mertesacker spoke about, the benefits of teammates knowing each others game so well are intangible, but there’s a reason why football managers preach about having a settled squad and why they prefer not to turnover large amounts of players each summer.

So, onwards and upwards.

Meanwhile, it was a busy day for some of the young players with a number of loan moves sorted and one more in the pipeline. Dan Crowley has gone to Barnsley until January, Isaac Hayden will spend the season with Hull, and he’s likely to be joined by Chuba Akpom at the KC Stadium.

They look like decent moves for all concerned, especially Akpom who really needs to play regularly to develop the way he would like. The desire to stay and fight for a place is admirable, but was always unrealistic for a player who has never scored a senior goal. There’ll be pressure and expectation at Hull as they look to bounce back from relegation, so it’ll be interesting to see how he gets on there and copes with that.

Right, that’s that for this morning, more tomorrow with a Community Shield preview and the rest.