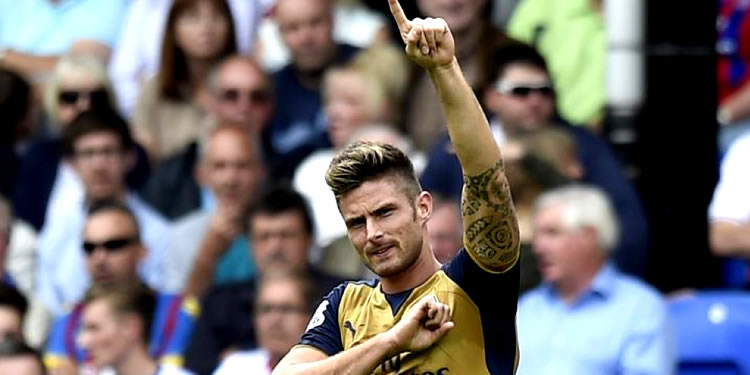 A return to last season’s formation and line-up brought us our first win of the season, but as usual it was hard work at Selhurst Park.

With Ramsey ostensibly on the right, Alexis left, and Cazorla back in the centre, we played very well in the opening period. There was more fluency to our football, we dominated them in terms of chances and one lightning breakaway saw Ozil feed Alexis in an area where you’d expect him to score 9 times out of 10. He’s clearly not 100% match sharp yet, having had little in the way of pre-season, and he fluffed his lines when he should have put us ahead.

It was Ozil who provided again, this time for Giroud in the 16th minute when we took the lead in spectacular fashion. A flat driven cross was acrobatically hooked in by the Frenchman for his, and Arsenal’s first goal of the season. He spoke afterwards of wanting to score more goals with his ‘first touch’, but this was a fine way of opening the account for the new campaign.

There were further moments of danger, the Palace keeper being the busiest of the two, but just after Alexis had squandered a great chance to put us two up – heading a Monreal cross over – Palace were level. They worked the ball to the edge of the box, and laid it off to Joel Ward who fizzed a low shot into the bottom corner.

Before the game, Arsene Wenger had spoken about wanting his team to be more aggressive. You think of snapping into tackles, being strong and physical, but I think this goal was a perfect example of what he meant. Koscielny – otherwise really very good – turned his back on the shot, leaving the keeper rather too exposed.

Rather than throw himself at the ball to block it, he was found wanting there. It was poor defending, especially coming after a situation last weekend where he was similarly passive, and I hope somebody will have a word with him, because those small moments can be the difference between conceding and not. Yesterday it was costly, but thankfully not fatal.

Early in the second period we got away with one when Connor Wickham hit the post from close range, while at the other end Ozil was pulling the creative strings. For all his quality though, the winner came from the sheer desire of Alexis whose leap and header to get onto the end of a Bellerin cross forced Delaney to deflect the ball into his own net. This is why he’s so important, he creates things not just with his footballing ability, but through sheer force of will.

The 64th minute substitution of Francis Coquelin was inevitable given that he’d been booked before half-time and had committed a couple of fouls – one of which drew a last warning from referee Lee Mason. Maybe I’m just viewing this with my Arsenal hat on, but none of the fouls after his first yellow were worthy of a second – although the old ‘cumulative’ thing might have been in play.

I think the panic about him getting sent off was down to the crowd’s very natural reaction to those fouls, something Arsene Wenger pointed out, but also the fact that nobody quite knows what merits a yellow card or not these days. Players used to get booked in the past and I don’t remember all the panic and hysteria – the idea that a player with a yellow should immediately be taken off seems a relatively new one to me.

I thought Coquelin had been playing well overall, and isn’t there something counter-intuitive to the desire to have a DM who tackles and blocks and does the hard physical work, with the panic that sets in when he gets booked now and again? If you play in that position, yellow cards come with the territory. I think the decision to take him off was obviously the right one, but for me it says more about the game and the arbitrary way in which its officiated these days than the player himself.

We were forced to defend, as you’d expect, and there were a couple of moments from set-pieces that were a little too close for comfort – one header straight at Cech and another over the bar from inside the 6-yard box, so we rode our luck a little. Mikel Arteta came on and showed that he’s still got something to offer, with intelligent, well-positioned destruction, and in the end we hung on to take the three points with a repeat of last season’s scoreline here.

We had a good, fluent game in the first half and when they came back to 1-1 it was a mental test to see how we could respond. We managed to find a second goal and after that in the second half of the game we just had to dig in, fight, and we did it as well. I’m pleased because we have shown many different aspects that will be very important in the season.

And on Ozil, who created 5 chances from open play, and of the 54/55 completed passes he made 37 of them were in the Palace final third:

He was magnificent. He works harder than people thinks he does. He is not spectacular in his defending but he wants to do the job, he wants to help the team. What I liked in his game today was he made many runs without the ball behind the defenders, which is a bit new as he likes to come with the ball. Today he mixed up his game better.

You know, when he talks about wanting more goals from his team, it strikes me that greater efficiency with what Ozil already provides us would go a long way to achieving that. I was a little worried when he was replaced by Gibbs as we settled for the one-goal lead, simply because he’d been so instrumental in almost everything good we did. Hopefully a performance he can build on.

You could say likewise for the team. More than anything it was about getting the points after last week’s disappointment, but there were encouraging signs in aspects of our game. I think there are still some defensive issues we need to work out, but creatively we were better than the West Ham game, and with a good week between now and next Monday’s clash with Liverpool, we’ve got time to sort a few things out on the training ground.

As ever James and I will be here with an Arsecast Extra for you, however we’re not recording until lunchtime so it’ll available for you later this afternoon. If you have questions or topics for discussion, please send to @gunnerblog and @arseblog on Twitter, but I suggest waiting until about midday so they don’t get lost in the mix.

We’ll have all the news/reaction throughout the day on Arseblog News, podcast up for you later on as I said, until then, have a good one.