Wilshere or Walcott for the right hand side? + Arsecast 351

Today’s the day when we find out who’s going to be fit and ready for our weekend game except our game isn’t on till Monday because of TV and then you just feel like going back to bed. The early news is no Arteta, no Oxlade-Chamberlain, no Debuchy and Aaron Ramsey is a doubt because Tom Huddlestone tried to kick his leg across the Humber Bridge on Monday night.

If there’s any worry about him at all I think Monday night is a decent chance to give him a rest so he can recover fully for the trip to Old Trafford next weekend where he’ll be hugely important. When I say I figuratively want him to do a bird poo into Ashley Young’s mouth in a football sense, you all know me well enough to know I also mean it literally.

If Aaron is missing, then who he chooses to play on the right hand side will be very interesting. The choices, as far as I see it, are Theo Walcott and Jack Wilshere. Away at Hull on Monday, with the game pretty much won, I think it was telling he opted for like for like (or at least similar-ish to similar-ish) change by putting on Jack Wilshere, a central midfielder, ahead of Walcott.

I think we all know that on paper Theo is the more natural choice for that position, but the manager currently prefers not-Theo. Although he did get 6 minutes of playing time (bringing his total to 31 from the last available 1020), he came on in place of Giroud and, unlike Wilshere whose appearance had some real verve to it, was notable only for the glorious chance he missed late in the game – and that’s not be critical, there’s not a lot to expect from a player who is coming on at that stage of a game, it’s essentially a time-waster.

The question is: what can we infer if he does choose Wilshere? Is it that he’s completely lost faith in Walcott, or that he simply prefers the balance of the team right now with a central midfielder on the right hand side? Perhaps a little from column A, a little from column B, but if Walcott can’t get a start at home against a side sitting in 8th place with nothing left to play for then you do have to wonder about how he’s ever going to get back into the team.

My gut feeling is that if he’s got the chance to give playing time to Wilshere or Walcott he’ll choose the former, because he sees him as more important to us in the long-term. He knows exactly what he can get from the latter at his best and at his worst, but with Wilshere we haven’t come close to seeing his talent fully realised, and that might be where the decision is made, even if it means playing him out of position.

If it doesn’t quite work out as well as he’d like, he can always throw Walcott on with a bit more than 5 minutes to go to see if he can have an impact. Anyway, perhaps when the questions about the UK general election, what he thinks of the current episode of Mad Men and some other football related thing that probably has nothing to do with Arsenal have been asked, somebody might bend his ear on that particular issue.

Some extra reading for you this morning from Tim Stillman on how Santi Cazorla’s influence and how he would be his choice for player of the season. Check it out here. 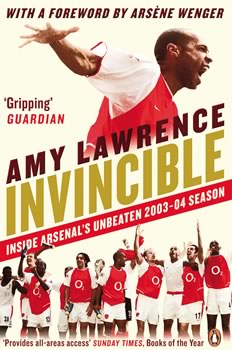 Right then, time for this week’s Arsecast. On this week’s show I chat to Amy Lawrence about Jack Wilshere and what he’s got to do to win his place back in this side, summer squad shuffling, the importance of Francis Coquelin and this weird thing that’s going on with regards to fitness. Amy also very kindly has given 5 copies of the paperback version of Invincible to give away, so listen in to find out how you can win one. There’s all the usual waffle in there too, as well as your first listen to the official Arseblog FA Cup song!

You can buy Invincible in all good books or from Amazon right here.

To download this week’s Arsecast directly click here – 33mb MP3. The Arsecast is also available on our SoundCloud channel, as well as via the SoundCloud app for iPhone and Android. You can now also find it on the Stitcher podcasting app for iOS and Android. Or, you can listen without leaving this page by using the player below.

Right, all the latest from the press conference and more on Arseblog News throughout the day, more from me tomorrow and the Gent will be here later with his weekly review.