It was a mesmerising sight, yet at the heart of it, there was also something a little odd. The Gunners were giving a display of scintillating attacking verve, the players constantly interchanging positions with each other, mixed up by some devastatingly rapid counter-attacks. Soon enough they would go 2-0 up, with goals from Alexis Sanchez and Aaron Ramsey. Yet, the player in the middle, the pivote, the one who should be at the centre of it all, was completely non-existent. It was the same story last night against Swansea. Arsenal weren’t as fluent though they bumped passes off each other confidently; however, Francis Coquelin, playing in the holding role, was completely ignored.

In the previous game against Hull City, he was even more of a non-factor and by the time Arsenal had gone two-up with 35 minutes played, and the win effectively sealed, Coquelin had made only 9 passes. He was much more involved after that, making 47 more passes as the game ended 3-1, yet it was if as the Arsenal players were telling him, “don’t touch the ball, you’ll ruin the attacking momentum.”

Of course, that’s an unfair assessment of Coquelin who has invigorated the side through his tenacity, breaking up play and then laying the ball off simply. But with the game being played ahead of him, he’s sometimes seen as bit of an afterthought. That was the case against Swansea, a fixture which Arsenal lost 1-0, with his team-mates seemingly trying to play despite him.

Swansea defended deep and in numbers, and it was torturous stuff to watch at times, as Arsenal monopolised possession but laboured to find space. Coquelin would often stand in the centre, not offering himself, though he would make short, bursting runs to try and drag opponents away from the man in possession. When Per Mertesacker had the ball at the back, he would essentially play a game of double-bluff with the highest midfielder, in this case Gylfi Sigurdsson, pretending to act as an outlet for the man in possession, when really he is trying to take them out of the game. If he was left free, of course, he would try and get on the ball, but his use of it can be so limited that he’s mainly there as a decoy.

It’s a strange tactic, highly unorthodox and risky against the wrong opponents, but totally Arsene Wenger. As Wenger explains, he tries to play as much of the game as he can in the final third so what he does his push his central midfielders up the pitch so that it opens the space for the centre-backs to pass it through. He says he is “comfortable with the fact that it sometimes leaves us open in the middle of the park. We want to play in the other half of the pitch and, therefore, we have to push our opponents back. But my philosophy is not to be in trouble, but to fool the opponent into trouble.”

As such, how the pattern of the game unfolded against Swansea is exactly the way Wenger likes it despite his claims after the game of Swansea’s negative tactics because it allowed Arsenal to play in the opponents half. Breaking down such opposition is what the team practices regularly on the training ground and here, Wenger tried to use Coquelin’s limitations as a distraction to get Mesut Ozil, Santi Cazorla and Ramsey on the ball as much as possible.

When the centre-backs had the ball at the back, one of those midfielders would drop in into the space to the side of Coquelin unmarked and try and play it through. If the opponents followed them then fine; it would mean that either they would vacate the space in front of the defence for one of the attacking players to run into, especially Alexis, or push up as a collective, creating space to run behind. Aaron Ramsey is key in regards to this tactic as he can perform a number of functions at the same time: act as an extra midfielder whenever Ozil drops deep thus still having the same number of players between-the-lines, or try beating the offside trap with his powerful running. However, with Swansea on the night not rising to the bait, he wasn’t quite a threat behind as he was against Hull when he scored following a fantastic pass over the top from Santi Cazorla. 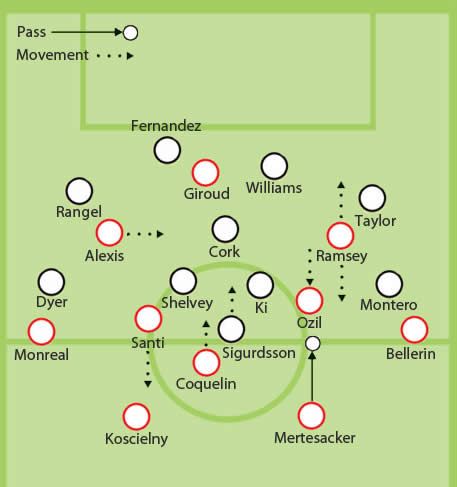 On the whole, it was a frustrating night for Arsenal who couldn’t really play the zippy passing game that they usually do. Wenger said nerves might have had some part to play which is strange considering that Champions League place is nearly wrapped up. But it’s a salient point because what Arsenal are about is not necessarily good football per se. It’s about the players enjoying each others work and what they can do when they love each others’ work.

Remember when Ozil signed, in one of the first interview he did, he said Arsenal would go out on the pitch to have fun. That was before the match against Manchester United, incidentally their next fixture, when Arsenal were defeated 1-0, though they gave anything but the impression of fun. They froze, their ability to enjoy the occasion tainted by the distraction of “winning the game”. And indeed, Arsenal’s long unbeaten run has seemingly happened when their final league objectives had been pushed to the background almost, and the players could express themselves. Coquelin has been an important part of that, in his words, allowing the attacking players to commit “10% more to the attack and score goals and win the game.”

But of course, to be “The Answer” in The Gunners midfield, for Arsenal to be real contenders, they probably need to show 10% more than they have this season. It’s possible.