There are things that remain familiar throughout your life, even if you go a long time without experiencing them. Like that taste you get in your mouth if you hit your head, or losing a game in smash and grab fashion that you really should have won. If the graphic of second half shots doesn’t sum up last night’s loss to Swansea, then I don’t know what does. 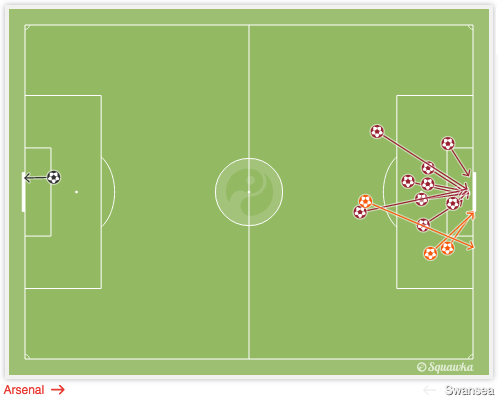 Arsenal had 12 attempts on goal, 9 of them on target, yet lost to Swansea’s only effort. How many times down the years have we bemoaned this exact situation? A clutch of Arsenal shots and we concede to the first one we allow the opposition. And it wasn’t even a shot, it was a soft header that the keeper should have done better with, goal line technology proving that Ospina’s desperate attempt to keep it out was fruitless.

That it came with just minutes of normal time remaining, after we’d spent most of the second period camped in their half trying to find a way through, was an illustration that although this team has been playing very well in recent months, we haven’t rid ourselves of all our self-destructive demons just yet.

The first half really isn’t worth talking about, only to say that the pattern of the game was obvious from the start. Arsenal with lots of the ball, an extremely well organised and disciplined Swansea side sitting off and denying us space. As is typical with first halves, there wasn’t a lot of urgency, we remained patient if a little ponderous at times. Still, at home, with the way we’ve been playing, we had the whole of the second half to turn the screw.

And, in fairness, we did that. The chances started to come. Alexis and Ramsey both hit the side-netting; Giroud should have done more when set-up by Ozil; Cazorla’s shot was well held by Fabianski with Alexis poised to pounce on the rebound; and a brilliant Monreal run saw the left-back hit his shot straight at the keeper – and perhaps a less honest player would have gone down under the challenge and looked for what would have been a penalty, no question.

Wilshere replaced Coquelin as we looked for the breakthrough and, oddly, Walcott came on for Giroud. I know the Frenchman wasn’t having his best game but it seems odd to take off your second highest scorer when you’re looking for goals – especially when Theo is hardly a like for like replacement and the lack of an attacking focal point became obvious as we then had nobody to cross the ball to when we did make progress down the flanks.

Still, Aaron Ramsey fashioned the best chance of the game in the 78th minute when his clipped ball fell for Alexis, 7 yards out with just Fabianski to beat. You’d expect better from our top scorer than hitting it straight at the keeper and with the keeper on the ground Walcott’s follow up was equally poor. That was the moment we should have won the game, or at the very least taken the kind of lead that would have forced Swansea to come out and play a bit more – allowing us to exploit the space.

Instead, it became the ‘if only’ moment of the game when Montero did Bellerin, got a cross into the back post where Gomis, marked by the otherwise very good Monreal, nodded a header towards goal. I thought Ospina’s attempt at a save was poor, and I think his basic lack of reach was an issue here. He’s just about 6′ and like third goal Monaco scored, you can’t help but wonder if a taller keeper would have had done better with it.

The lateness of the goal left us with 3 minutes + injury time to try and do what we couldn’t in the preceding 87, and in the end it played out to its inevitable conclusion. A 10 match unbeaten run came to an end in typically Arsenal fashion, and afterwards the manager put the blame on the finishing:

Overall I was encouraged by the quality that we showed in the second half, but it’s frustrating. We rushed our finishing because we had plenty of chances in the second half. It was just a question of scoring a goal.

And he sums up my feelings on Lukasz Fabianski who played well but was made look outstanding because of our lack of conviction in front of goal:

Fabianski did well tonight, but I believe as well on some occasions we made it too easy for him.

There was nothing in the litany of saves he made that wasn’t much more than routine, the disappointing nature of our finishing was as much a factor as the quality of his goalkeeping. Still, he was equal to everything we threw at him, and our goalkeeper was found wanting – and that’s the difference between the two sides. When you fail to take your chances at this level, it so often proves costly, and that was the case last night.

If the manager wants to be critical of Swansea’s defensive approach, he’s entitled to do that, but the onus falls on us to break them down. They came to play a particular way, executed it pretty well overall and frustrated us. They’re not there to roll over and let their belly be tickled, and that’s something we’re going to have to deal with between now and the end of the season, because you can be quite sure our future opponents will have been watching that with great interest.

Perhaps not Man Utd, where we go on Sunday, but West Brom, Sunderland and, in particular Aston Villa, will be studying the tape of that one as they look to get something from the upcoming fixtures. And maybe there’s something in there for us to study too, to figure out how we can cope better when a team does that to us and how best to deploy our substitutes so our attacking options aren’t quite so one-dimensional.

Overall, a disappointing night – especially after such a good run – and one we have to get out of our system quickly because the final games of this season remain hugely important. There’s simply no time for this to be anything other than a little blip, fingers crossed we respond and quickly.

Right, that’s that. James and I will have an Arsecast Extra for you this morning. As ever if you have any questions or topics for discussion, send to @gunnerblog and @arseblog on Twitter with the hashtag #arsecastextra.

That’ll be available for you later this morning. Until then.