After fifteen intoxicating first-half minutes, everybody in the ground was left wondering how Arsenal weren’t ahead. Later, those doubts were erased as Hector Bellerin curled home to spark a three-goal first-half salvo for Arsenal, and pave the way for an excellent 4-1 win. But there comes a caveat.

Because while those three goals displayed the characteristics that make Arsenal a joy at the moment – the rapid passing, an infectious energy and a new-found ruthlessness – sandwiched in between was fifteen minutes of mess, where Arsenal were visibly befuddled about how best to approach the next phase of the match. Liverpool grew in confidence, probed for room in midfield and nearly punished Arsenal when Lazar Markovic went through on goal but inexplicably tried to pass the ball instead of shooting. Thankfully Arsenal showed the mental resolve that has been the other feature of their good form to respond emphatically.

Perhaps I’m being a bit harsh here. Inevitably when a side tries to press high up the pitch, there arrives a period of come-down, and whether accidental or not, sitting off and soaking up pressure is sometimes a good way of finding a second-wind. On the other hand, however, Arsenal tend to have moments like this where they inexplicably pass up momentum to the other side before salvaging it.

Think back to the 3-0 West Ham win three weeks ago where Arsenal dominated the first 55 minutes but nearly gave their opponents a way back into the match seemingly by taking their eye off the game a little bit, and neglecting their defensive duties. Here against Liverpool, the drop-off in Arsenal’s performance levels could be attributed to deteriorating fitness levels, though the players also seemed a little too pre-occupied with their initial gameplan, incredulous that it didn’t yield the results that it should have, thus anxiousness seemed to pervade their game. Once Arsenal remembered how to play their game again, they were simply too good for Liverpool.

If Arsenal’s line-up was as expected (after all, Arsene Wenger merely chose the 11 best players at the club), there were some question marks as to how they would be deployed. Wenger had a choice to revert to the 4-1-4-1 which he mainly uses in big games or stick to the 4-2-3-1 that has broadly served them well in their recent run of form. He chose the latter, with Aaron Ramsey instead shunted to the right-flank. In the past when Wenger did this, there seemed little method in it beyond trying to fit all his best players into a line-up (or sometimes as a means of playing an out-of-form player in form).

Here though, there was a clear tactical brief given to Ramsey to use his energy to press the weak links Mamadou Sakho and Alberto Moreno (the last 6 of Liverpool’s goals conceded have come from that side) and then force them back with his powerful off-the-ball running. Looking at it from a different slant, it was also a clear thumbs-up to Mesut Ozil that he is now Arsenal’s key man, pivotal in gluing their passing game together.

And sure enough he was quickly influential as Arsenal started energetically, zipping the ball to feet and harassing Liverpool’s centre-backs up the pitch. It was he and Santi Cazorla who would set up the first chance, swarming around Joe Allen to turn the ball over following a square pass inside, before Alexis screwed his shot wide. The next 15 minutes would see a similar pattern as The Gunners won the ball back 10 times in Liverpool’s half.

First, Santi Cazorla would force a good save from Mignolet after Francis Coquelin intercepted a pass, then Ramsey would waste a good chance following hard work from Olivier Giroud to steal the ball from Kolo Touré. The Gunners’ through-marking was excellent, with each player taking a responsibility for a man whenever the ball reached their zone, while the twin threat of Markovic and Coutinho, the two players in the system who were anticipated would cause Arsenal the most problems, was expertly dealt with by Coquelin, sweeping up like a hitman in front of the defence. 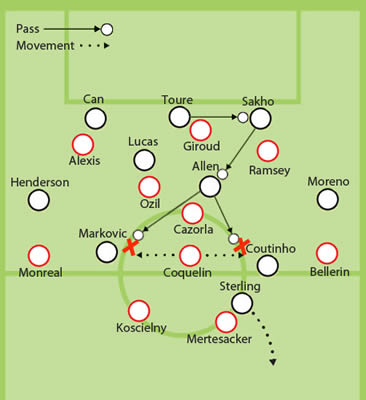 Arsenal, though, would have to wait another 15 minutes to regain their attacking impetus, and by the time they took the lead, the game shifted to pattern where Arsenal were growing ever-more comfortable on the ball. The opener saw Ozil pick the ball up on the centre-circle before releasing a glorious diagonal pass to Ramsey on the right.

He would eventually pick out Bellerin slaloming into the box to place a shot into the bottom corner. Ozil again was influential in the second-goal, buffeted down by Sakho for a free-kick which he superbly placed into the same right-corner. Alexis made it three after good pressing from Coquelin before Giroud wrapped up the win late on. Jordan Henderson would pull one back from the penalty spot but Liverpool were never able to build any momentum as Emre Can picked up a deserved red-card for a hack on Danny Welbeck.

After the game, Wenger praised the intensity which Arsenal played at, not just without the ball but with it, as some of their combination play was scintillating. Indeed, their passing has seemingly gone up a level recently, especially with Giroud becoming such a tour-de-force technically and Ozil knitting things together with the now not-innocuous way he drifts into space, trading quick one-touch passes with his teammates. It’s funny what wins do to perceptions. Yet, Wenger also went out of his way to give credit to Francis Coquelin for “the convincing way he broke up many attacks.”

Last week in my column, I talked up how Coquelin’s role in this system reliant, not in taking the ball from the centre-backs, but in covering spaces quickly, generally across the pitch. We saw against Liverpool how this works because he rarely ever offered himself on the ball to either Laurent Koscielny or Per Mertesacker. (He only received the ball 11 times in his own half from the back-four).

Rather he tended to move left and right of the centre-backs to try and create space for the centre-backs to pass through. On the one hand, that creates a weakness in Arsenal’s play that Liverpool curiously didn’t try to expose. They never really pressed Arsenal up the pitch and as such, the centre-backs could generally wait for the space to open up before passing the ball into midfield.

On the other hand, it suits this Arsenal side such that they are not reliant on continuous ball circulation as they were with Mikel Arteta in the line-up. What Coquelin’s role instead is to win possession back up the pitch when the ball becomes loose and play it simply to one of the forward players. Wenger says Arsenal are a team who “like to play in the final third” therefore perhaps he realises that a ball winner rather than a ball player is a better fit for this strategy. Certainly Francis Coquelin has proved himself indispensable once again with this performance.

Coquelin role limited mainly to hitman – get in get out quickly – than building (received 11 passes from back four). pic.twitter.com/c3XbwRt7Bj

On the January transfer window, and why it should get busier for Arsenal