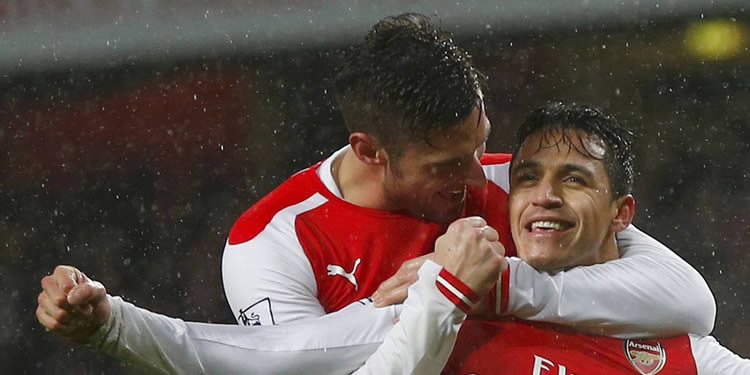 So that’s the Interlull done and dusted for another season and it’s time to look forward to what’s left of this campaign.

There are just over seven weeks of Premier League football left and just under two months of football in general if we win our FA Cup semi-final, so we’re very much in the closing stages now. I don’t know if it’s just me but this season has absolutely whizzed by to this point. Time flies when you’re having fun? I’m not quite sure about that, but it certainly goes by quicker when you’re not in the throes of drama after crisis after saga after drama.

So, this is what we’ve got left in the league:

It’s interesting that each difficult game, and there are three, is followed by one you would expect us to win. Actually, I don’t know if that’s interesting, but it’s handy. I think we are very much in classic ‘one game at a time’ territory. We’ll preview this weekend’s game against Liverpool in the coming days, but you look at the Chelsea fixture as one from which we really have to get something.

Not simply from a points perspective – every one gained between now and the final game is a step closer to the top four (at least) finish – but having already beaten Man City and Man Utd this season, it would be an important victory psychologically as well. It was a common, and understandable, complaint that our failure against the big sides was a hindrance to our development as a team, so making sure that at the very worst we draw with Chelsea would go some way to genuine ensuring progress has made this season in that regard.

Also, they are a pack of absolute wankers and it would bring me great pleasure to beat them. It’s for this cutting edge analysis that people come back to this website. But seriously, they are wankers. But even more seriously, I hope they’re cheated by the referee out of 8 clear cut penalties (campaign) and we win with a goal that couldn’t be more handball (campaign!!) if it tried after a move which begins with the most blatant foul on any footballer anyone has ever seen (CAMPAIGGGNNNNN!!!!).

That would make me laugh.

Meanwhile, there was an interesting quote from Olivier Giroud the other day talking about how his competition with Alexis for top goal scorer is pushing him towards ending the season as well as possible. Speaking to RMC radio, he said:

“I’m not going to say something silly because it’ll be reported, but why not finish ahead of Alexis? We push each other, we’re on 13 goals [in the Premier League], and I would like to score some more to help the team achieve its objectives.”

After the Chilean’s explosive start to the season and the HFB’s broken leg which saw him miss three months, people would probably have scoffed at the idea of the two of them being close in the goalscoring charts, but they are.

In all competitions Alexis has 19 while Giroud has 17. The former Barcelona man is going through something of a goalscoring drought lately with just 1 in his last 12, while Giroud has 11 in 14. Of course there are reasons. At the start of the season, with no Giroud, no Walcott, no Ozil, and in a team that was struggling to find the right balance, Alexis’ goals carried the team for a while.

His effort and endeavour was obvious and vitally important. It’s little wonder that in recent weeks he’s looked leggy and a little less effective – but he’s also not had to be. The return of Giroud helped share the burden and three months off means he’s been fresh. Also, the reintroduction of Ozil has changed the dynamic of the team slightly too, and we’re simply not as reliant on one single player as we were in the opening months.

Nevertheless, you do get the feeling that if we’re going to finish the season as strongly as we’d like, we’re going to need Alexis to start firing again. He’s a player the manager will play even when he’s not 100% – ahead of others who are clearly fresher – because he offers the threat of unpredictability and quality in attack that nobody else really has.

It’s impossible not to see him starting in the ‘big’ games and it would be very timely indeed if he could find his shooting boots again. All the same, I like the idea of two players scrapping it out on a competitive, personal level too, and hopefully that benefits us.

Finally for today, Raheem Sterling says that he’s ‘quite flattered’ by Arsenal’s reported interest in him, and with all the talk of Theo Walcott being involved in a potential swap deal, we thought we’d run a poll over on Arseblog News. I think the results speak for themselves. 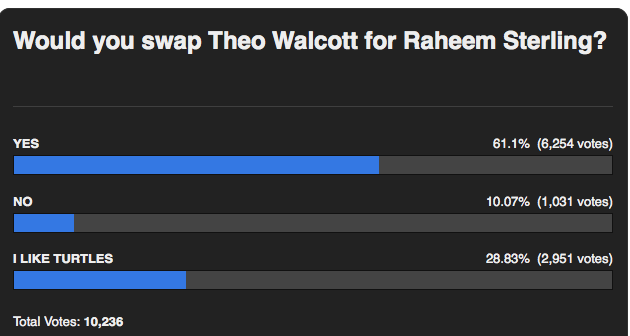 Right, that’s yer lot for this morning. Despite tomorrow being BEER FREE FRIDAY here in Ireland (that’s the official name), I’ll be here as normal with an Arsecast and everything, so stand by for that. There’s also bound to be team updates ahead of the game against the Mugsmashers on Saturday so keep an eye on the news site for all the latest.