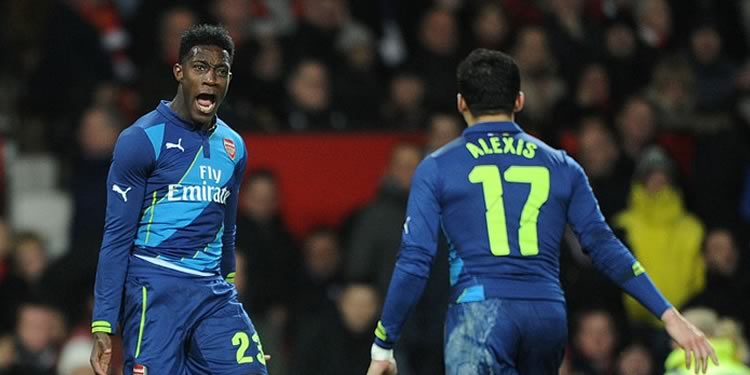 Well, that was fun.

A goal from one of their former players at Old Trafford sent us through to the semi-finals of the FA Cup against a United side who had been reduced to 10 men by a referee whose performance in that famous stadium would have had him strung up by his gizzards from a lamppost in the Ferguson era.

It was, overall, a cracking cup tie. Not the highest quality game you’ll ever see but full of effort and endeavour from both teams, and in the end we had more of it to see us through – especially after United shot themselves in the foot with a daft sending off.

The team selection was something of a surprise, Danny Welbeck getting the nod up front, something Arsene Wenger said afterwards he’d only communicated to the player ‘very late’. He obviously wanted to use the occasion to get something extra from the England international, but in the first period it looked as if it was all a bit too much for him.

Things didn’t happen, balls bounced off him, and when he did find himself in good positions he was ignored by his teammates who chose the wrong option at least twice. His response to that was fantastic, however. He got on the ball more in the second half, chased, harried and made life difficult for his former teammates, and when Antonio Valencia’s back pass was slightly under-hit, he was the player on his toes and ready to make something happen.

He nicked it away from David de Gea, the Spaniard left stranded, before readjusting his body position and rolling it into an empty net. He celebrated too. I’m sure he has all the respect in the world for the United fans, but he’s an Arsenal player because their manager made it quite clear publicly that he wasn’t good enough for them anymore. Not good enough to stay and get games ahead of Falcao, left on his £350,000 a week knackered-kneed arse even when they needed a goal late on, so why shouldn’t he enjoy the moment at a club that does think he’s got what it takes?

He didn’t go overboard, he didn’t run the length of the pitch to knee slide, he just celebrated his goal with his teammates then got on with the rest of the game. Having not scored since December 28th against West Ham, it’s a very welcome return to goalscoring action too, and what a time and place to get it.

The teams had gone in level at the break after two goals in quick succession. Firstly, great play from Alex Oxlade-Chamberlain who, a number of times, roasted Luke Shaw like the chicken in all the sandwiches he obviously loves to eat, saw him lay the ball off to Nacho Monreal in the United area. Their defence had switched off. Valencia was nowhere, the Angel of Mary stood watching before the penny dropped, and even a goalkeeper as good as David de Gea could do nothing about the cool near post finish.

Their equaliser came from a familiar source. A di Maria cross from the right hand side found Rooney between the two centre-halves and his header thumped past Szczesny to make it 1-1. There are all kinds of inevitabilities in life; sun rises, sun sets, sky is blue, grass is green, ‘In the air tonight’ makes you want to rip off your own ears, and Wayne Rooney scores against Arsenal. Szczesny had to save down low at his near post from di Maria before the half was out, but level at the break seemed fair enough in the context of the game.

I’ll admit that I was worried that the referee might have a big part to play in the game, but I never suspected for a second what would transpire. After Ramsey (on for the injured Oxlade-Chamberlain), tussled with di Maria the former Real Madrid man took a tumble in a dangerous area.

‘Oh bollocks, this could be costly’, I thought moments before Michael Oliver, rightly, booked him for diving. He then pushed the referee in the back to get a second yellow within seconds and despite the protestations of the United players he was off. Having been punished for going for it late against Monaco, you could sense the reluctance of the Arsenal team to over-commit and make the most of the man advantage.

Instead United had most of the ball, which they aimed, Jack Charlton style, towards the fuzzy head of Fellaini time and time again. For the most part we dealt with it well, Koscielny stuck to him like glue, Mertesacker won headers, and their frustration grew. After Rooney wasted a good free kick, Januzaj was next for a yellow for diving. Again the referee was spot on, he took a tumble in the box with Monreal nowhere near him, but for any official, having sent off a United player, to do that at Old Trafford was, frankly, astonishing.

Having watched similar situations unfold time and time again over the years I was all set for the penalty to be awarded, but in a week when referees have been under the spotlight for getting things badly wrong, he got it absolutely right. Credit to him. Also, if Januzaj had stayed on his feet he might have caused us a real problem, but thankfully his desire to cheat outweighed his desire to do something productive with the football.

Late on de Gea, having previously denied Cazorla with a brilliant save, made a better one to prevent Alexis making it 3-1, and even with 5 minutes of injury time, they didn’t come close to getting the goal they needed. The long ball launched time and time again was meat and drink to the defence, and with Coquelin prowling around midfield to mop up we were never in any genuine danger – despite the fear you naturally have in those circumstances.

Overall I’m pleased above all with the performance and the mental aspect of the game. It was always positive and you know that I like that.

And of goalscorer Welbeck:

We all want to do well when we play against our former club to show that we are a great player but it’s not easy to deal with the mental situation. He focused just on his game and didn’t do anything special, he just played football like you want him to play.

Monaco aside, when you consider the goalscoring form Giroud has been in, it was a brave decision to start him, and one that obviously paid dividends. It feels like that could be a big goal in his Arsenal career too, one which might help him kick on a bit after a period which has raised some doubts.

I thought Monreal was outstanding at left-back and thoroughly deserved his goal, while in midfield Coquelin’s renaissance is one of the feel-good stories of the season. He got elbowed right in his broken nose by the abject Fellaini in the first few minutes of the game and nobody can tell me that wasn’t planned and deliberate. No bother though, he wiped away a bit of blood and then from 12 duels with the Belgian won 10 of them. That’s how to respond.

United were physical at times, we stood up to it. United were divey at times, the referee didn’t buy it and that helped. I don’t think it’s one of those games that will go down as a great Arsenal performance, but it was certainly a great Arsenal win. Having not won at Old Trafford in 10 games, losing 9 of them, it feels like something of a weight has been lifted from us. That’s two wins in Manchester this season, something of a turnaround who have been roundly criticised for not doing being able to do it away from home against the biggest teams.

While there are still moments and performances that drive you mad, it does feel as if we’re finding a way to address some off the issues that have frustrated for so long. Make no mistake, the pressure on us last night was huge, and our response was to come away from Old Trafford with a win and semi-final against either Reading or Bradford.

Not a bad reward for a decent night’s work.

Right, stand by this morning for the Arsecast Extra, James and I are recording very early this morning so we’ll get it up for as quickly as we can. Get it up like a Coq.