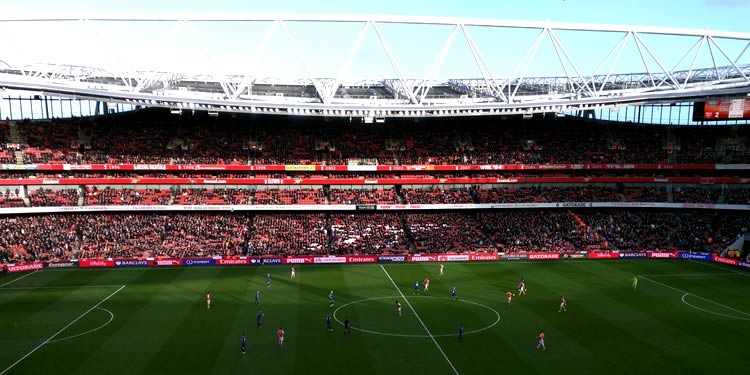 In the opening stages of yesterday’s game, it’s fair to say there was a nervousness about the crowd after what happened on Wednesday night. It all felt quite flat.

The manager had made a couple of changes, with Gabriel coming in for Mertesacker and Oxlade-Chamberlain for Welbeck, but he kept faith with Olivier Giroud despite how badly it went for him against Monaco. Everton had lots of the ball early on, but did very little with it.

It’s strange to see an Everton side this insipid. Considering how delicate and obviously affected by the Champions League game we were, I expected them to try and rattle us further. Instead they were happy to pass it around at the back, keep it for periods but, ultimately, fail to create anything of note or cause us to doubt ourselves further.

When they did get a chance to hurt us, it was down to a mistake on our part. Gabriel let a long ball bounce over his head, Lukaku was on to it quickly, and we had David Ospina to thank for coming out quickly, getting a crucial hand to the ball and then making a great sliding tackle down by the touchline. It was excellent goalkeeping.

Thankfully that was an aberration on the part of the Brazilian who, after that, was absolutely superb, I thought. The performances of Gibbs and Koscielny worried me – particularly when it looked like there was no communication between the two at times – but the man with no English was certainly the more accomplished of the centre-halves yesterday. One brilliant tackle in the box on Lukaku banished any doubts that might have been in his mind after the previous mistake, and I enjoyed him a great deal.

At the other end we weren’t exactly peppering the Everton goal with shots, but Giroud glanced a header just wide, before the Frenchman struck from an Ozil corner. A sweeping right-footed effort flew into the bottom corner leaving Tim Howard stranded, and it felt as if a weight had been lifted from his shoulders. And of those in the stadium too.

The second period saw us more in control of the game but Ospina made a fantastic save, again from Lukaku, to keep the scores level. We also had to cope with Coquelin getting his nose smashed to bits in a collision with Giroud. With no real midfield cover on the bench he played on, looking a little shaken at first, but considering he had most of a hand-towel up there he did really well, That was until a slight error of timing saw him nose, rather than head the ball, the packing flew out, stuff went everywhere and his game was done.

The stoppages worried me, I have to say. We knew there was going to be a lot of injury time and the idea of facing that with just a one goal lead was not a pleasant one. Thankfully we didn’t have to endure what would have been a nail-biting finale when Tomas Rosicky doubled the lead in the 89th minute. His shot took a bit of a deflection to wrong-foot the keeper, but if anyone deserves a good deflection it’s the Czech whose work-rate and verve for the game remain infectious. It meant that injury time became comfortable, rather than terrifying, so thanks for that Tommy.

Giroud should have added the cherry on top of the icing on the cake when he was provided a great chance by a fantastic Bellerin cross (the young Spaniard was excellent again I thought), but he nodded his header just wide. Perhaps an illustration of why he continues to frustrate some fans but ultimately he played his part in what was a very important win.

What was very important today was that we had a mentally united response and we showed that. We are proud of the response that we showed today. Our defensive concentration was at a much higher level than on Wednesday night.

I didn’t really have an expectations of a scintillating Arsenal performance, but I was confident we could do what we did – and that was simply be good enough to win the game. The impact the Monaco shambles had was obvious, but we did what we had to do under the circumstances and the three points were especially important given the way other results went this weekend. Whether the team felt the added pressure of that or not, I don’t know, but result was always going to be far more important than performance yesterday.

As I mentioned, I thought Everton were really poor which helped us, obviously, but we had players who stood out. Giroud worked extremely hard all day; Cazorla was fantastic in midfield again; I mentioned Gabriel already; and, although he was getting some stick from people around me (including one bloke who literally shouted ‘Come on Ozil … run around a bit!’), two assists for Mesut and a hard-working display was a good return from his afternoon’s work (and that bloke might want to read this).

Overall, I think it went as well as could have expected given the context of the game. It was so important to get the right result for all kinds of reasons, and it sets us up nicely for a trip to QPR on Wednesday and, of course, the FA Cup quarter-final next Monday night. More on those games to come.

Anyway, further to that, my seat yesterday was right behind the NBC Sport commentary position where Phil Neville and some other dude were covering the game for the US network. About 20 minutes in, their broadcast assistant (who’d advise them on subs and other match info), turned around and asked if whichever one of us was swearing so loudly might tone it down a bit.

Rather unfortunately for them it was being picked up by the microphones and they kept having to apologise to viewers for the colourful language going out over the airwaves. But I ask you this, when a referee stops a game when he could play advantage for us, what else would you say but this?

I did feel for the guy trying to manage the situation. I spoke to him at half-time and he was obviously so rattled by it he said he was trying to think of ways he might prevent further instances of on-air cursing.

“I was even thinking ‘What if I give him some sweets to eat?!’, and he won’t be able to talk with his mouth full”, he said. The idea of him sourcing, and then handing me a big bag of sweets to make me shut up … brilliant.

Anyway, if anyone could provide me with a download for the full game as covered on NBC yesterday, I’d really appreciate it. And NBC, if you are ever looking for a co-commentator who adds genuine flavour to the game, just let me know. I’d be delighted to help out and on-mic I’m the consummate professional.

I’ll expand on this a bit more in the Arsecast Extra later on with James. I’ll apologise in advance for my rather croaky voice but I’m sure you understand. If you have questions, send them to @gunnerblog and @arseblog on Twitter with hashtag #arsecastextra and we’ll do our best to get to as many of them as possible.

Now, having arrived home close to 2am last night thanks to a delayed flight, I am in serious need of more coffee and some breakfast.