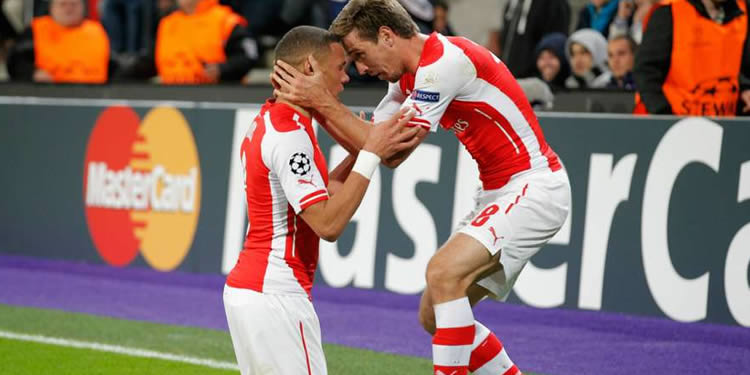 With the anticipated departures of Bacary Sagna and Thomas Vermaelen, Arsenal went into last summer in need of two centre backs. As Calum Chambers’ signing was the only one made in the area, they started the season with just three – one of whom was returning late after winning the World Cup, the other whose Achilles had been troublesome for some time, and Chambers who until August had played all of 25 professional games, none of them at centre back.

Between then and the January signing of Gabriel, both the predictable and the unpredictable happened to damaging effect. Per Mertesacker had just  a week of pre-season before returning to the starting eleven, where he would play every single non-League Cup minute until the FA Cup win over Brighton in late January. The effect was telling. Koscielny’s Achilles kept him out for a couple of months, while Chambers was both unsuited to partnering the German, and needed at right back as Mathieu Debuchy’s ankle injury sidelined him for 3 months.

The man chosen to take the empty centre back space was Nacho Monreal. As with Sagna, another occasionally re-positioned full back, he possesses intelligent positioning and impressive reading of the game. What Sagna boasted that Monreal could not were astonishing aerial abilities and strength in tackles. Monreal’s style had always been to back away from his runners and attempt to steal the ball or guide them away from the dangerous areas. The success of that was mixed, and on account of that, his suitability to the central role was questionable to say the least.

His performances there fluctuated somewhat, but were mostly of a high standard. At first, though, his tendency to stand-off, in a way overly similar to Mertesacker, invited too much pressure onto a backline whose protection, unless Mikel Arteta was playing, varied between inadequate and shambolic.

Yet his selection there really improved the aggressive side of his defensive game. His ability and willingness to stand up to players running at him was his major weakness through his first two and a half years at Arsenal. He still tends to invite his runners towards him but now he is generally far better at coming away from battles as the victor. Even after his difficult first 15 minutes against Wilfried Zaha away at Crystal Palace last weekend, he recovered well over the remainder of the game.

Monreal’s main quality is his technical ability. He does not have the pace to stretch teams like his rival Kieran Gibbs, but the Spaniard is better on the ball. Gibbs’ attacking play is usually ineffective, unless he is given the necessary time and space to pick out the passes and crosses, and far too much of the time, his only real type of movement is to sprint towards the byline and hope for the best.

Monreal, however, tends to sit closer to the edge of the opposition box, contributing far more to the possession play with the midfielders, but also offering an outlet further wide (with generally great deliveries) when necessary. This can be especially useful when the ‘left winger’ is one who drifts into central areas — the best examples being Mesut Özil and Santi Cazorla — in allowing Arsenal to push more of their play through the middle of the pitch, with more width coming on the right.

There are relatively few full backs who, in attacking phases, do not benefit from having a ball-player ahead of them, rather than a more traditional winger type. The performances of both players respectively indicate this. But Monreal’s aforementioned superiority in combining with those players makes him the preferable option for a forward line (and a left side) with them in it. With better end product Gibbs could really cement himself as the superior option at left-back, that’s the challenge he faces now.

Despite Monreal’s improvement as a tackler, Gibbs remains the superior of the two in that department. His tenacity in winning the ball back is valuable, and he is usually the more comfortable when isolated one on one against wingers. Beyond that, if a winger does manage to get past him, he is faster, and more able to fight his way back to the ball. Too often, if Monreal is surpassed it is because he is caught flat-footed, and by the time he sorts himself out, he cannot catch the winger ahead.

Gibbs has that ‘recovery’ aspect to his game, which Monreal does not so much: part of his greater assurance in going into tackles is based on that ability to win the ball going back towards his own goal if needs be. That pace can also be advantageous in counter-attacking situations and easing pressure on the defence when they are being pushed back.

As discussed in my first Arseblog column, having a balance between the pair of full backs is a necessary but often overlooked aspect of building a team. Monreal’s technical and more withdrawn way of playing provides a nice diversity opposite the styles of Mathieu Debuchy and Hector Bellerin. Gibbs’ responsible nature means that defensively there would be not too much of a problem but the lack of variety going forward could prove to be an issue at times, especially with the Englishman’s more questionable end product.

Sagna would often sit higher up-field than Gibbs as, with Arteta in the side Arsenal would see most of the ball on that wing, so despite his technical limitations, Sagna would see the ball more. Gibbs, however, would always break further forward, knowing his pace would take care of him.

Only now, with the players settling into different system and more of the necessary cogs being fit will we see how things have or will change. If more of the play goes from the left, instead, Monreal and his technical ability are near-perfect for that higher up, more possession-centric role, with the right back doing the ‘start deeper; commit higher’ duties.

However, it is tough to say how that side of things will go, and as much as he is below Monreal with the ball at his feet, the competition between them is very close. Gibbs’ best string of performances came at the start of last season, when the team was balanced and Monreal was right on his heels; now the team is coming together again as a unit, but the Spanish international is the one currently in the best form of his Arsenal career.

Ultimately the competitive nature of the fight between them should have a positive outlook. Not just for Arsenal, but for both players as they push each other for that coveted place in the team.