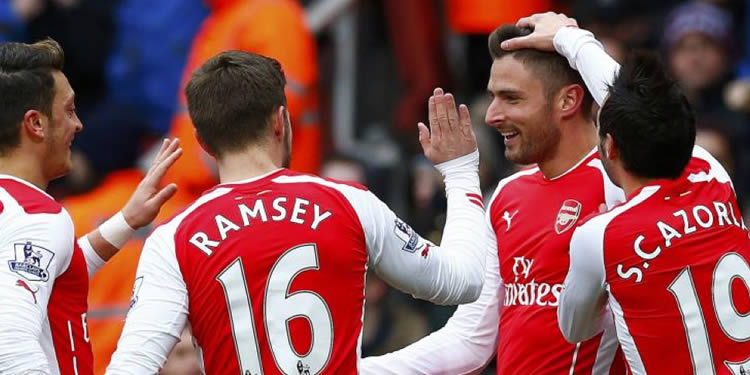 Well, that was fun. We chalked up our fifth consecutive win with five goals, and while there’s no doubt Villa were quite bad indeed, we’ve come up against bad teams many times in the past and not done that to them.

We tore into them from the start and probably should have scored before we did with Theo Walcott’s pace exposing their high line. Still, waiting a mere 8 minutes to get off the mark is not too much to ask and when the goal came it was quite delicious. Per Mertesacker played the ball out from defence into the centre-circle where Mesut Ozil was waiting. His back-heeled flick was a piece of genius, no two ways about it. It sent Olivier Giroud racing clear beyond the Villa defence, towards goal.

The Frenchman’s first touch was excellent, a couple of the subsequent ones didn’t quite match it, but the finish was sweet and he made it 1-0. The assist though, oooof. A nonchalant flick of the heel, guiding the ball perfectly over the defence and into space … you don’t get moments like that very often so they’re worth enjoying over and over again.

Such was the dominance we should have had the game out of sight before half-time. A last ditch header denied Mertesacker a nod-in, an erroneous offside flag robbed Ozil of a goal, Santi Cazorla hit the post, Guzan saved well from Ramsey, and Villa offered next to nothing bar a few corners which Oooooooooooooospina gathered comfortably.

Late in the half the Colombian got down well to make a save from a Weimann header, and early in the second half Benteke had a couple of sights of goal but showed precisely why Villa haven’t scored since the Stone ages [Steve Stone ages? I’ll allow it! – ed] by shooting and heading wide.

They weren’t quite warning signs but at 1-0 there’s always some danger a lapse of concentration might prove costly, but Olivier Giroud returned the assist favour to Ozil, sending him behind the Villa defence in the 56th minute. Perhaps it was the precision of the finish that did for Guzan, but the shot itself was kinda tame and I suspect if our keeper had let that in questions would be asked.

At that point they knew the game was up and it became something of a procession for us. Having been pretty quiet most of the day, Theo Walcott burst into life to get the third. He picked up a throw from Ospina, played it to Cazorla in midfield, took the pass back on the run (although I think Cazorla was trying to find Giroud), stepped inside the defender and curled it home to make it 3-0.

I find him such a confusing player. Having squandered two chances earlier in the game when you’d expect him to do a lot better, he then does that and does it so, so well. Even afterwards Arsene Wenger said his all-round game needs ‘more sharpness’, but that he also expects him to score in every game. Still, that’s two in two now, and hopefully it’ll go some way to rounding out his performances in the future.

The manager sent on Chuba Akpom and Tomas Rosicky for Walcott and Giroud and we spent the rest of the game trying to set up a goal for the young striker. Cazorla could have shot but tried a pass towards him, Mertesacker stayed up from a corner and chipped in a left-footed cross which he headed at the keeper, there was another Cazorla cross which whizzed behind him, and even in injury time he was set up again by the Spaniard but shot tamely at the keeper.

Before that he did get involved to win a penalty which Cazorla dispatched via a frustrated Guzan’s wrists, but the goal didn’t quite come. He looks an interesting player though, and you can see why the manager is giving him some minutes in the hopes he might change his mind about signing a new contract.

The final gloss was applied in stoppage time when Hector Bellerin’s cool-as-you-like side-footed daisy cutter beat the keeper and went in off the post. No less than the youngster deserved after another storming defensive performance and he’s developing into one of the finds of the season. It’s hard to credit that this was just his 11th appearance for the club.

We always looked dangerous when we got between their lines and defensively we were sound as well. Overall it’s a positive day for us.

Let’s show that we can win more and it shows you as well that when the confidence level is higher and when everybody’s back defensively, it makes a difference. Defensive stability is vital – when you don’t have that, you suffer.

Last weekend’s defence was somewhat makeshift, we conceded twice. Now, playing what is, at this moment, our best back four, we kept our fourth clean sheet in five games. The two full-backs were excellent and I do hope Monreal gets the credit he deserves from certain fans because he’s been very, very good lately and he’s thoroughly deserving of his place ahead of Kieran Gibbs.

The centre-halves did what they do well, Ospina seems a calm, assured presence in goal and his distribution and handling was great all day (not to mention he had little to do but kept his concentration at the end of each half to keep his sheet clean), and the shielding job done by Francis Coquelin helps enormously.

Overall, a day of positives all round. Accusations – much as we knew already they were nonsense – that we were a one-man team were put to bed with five different goalscorers and an accomplished performance that didn’t dwindle in intensity even when we made changes with the game as good as won.

Walcott and Ozil continued their comebacks with tangible contributions, there was sensible in-game management in terms of how players like Giroud, Ramsey and Walcott were withdrawn, and this looks like a team that is finding some real confidence and belief and that’s being reflected in the performances.

All in all you couldn’t ask for better preparation for a North London derby next weekend, and that’s where the focus will be this week.

Meanwhile, today is transfer deadline day and for the first time in what seems like an age, there’s no pressure on us. We needed a centre-half this window, we’ve already got him. I don’t think we’ll be doing any business today other than perhaps letting some fringe youngsters go out on loan, but if we do you’ll find it over on Arseblog News today (there’s no live blog because I just don’t think anything’s going to happen to make that slog worthwhile).

There will be an Arsecast Extra later on, but it’s likely to be this evening before it’s released. Although we’re recording mid-afternoon, I’ve got something on which means I won’t be able to edit and upload it until closer to 6pm so you’ll have to be a bit patient. Normal service should resume next week when James is back from stalking Miley Cyrus.

In the meantime, just have a nice relaxing day enjoying the fine win yesterday. Check out some of the stuff on the video page and try and remember the last time we won 5-0.