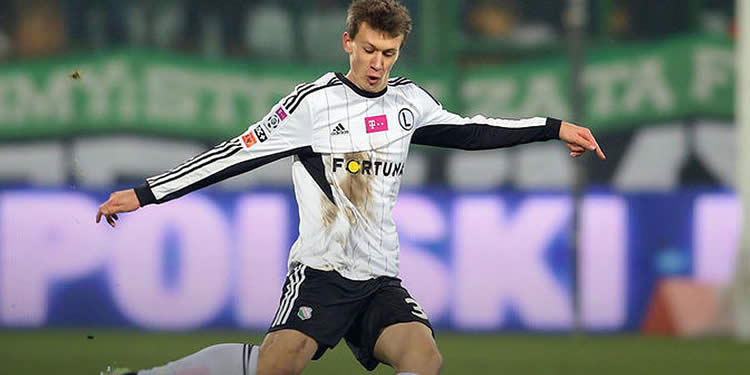 It’s early on a Saturday and the sky is kind of eerie at this time. It looks like the kind of slate grey you get in a Sci-Fi film when humans now live in ruins and basements and gigantic alien machines prowl the surface. I really hope there hasn’t been an overnight space coup because I’m going out with the dog soon so that would make things a bit awkward.

At his press conference yesterday Arsene Wenger confirmed the signing of Polish youngster Krystian Bielik, saying a fee had been agreed. The player completed a medical yesterday and will officially sign on Monday. What makes this stuff you already know a bit more interesting is that Bielik himself said he chose London to prove himself as a player but felt that he wasn’t yet ready for first team football, but it looks like the manager wants him ready as soon as possible.

He will go into the first-team squad. He’s a defensive midfielder, 6ft 2, he has a good energy level and technical level. It’s a gamble but, on what we saw, it’s worth to take the gamble. It’s an awful lot of money for a player if he doesn’t succeed. If he does succeed, then it’s cheap.

Before knickers get completely twisted, it’s worth pointing out there’s a distinction to be made between putting a player into the first team squad and into the first team itself. In the squad he’ll train with the first team, settle in, build relationships, and operate at a level that should improve him as a player. It doesn’t mean he’s going to face Man City on Sunday.

You might remember in January 2006 we made three signings: Abou Diaby, Emmanuel Adebayor and Theo Walcott from Southampton. The first two were used between January and May, but due to his tender years Theo had to wait until the following season to make his debut for us (despite being ludicrously called up to the England squad for that summer’s World Cup). The idea, obviously, was to get him ready for first team football by having him in the squad from the start.

Now, I can’t say for sure if that’s the manager’s idea with this kid, and we know he’s very much a proponent of the ‘If you’re good enough, you’re old enough’ thinking, but even with Arteta absent for three months he’s got Francis Coquelin and Mathieu Flamini who are likely to get the nod over him because of their experience. If he’s admitting it’s a gamble to even spend £2m on a 17 year old, it’s surely even more of a gamble to play him in games for which there’s little or no room for failure. Every point is precious this season.

That’s not to say further injuries won’t mean he has to be played at some point. When Flamini and Coquelin collide in training and are ruled out until 2019 each then we may well have to resort to throwing him in, but all going well I’d be hugely surprised if we saw very much of him beyond some substitute cameos between now and May.

Still, it does seem as if he’s one of the “one or two” players that the manager said he was targetting, and again he stressed his desire to sign a defender, saying:

We are out on the market and we work very hard every day. All our scouts, all our people are working very hard to find a defender.

And while I understand how the market operates, and the restrictions you have to deal with in January as the clubs you ideally want to buy from have no intention of letting their best players go, shouldn’t these scouts have been working every day from the end of August until the end of December and prepared a list of potential targets so we could get active in January? Maybe that’s just me being crazy and hoping things might be done in an optimal way, but there you go.

Certainly nothing is going to be done before Sunday and bar in-game injury I can live with that. If we’ve got Mertesacker and Koscielny, and one of Chambers or Bellerin for right back, then that’s not a bad situation to be in (leaving aside I’d much rather we had a fit Debuchy too).

But sometimes it feels like we’re skating on thin ice and when we get to thinnest part of the ice we jump up and down on it and throw rocks into it and shout “Come on then ice, break! I dare you!”, and at some point the ice is just gonna go “Well, you asked for it”, and then we’ll float along underneath it like that bloke from Omen II. We really don’t wanna be that guy, because the ‘DANGER: THIN ICE’ signs have been everywhere and if they’re simply ignored then you pretty much get what you deserve.

Early team news for tomorrow is that Kieran Gibbs will have a fitness test to see if he can make the bench because I’d stick with Monreal at left back anyway, while Ramsey, Ozil and Walcott are all available and a week fitter. Of the three only Ramsey is a likely starter with the other two kept in reserve on the bench – but what nice options they are to have should we need them.

More on that game in the full preview tomorrow, for now I’m going to venture outside. I’ll let you know if it’s safe. Have a good one.

ps – If you haven’t had a chance to listen to yesterday’s Arsecast, get it into ya here.