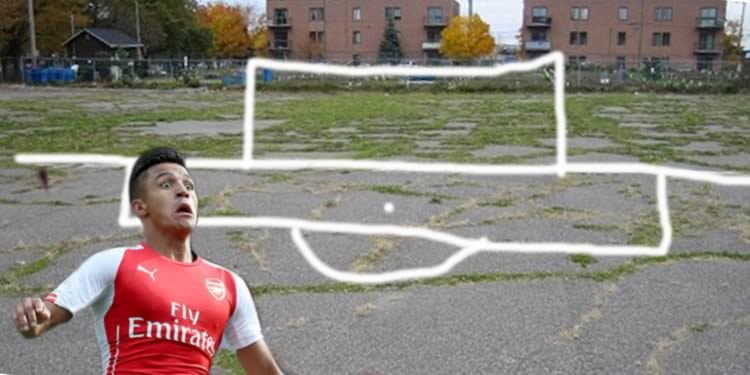 Sometimes dreams are mysterious. You don’t know what they mean and why your crippling self-doubt is manifesting itself in weird, cinematic experiences inside your head when you sleep.

Yesterday, and I’m very grateful for this – it’s not a complaint! – lots of people emailed or Tweeted me news about Stan Kroenke trying to move one of his teams (the St Louis Rams) to Los Angeles. While I don’t think this will have any real effect on us, I dreamed last night that he sold the Emirates to fund the new stadium in LA and the team were forced to train in Finsbury Park where they would routinely get into fights with an American Football team (made up of barmen and other ne’er-do-wells) who wanted to use the same space.

Our home games took place in a tiny schoolyard and the crowd was all around the walls and it was like Mad Max because opponents were being strangled by vociferous Gooners until the league said we weren’t allowed play there any more so we disbanded the football club and became an import/export business, selling useless microchips to Scandinavia.

Was it just a jumble of news that influenced my mind as I slept last night? Or is it some kind of vision of a Dystopian future based on the fact Kroenke’s malign moustache disturbs me? Behind such facial hair often lurks true evil. Look at Tom Selleck. Sure, he was great in Magnum but few people realise what a monster he is in real life. I heard he once put butter AND Bovril on toast rather than just Bovril.

Of course there’s the worry that a hands-on guy like Stan might get caught up in this new project and forget to give us the green light to spend big in this January window, but I can’t imagine things will get that bad that quickly. I’m sure that as soon as the window opens we’ll be splashing out like kings. Kings, I tell you.

After a win against Hull there’s not much in the way of news, other than the 4th round draw was made last night and we’ve got an away trip to Brighton as reward for our efforts on Sunday. We do have a recent history with them in this competition, a 3-2 win at their place in the 2012/13 competition when two goals from Olivier Giroud (one was very tasty if I recall) and one from Theo Walcott secured the win.

I also remember Andre Santos having a very Andre Santos day and, amazingly, Lukas Podolski played the full 90 minutes. Oh, things were different back then. By the way, Podolski’s loan move to Inter was finally confirmed yesterday.

Back to the FA Cup and the draw for the rest of the teams is interesting in that most of the ‘big’ clubs have been kept away from each other at this early stage. So Man Utd got Cambridge, Chelsea will play Milwall or Bradford, Man City have Middlesbrough and Liverpool face Bolton. Sp*rs have a replay against Burnley before they play Leicester, so assuming there are no shocks this season’s cup looks like it’s going to be a trickier one than last season.

In fairness to us, people moan about us scraping past Wigan and Hull to win it (a perfectly legitimate gripe, if you really want to complain about winning a trophy), without mentioning that we did for Sp*rs, Everton and Liverpool on the way to those games. Anyway, the Brighton game takes place at the end of this month.

Meanwhile, this morning’s Mirror touches on rumours about Wojciech Szczesny which have been doing the rounds for the last couple of days, and suggest he’s been fined £20,000 for sparking up in the showers after the 2-0 defeat to Southampton. I know there’s a lot to criticise the manager for these days but I’m fully behind his decision here.

Not only is smoking bad for you – especially if you’re a professional athlete who has just played like a gibbering poltroon after a night on the ether – it’s hugely wasteful to do it under running water.

“Why won’t this delicious baccy stick get on fire?”, said Szczesny as the water careered over his head and onto the Lucky Sztrike in question. He repeated this over and over until the entire pack was gone. I’d have fined him £40,000 for rank stupidity. Smoke where it’s dry, you fool. And then I’d have added on another £20,000 for being so profligate with his smokes in the first place. Doesn’t he realise there are boy soldiers all over the world who would love those cigarettes to dangle out of their mouths as they’re photographed in black and white with their AK47s for the cover of a magazine?

Silly boy. We’ll wait and see if this has any effect on the manager’s team selection for Saturday’s game against Stoke. Whatever about the daftness of his behaviour, I’m not yet convinced Ospina is the man to throw in against a team like that.

Finally, if you haven’t had a chance to listen to this week’s Arsecast Extra, get your ears around it here. We discuss Alexis, Theo, Coquelin, Szczesny and loads more and I apologise in advance for the disturbing imagery at the end of the show. Nothing can bleach it from my mind.