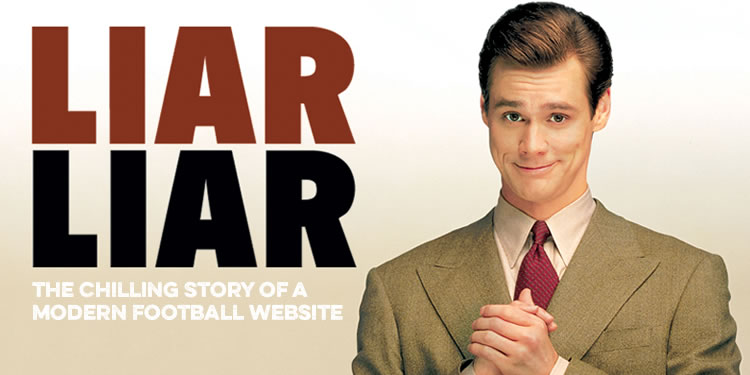 January. What a month. As TS Eliot once said, “January is a time for Brigadoons, rapscallions and the kind of man that would fart in an elevator and look at you to shift the blame.”

He knew what he was talking about. It’s an exhausting month, what with the getting up early and the fresh invigoration of New Year resolutions. For example, I have been getting up super-early and bringing the dog for a walk but this morning, because I played football at 8pm last night, my body was having none of it when my alarm went off.

It’s just one specific injury in fairness: I have strained my limbs, torso, extremities and organs, but apart from that I’m all right. The recovery time at 43 is not what it was once was, and it was never up to much to begin with. So, after an extra hour in bed (it’s now 7.01am as I write), I got up, made coffee and went upstairs to my office.

Turn computer on, listen to the Mac bonnnnnggg, open up browser, open up WordPress, click ‘add new post’, decide to see what’s been stirring overnight on the old NewsNow and this is the first thing I see:

No they don’t. They really don’t. Anybody who knows anything about football, and even those that don’t, understand that this is complete nonsense. Arsenal are not preparing a £64m bid for Isco. I mean, he’s a very good player and I like him a lot, but even by Arsene Wenger’s slightly obsessive standards – at some point in the future they’ll discover a room at his house packed full of diminutive attacking midfielders just waiting for their chance – this is nonsensical.

This is January. The Telegraph have farted in the lift and they’re looking around trying to blame it on somebody else because in the copy of the article which I clicked on (I know! I know!) they say the story emanates from the Star. In much the same way that pus and green goo emanates from an infected wound, I guess.

The thing about these ‘Transfer rumour’ columns is that it gives the supposedly respectable press the chance to print stuff which they know is complete and utter bollocks, but which they also know is of great interest to people. Clicks and eyeballs, don’t you know. There doesn’t have to be a shred of evidence for any of it, and because you stick a bit ‘Transfer rumours’ headline on the top there isn’t even the expectation of truth. It’s the handy get out card that works for all occasions! You can even use Caught Offside as a source.

It should just be called HOUSE OF LIES or the DOMINION OF DECEPTION. At least add a little drama to proceedings. And wouldn’t it be fun to see them apply this to other areas of the news, not just football? What’s good for the 11-a-side goose and all that. Think of the larks they could have.

Ludicrous, right? But not anywhere near as unbelievable a story than Arsenal might spend £64m on Isco. Especially that last one. And the second one. The first one we’re pushing the boundaries a bit, I’ll grant you that.

And if people complained they could say ‘Ahh, it’s just the news and current affairs. Don’t take it so seriously. None of it matters anyway”, which is probably true because only Russell Brand knows what the news is these days and I’m fucked if I’m going to sit down at 6pm every evening and have him read it to me. He’s no Moira Stewart, let me tell you.

Sometimes though, there’s some transfer news that does have some fact in it, but it’s generally more boring than £64m for Isco. Like, for example, the news yesterday that our bid for 17 year old Polish midfielder Krystian Bielik had been rejected by Legia Warsaw.

In typical Arsenal style, as we all cry out for a DM of genuine quality who can crunch his way through the Premier League, as well as a central-defender of any shape or size that might ease the burden on Laurent’s screaming Achilles tendons, we’re doing a deal for a teenager who won’t be ready for first team action.

Yet complaining about this seems to me a bit like complaining that the sun comes up every morning. That’s just what it does and this is just what we do. Remember that glorious time when we needed some players, as we always do, and then we went out and bought Thomas Eisfeld and everyone was so desperate we thought he could even be the next Marco Reus but now he’s playing for Fulham in the Championship where he has made 9 appearances and scored a grand total of 0 goals which exactly the same amount of Championship goals I’ve scored this season? What a coincidence.

I see, and read, people saying, “Oh God, it’s going to be the same, isn’t it? A month of ‘We must buy, we can’t not buy anyone!’ and then on January 31st we bring in a 38 year old with a stump for a leg from Grenoble Town on loan who we immediately make captain”.

Well, those people couldn’t be more wrong because the transfer window is open until February 2nd this year, so you’ll have to wait an extra few days for Jaques le Stump to lead us to Premier League glory.

Meanwhile, Bordeaux say they’re waiting on Arsenal to make a decision on Yaya Sanogo. They want him, he wants them, but Arsene Wenger wants him to go on loan to another Premier League club. While that would probably be the ideal solution, surely the best thing is for him to get first team football anywhere at all and if it’s on offer from France then so be it.

As Marouane Chamakh so perfectly illustrated, Bordeaux is ideal preparation for the rigours of English football.

ps – Not content with doing it once, the Telegraph has republished the Isco story with a slightly different headline so it gets another outing on NewsNow and all the other aggregators. Clicks and eyeballs, clicks and eyeballs.