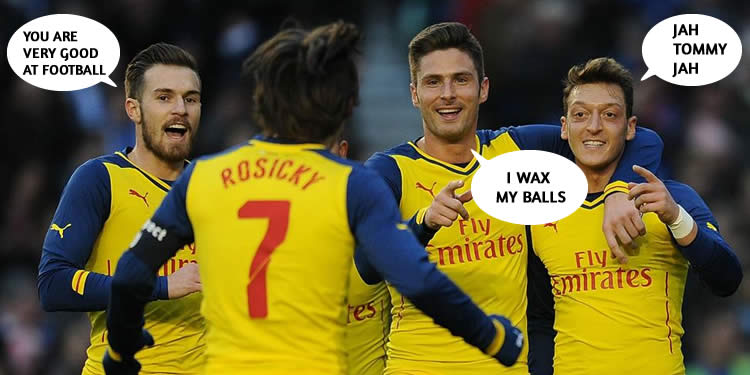 In the last two games we’ve been treated to wins (always nice), but also virtuoso performances by individual players. Against Man City last weekend Santi Cazorla ran the show, yesterday it was the evergreen Tomas Rosicky.

He’s 34 years of age but zips around the pitch like a teenager, chasing, harrying, pressing, and making life uncomfortable for the opposition when we don’t have the ball. And when we do have it he’s got one thing on his mind and that’s to go forward and make something happen. That he still has the burst of pace to drive past defenders almost half his age is a testament to … er … his legs, but also his professionalism and conditioning.

Yesterday he was just outstanding. It’ll be a match remembered on paper for his goal and his assist, but he did a lot more than that. You almost wonder if Arsene Wenger kept him in reserve for the second half of the season on purpose. At times he made it clear he wasn’t happy with not playing but said he’d wait for his chance. When the chances have arrived in recent weeks, he’s taken them and in some style.

Take his goal yesterday, to make it 3-1. He won the ball back high up the pitch, gave the defender the eyes, make a no-look pass in a different direction which allowed Giroud the space to chip it back to the edge of the box, at which point he just volleyed it home before raising his arms like a little footballing Rocky Balboa at the top of the Philadelphia steps. As Zonal Marking put it so well:

In the first half he could have scored had Theo Walcott spotted the run he’d made, but showed his vision with a great assist for Mesut Ozil. Given way too much time in midfield by Brighton, he turned inside, spotted the German in the box and picked him out with a fizzing pass knowing Ozil had the quality to make the right touches and finish.

He’s often a player taken off when he starts – not yesterday. He was too important. It would have been like a waiter taking your plate away as you’re halfway through a steak. Late on, as we sought to close the game out, Rosicky provided those moments of calm and experience you need, keeping the ball, bringing it into areas from which they couldn’t hurt us – as well as creating a great chance for Ramsey to put the game out of sight in the last couple of minutes.

He was man of the match by a long, long way, and as much as anything else an example to other players who should follow his lead in terms of how he plays the game and his attitude towards it. Make every minute on the pitch count for something.

The supporting cast weren’t bad, but not up to his level. While the 2nd minute goal will have done Theo Walcott some good (and what a tasty finish it was too), his rustiness after so long out was apparent. Twice he had the simple task of playing a pass outside him into the box for players who had made a huge effort to get into those positions, but he dallied and the chances went begging.

I think it’s clear at this point that Walcott is a player who will get you goals as an instinctive finisher and pacy outlet, rather than a genuine creative winger, but he should have done better in those situations. Hopefully more game time will improve that though, and getting his first goal since Jan 1st 2014 might take away some of the pressure he’s feeling to produce.

Mesut Ozil’s goal was also very welcome and I thought he had a solid outing overall. His relaxed ability on the ball is very welcome, he didn’t shirk his defensive responsibilities, and even though he was on the left hand side (supposedly Ozilian Kryptonite) he still made a good contribution.

Where we might be a little less happy is with some of the defending. Chambers, despite a fine assist, showed his inexperience for the first and I’m not sure Flamini and Koscielny were masters of that situation either. The defender wasn’t great for their second either and while I’ve seen some criticism of Szczesny for both goals I don’t really understand it.

The first went through players legs and just inside the post, leaving him no chance, and the second was a one on one which you would expect any half-decent player to score, so I’m not really sure what he was supposed to do in either case. Nevertheless, it wasn’t a performance which will have done anything to change the manager’s mind and I fully expect Ospina to start the next league game – unless there’s an injury problem.

Afterwards, the manager was full of praise for Rosicky, and said of the performance in general:

As a game, it wasn’t anywhere near as tight as the scoreline suggested, but all it would have taken is one further lapse in concentration for us to be facing a replay, so it’s not something we should ignore. I think the point about scoring more is a good one, but the first focus should be on better defending.

After the shocks inflicted on Chelsea, Sp*rs and Man City this weekend, we made sure we didn’t join them in the Laughter Lounge. The Hilarity Hotel. The Mirth Motel. The … I’ll stop now. We did what we had to do, we’re through to the next round, and it’s worth noting that this win made it the first time this season we’ve won 4 games in a row. Dare we suggest we’re building a little bit of momentum?

Meanwhile, Arsene said that he expects the signing of Gabriel from Villarreal to go through today. He had this to say about the Brazilian:

He is 24 years old, good size, good pace, he is a good defender. He’s only played one year in Europe, so maybe there are some things to work on, but the potential is there.

And on the work permit issue which has people worried:

We will be all right on that front.

Which suggests we’ve got the nod from somewhere or someone, so that’s good news. He’ll be arriving to complete a medical and all the other formalities, and while it might take him a little bit of time to settle, it’s good news that the defensive depth we’ve lacked all season has been addressed and hopefully the knock-on effects of having genuine competition at centre-half are felt too.

Right, that’s about that for this morning. There will be an Arsecast Extra but not until this afternoon as James is still out Californee way and we’ve got time zones to deal with. Questions still welcome to both @gunnerblog and @arseblog on Twitter with the hashtag #arsecastextra but you’re better off waiting until later to send them so they’re not lost in the mix.