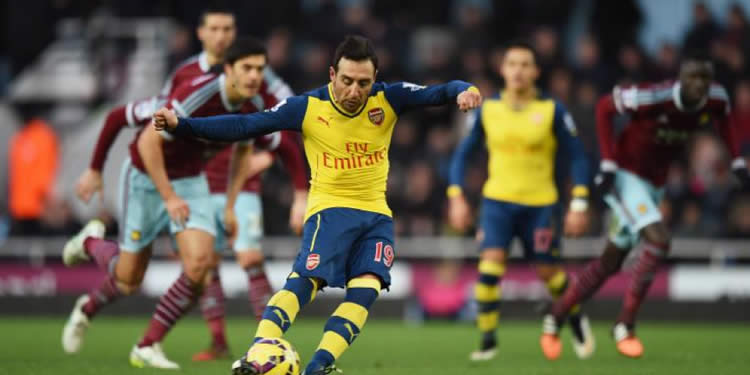 A second 2-1 win inside 48 hours made it 6 festive points from 6 so far, and there was plenty to be encouraged about in yesterday’s performance.

Despite the absence of so many midfield and attacking options, there was some genuine verve about us, particularly in the second half, and but for their keeper and some poor finishing/decision making on our part, the game would have been out of sight of the Hammers.

That said, we rode our luck a bit at times, but for the most part I think we got the result we deserved. West Ham set their stall out early with a deep, high cross into our box inside the first minute. Our response was for Wojciech Szczesny to come and claim it with real authority, something he did throughout the game. The witless Tony Gale, co-commentating, suggested it was down to the poor quality of the balls they were putting in; in reality it was good goalkeeping because even when they varied the delivery he kept coming and kept winning it.

They were better than us in the first half, buoyed by a loud home crowd bristling with Russel Brandian levels of indignation after Alex Song’s ‘goal’ was disallowed. It’s rare that you get decisions like that, and I’m not sure Szczesny was getting there anyway, but there were two players right in front of him and impeding his view – the very definition of being ‘active’.

As for Song’s decision not to celebrate, you have to laugh. It’s a nonsensical idea that just because you played for a club you can’t celebrate a goal against them. Maybe, at a push, somebody like Thierry or Dennis you could understand, but Alex Song? Hilariously that ‘respect’ didn’t stop him protesting like mad when it was disallowed. Make your mind up fella.

There was another golden chance for Tomkins at the back post before we started to get into the game a bit, and when Santi Cazorla was brought down in the box the Spaniard made no mistake in a) letting Alexis take it or b) with the spot-kick itself. It’s also worth having a laugh at Winston Reid who went bananas, as if there was some doubt as to whether it was even a foul, when replays showed him doing the trippiest trip of all time to concede the penalty.

With West Ham rocking we got a second. Good combination play between Oxlade-Chamberlain and Debuchy saw the winger hit the byline, and pull it back for Danny Welbeck who poked home his first goal since the winner at West Brom at the end of last month.

The last thing we needed was an early West Ham goal in the second half so, obviously, that’s exactly what we got. We got caught ball watching a bit as a corner was cleared, Tomkins crossed, Kouyate got above Debuchy and his header bompled off the Frenchman’s head and into the net.

If there was a fear this would put us on the back foot it was nice to see it was unfounded because our response was immediate, Cazorla forcing Adrian into a save which the keeper didn’t know too much about as the ball ricocheted off the underside of his arm. Most of the time those go in.

There were other good chances for Alexis, a toe-poke saved at the near post; Welbeck’s storming run and shot deserved more; Welbeck again picking up a loose pass but shooting over; Alexis crossed for Oxlade-Chamberlain who headed straight at the keeper; and when Cazorla sent the Ox storming down the right, he had the Chilean inside for a tap-in but shot wide instead.

It felt like our profligacy in front of goal would cost us. That’s the kind of fatalism we endure as football fans. ‘All those chances and they score a last minute equaliser!’, but despite them sending the keeper up for set-pieces, which we dealt with well defensively for the most part, we saw it out. Perhaps a bit of a luck again at the end when Valencia headed over when he really should have scored, but so it goes. Their missed chances proved more costly than ours.

Afterwards, the manager spoke about wanting to play two deep-lying midfielders against Allardyce’s team and praised the physical effort to play twice in such a short period of time:

We knew before the game that we had to dig deep to win because we were a bit jaded but we did that. We had a united, combative and very solid performance. We are questioned a lot about our physicality and we had a good opportunity to show that we could do it – and we did it in a very convincing way.

Bar only one moment I can think of, we handled Andy Carroll very well. He was a challenge for Mertesacker and Koscielny, but one they came through well. It was also good to see their partnership back in action because despite all the recent criticism it’s one of the best in the Premier League. We still have to find a working solution when one or the other of them is not fit, but when they’re together, and flanked by the experienced full backs, it’s no coincidence we look better at the back.

As I mentioned at the start I thought the goalkeeper was superb; big, strong and decisive against a team and a crowd who would thrive off fumbles and moments of insecurity. Santi Cazorla’s sparkling form continued, Welbeck put in a hell of a shift up front (needs to work more on his finishing though), and in midfield Francis Coquelin did a good job under the circumstances.

When a manager lends you to Freiburg and then Charlton, you don’t need to be a genius to read into what it means, but hauled back because of an emergency he played well yesterday and even if his own long-term future looks to be elsewhere, surely what he brought to the team is evidence that a player of his ilk is something that could really benefit the team.

Anyway, it’s so far so good this week and now the players have to get rested and ready for a different, but equally difficult trip to Southampton on New Year’s Day.

All of which should make for good festive listening for this morning’s Arsecast Extra. Join James and I a bit later this morning and as always we’re taking your questions on Twitter to @gunnerblog and @arseblog with the hashtag #arsecastextra.

We’ll have news throughout the day over on Arseblog News, more from me tomorrow. Until then, have a good one.