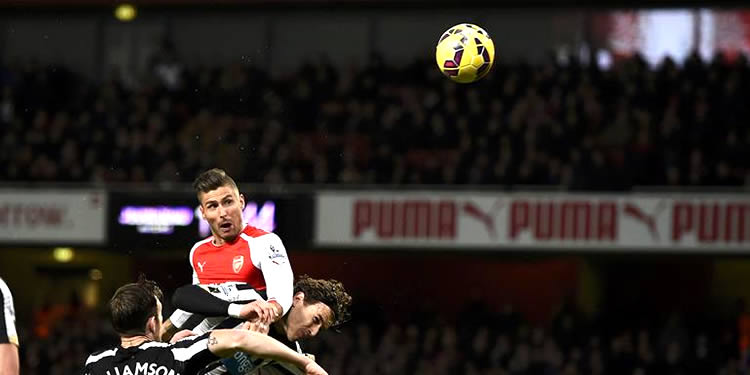 I realise that’s just a metaphor for the inexperience of the line-up and I’m actually doing them a disservice. Mathieu Debuchy played his first game in central defence and looked a good foil for Per, while at right full the speedy, be-quiffed Hector Bellerin had what you’d like to think was something of a breakthrough performance. Granted, they weren’t hugely tested by a Newcastle side that beat Chelsea last week, but all you can do is all you need to do, and they did that for the most part.

The game was more about our goals than the defenders, however Bellerin’s nippy interception began the move for the first. He nicked it away from one of their players, Giroud fed Alexis down the right, kept running and when the Chilean put in the cross the HFB rose like Leapy O’Toole to thunder home a header into the top corner. Last week he missed one from 2 inches but that goal yesterday was everything you want from a header. The power, the leapiness, the fact he looked at the ball like an old enemy and just loafed it into the net. Magic.

Although we had to wait until the second half for our next strike, we had Wojciech Szczesny to thank for keeping the lead intact. Our keeper has had a difficult enough season behind various defences of differing solidity and one of the complaints was that he hasn’t been making saves that win points. He did that with an excellent double stop from a free kick and a rebound. There was still a long way to go but our confidence is so brittle that being pegged back might well have changed the complexion of the game.

Instead it meant that when Cazorla put us 2-0 up a few minutes into the second period we had some breathing room. And what a goal it was too. Alexis spotted his darting run into the box and fizzed in a pass to feet which the Spaniard controlled as he rode a challenge that could easily have brought a penalty, and when the keeper rushed out he just chipped the ball back across him into inside of the net. Could it be that the Santi we have all been missing is, perhaps, on his way back? His first goal this season was in the Community Shield, his next came 22 games later against Stoke and now he three in his last two.

One of the things I enjoyed greatly about yesterday was the decisiveness of Alain Pardieux’s substitutions when they went 2-0 down. ‘That’s enough of that old shit!’, he said hauling off two chaps and engaging the services of a different duo. ‘This will have the required impact and my lads will get back into the game!’, he thought to himself and then Arsenal scored immediately.

Bellerin’s energy down the right was fantastic, the ball was fed to him, he lashed in a low cross to the near post where Giroud’s touch was superb. Using the pace of the ball he just dabbed a big toe at it, let it roll off his foot and boof, goal, where it did that awesome thing of rolling around all over the roof of the net before touching the ground. It was the finishing equivalent of the Vulcan Nerve Pinch – just light enough to do what was required but the outcome is deadly (sort of).

That they scored soon after shouldn’t be a surprise to anyone. I think it was Hector who failed to mark Perez and his header flicked into the far corner giving the keeper no chance, but it never felt to me like another Anderlecht. That night you could sense something was really wrong. The kind of wrong where you’re battling a dose of the splats while teaching a class full of unforgiving teenagers as you wear white pants. Last night just didn’t have that for me and we could have gone further ahead rather than get pulled back. Gibbs rolled a volley wide, Santi hit the side-netting and Newcastle’s only danger came from set-pieces which we dealt with well.

Late on, just after the manager had put his Coq on, the game was put out of sight when Welbeck was felled in the box, Santi stepped up and chipped the penalty down the middle. If there’s been some negative reaction to it from certain quarters I would advise you to ignore it because, basically, life is just too short to worry about what people that stupid think of anything, let alone a goal in a game of football. It capped a fine performance and a very enjoyable win. It’s not often you win 4-1 twice in a week, and this week in particular it feels especially welcome.

Overall it was a dynamic game where defensively – despite the fact that we were depleted at the back – we were quite solid. Going forward we always looked dangerous. In the end we won in a convincing way. We scored four goals and that was needed. The response was strong after the Stoke City game and let’s go well over Christmas.

Obviously the win was hugely important after what happened last weekend, and without so many first team players there’s a lot to enjoy. We had a right-full at centre-half, an attacking midfielder/winger in the centre of midfield alongside Flamini, and not much in the way of options to change things on the bench if we needed to, so it was good to see the players we had do what was necessary.

I think there’s something very interesting about that front three we fielded too. It’s still very early days for them as a unit, and there are players in the squad who will want to break into the side in one of the positions, but Giroud, Welbeck and Alexis do seem to work well together. It feels balanced and effective, the versatility of the latter two dovetailing nicely with the Frenchman as the focal point of the attack. It’s too soon to make any kind of definitive judgement but you get the sense that’s a trio with a lot of goals in them.

I also liked the fact that the goalscoring reliance on Alexis was offset by the strikes from Giroud and Cazorla. It’s about time some of the others helped shoulder the burden – but isn’t it just typical of the Chilean that he looked absolutely gutted to be taken off with just a few minutes to go. He surely knows deep down it was a sensible move under all the circumstances we could mention, but he looked crestfallen because he just loves to play and probably wanted to score so much. He’ll have to content himself with just the two assists, I guess.

Overall, a good day for us. So much so that I’m only going to mention another very poor refereeing performance in passing. Lee Mason was bad. I was worried that he might cost us but thankfully we had the quality to overcome the opposition and his odd decision making.