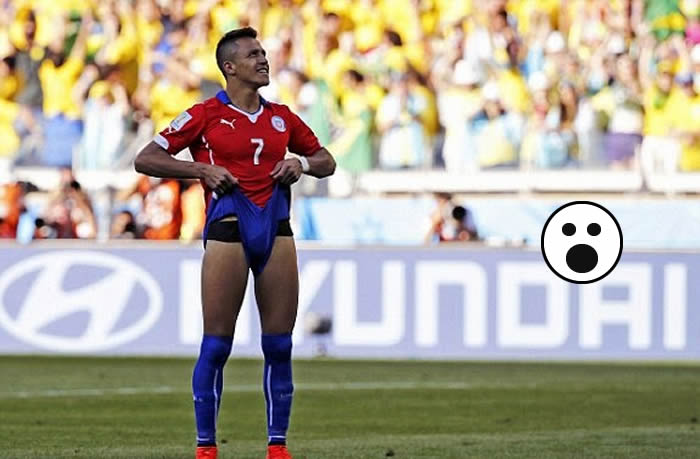 When the biggest headline of the morning is about Arsenal finding a new commercial partner (this time for beer), you know it’s a slow one.

As much as I’m a fan of beer, it doesn’t lend itself to too much in the way of blog fodder. Today, I believe, is Member’s Day, so there’s an open training session and various high junks at stadium. I know that should read ‘jinks’, but maybe one of the special events is the players going through large piles of scrap to see who can salvage the most valuable items.

“I believe this is an 18th century brass nipple clamp!”

“No Theo, it’s a door knob from a Barratt Home”

An interesting question posed to us yesterday on the Arsecast Extra asked if this summer could be considered one of progress, given that most of the business we’ve done is replacing departures. Goalkeeper out, goalkeeper in; Sagna and Jenkinson out, Debuchy and Chambers in; and Sanchez aside, it’s hardly progress (according to the listener’s question).

As James quite rightly pointed out, suggesting that you can leave Alexis aside is a bit convenient, simply because he’s a £30m signing specifically designed to add lots of qualities that were missing from our attack. A man who can play wide left or right, through the centre as a striker, or through the centre with a striker. Pace, power, strength, goals, he brings a lot to our team.

But on paper you can sort of see how that question works. The other I was emailed by Przemysław (whose name I couldn’t say on the Arsecast), with this image about how we could fashion two teams from our current squad – I think it originated on r/gunners but happy to credit the original source if it’s from elsewhere, just let me know): 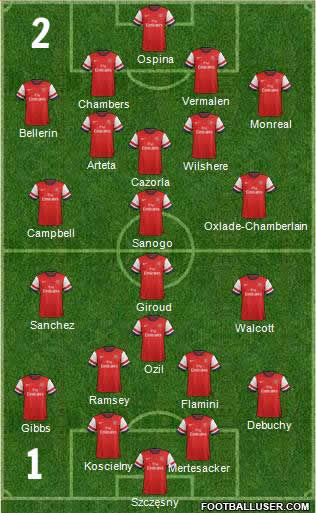 Also, excluded from those two teams are Rosicky, Podolski, Diaby and Gnabry, so I don’t think there’s an issue of depth in our squad. Accepting that Vermaelen will leave, and likely replaced by a signing, as well as the fact that it seems the club are still in the market for a player or two before the transfer window closes, and we could have as strong a squad as I can remember for quite some time.

Which brings me back to the question on the Arsecast as to whether or not this is a summer in which progress has been made, and my contention is that you can’t just put it down to the business we’ve done. You can look at all those players – and everyone has their favourites – and wonder how we might fit them all in over the course of the season. Is there going to be enough football for some of them?

And I think that comes back to the perception of these players which has changed since we won the FA Cup in May. Had we not done that, I think there’d be a lot more cynicism about the players, certainly some of them would be considered more expendable than they are now because they’re part of another generation which failed to win silverware.

Instead we have players who won not just the cup, but the slayed the ‘How long has it been’ dragon which was practically an opponent in itself. That dragon was disguised as a monkey and now that monkey is no longer on our back and that’s good because trying to play with a dragon sized monkey clinging to your scapula is not much fun.

As well as that, there’s the boost you get from winning something. The belief, the confidence, the knowledge that you can go the distance, lift the cup, wear the medal – and it’s part of the intangibles that are part and parcel of how any football team performs. We’ve heard the manager talk many times about confidence is the hardest thing to gain but the easiest thing to lose in the game.

With what happened at Wembley in May on top of the what the club have done this summer – signing good players with alacrity and little or none of the hassle that has come with some of our more protracted business – it just adds to the feeling that we’re moving in the right direction.

Of course, I think any squad is open to improvement, and I do believe that there are still some irons in the fire in that regard. With the numbers we have right now, however, it allows us to play the transfer game a bit more, and we know how much Arsene loves the brinksmanship and the negotiating that can be done as the window draws to a close.

Only the World Cup and the late arrival of some of our players slightly dents the positivity summer for me, but then there’s nothing at all we can do about that. The club are obligated to give them a specific amount of holiday time based on their progress in the tournament and with both Per Mertesacker and Mesut Ozil key members of our first 11, that’s something we’re just going to have to cope with until they get up to speed.

So, for me, this has been a summer of progress as last season was one in which we made progress too. We seem to have taken that into the transfer market and could do more before the end of August. The challenge now is fitness and readiness, but even that is an area in which we’ve brought in new people to make us better. So far, so good – at least until we start kicking a ball again!

If you didn’t get a chance to listen to the Arsecast Extra, you can find it here. The question above, and others about Flamini, Arteta, the starting line-up for the Emirates Cup and loads more are on the agenda. Do it.

Right, places to go, people to see, voice-overs to do (and if you’re ever in need, I’m always open to a nixer here or there).