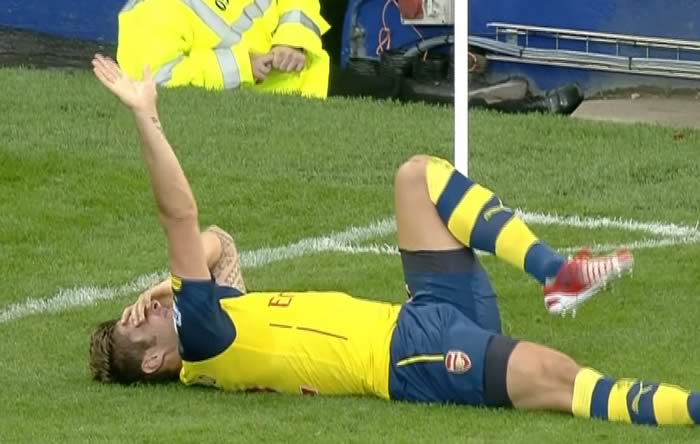 A rather inauspicious start to the morning comes with the news – as yet not officially confirmed – that Olivier Giroud faces an extended period on the sidelines with a broken foot.

L’Equipe journalist Bruno Constant Tweeted the news last night and the story has been carried in most of the papers this morning, the suggestion being that he could be out for as long as three months. Here’s the injury as it happened. Looks inoccuous, as is often the case, but if the worst fears are realised it’s a real blow.

Now, obviously that’s bad news in the short-term, because we’re without our best centre-forward for tomorrow night’s game against Besiktas, but also in the medium-term because we’re without him for a period which places huge pressure on certain players who may not be ready to deal with that.

It raises questions now about whether or not we should let Lukas Podolski leave the club, and also means the manager is going to have to seriously consider dipping into the transfer market to find the kind of replacement that a title-chasing team should have.

With all due respect to Yaya Sanogo and Joel Campbell, I’m not convinced they’ve yet got what it takes to score the goals we need (and Campbell, to my mind, is not really a natural replacement, having played most of his career in the wide areas). As for Podolski, he would give us depth but again the times we’ve played him as a centre-forward haven’t exactly suggested that’s his best position.

The injury to Giroud really shouldn’t impact on what our plans with Podolski are anyway. He’s a wide forward in this team, not a central striker, and if the manager has decided to move him on it’s because he feels like he has better options there (or is about to replace him with one). I suspect it might delay, rather than prevent, the inevitable.

Giroud isn’t ever going to be the World Class striker people want but he plays a very important role in the team and the way it plays. The manager is obviously open to trying something new, as he showed in using Alexis there on Saturday, but that will surely mean a period where the team has to get used to it. The first half against Everton showed we’re a long way from understanding that system and we’re much better in the second half when Giroud came on.

Regular readers will know that I’m not down at all with this blessing in disguise nonsense that people come out with when a player they don’t really like is injured, but if there’s any kind of silver lining to this it’s that the injury has come while we still have a chance to do something about it. The transfer window closes next Monday night at 11pm, and between now and then we ought to be moving heaven and earth to find the best possible striker we can.

Names like Remy and Welbeck have been suggested in the immediate aftermath of this news, but it strikes me they’re just the obvious candidates and easy for the press to put forward. The trouble is, there does appear to be real dearth of genuine and available striking talent out there right now. It was a question posed to us on the Arsecast Extra yesterday: who is the striker we could bring in?

The conclusion we came to is that we’d be much more likely to sign a player who has the potential to be a top forward in a couple of years rather than an established one now. There’s an inherent risk in that because you’re banking on a player fulfilling his potential and much can happen. He might look like the arch-poacher you need and then some wanker in a Birmingham shirt snaps his leg in two and he’s never the same again.

To be fair, that conclusion was reached without the knowledge of how serious Giroud’s injury was, so maybe that will inform the manager’s decision making between now and Monday night. But to my mind, a striker purchase is now an absolute necessity if the three month time spell is confirmed. As for who – well that’s anybody’s guess. Cavani, Falcao? Doubt it. Bony? Could see that, but you just can’t second guess Arsene Wenger in the transfer market. I know we have targets, we might have to really push the boat out to get the one we want, but at this point we’re not in a position to bargain.

The manager will meet the press today ahead of tomorrow night’s Champions League qualifier, so we should get official confirmation one way or the other. With the focus on the game, any moves in the market won’t take place until after Wednesday, and even those might well be affected by how it goes against Besiktas. Win, and the lure of Champions League football will make the recruitment job easier. The alternative isn’t really something I want to contemplate but what was already a difficult task has become even more so with Giroud’s absence.

It’s most certainly not ideal preparation for tomorrow night but all we can do is be thankful that we have the opportunity to react. Nor should it obscure the fact that other signings are needed between now and Monday night too. The defensive situation is still worrying, there’s not enough depth there for an entire season, and even though the Portuguese press say we’re in talks with Sporting over William Carvalho, I’m not entirely convinced that’s an area the manager is prioritising.

The early part of the summer, and our recruitment in that period, went very well and left most people satisfied about the state of the squad at that point. Now, however, it’s impossible not to think that the next six days will be absolutely crucial if we really do want to build a squad that can win the league and challenge in all competitions. Make the right moves and we’re in business. If we don’t, it’s difficult to see us achieving much more than the usual.

Over to you, Arsene and Ivan.