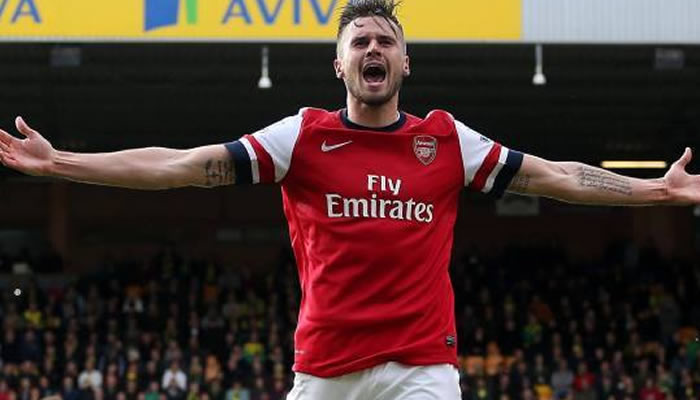 Hurrah, it’s Friday, and it’s a bank holiday weekend here. Just what I need to ease back into the pace, and wetness, of Irish life.

It seems pretty quiet this morning although the big story is the not unexpected news that Carl Jenkinson has been shipped off on loan to West Ham. After adding Mathieu Debuchy and Calum Chambers in the last few weeks, his chances of first team football would have been pretty slim, so it’s a move that makes sense on a number of levels.

Of course many will ask whether or not this is the end of his Arsenal career, and I don’t think it’s an unreasonable question. When a player of his age goes out on loan, it’s usually not for developmental purposes, but in this case there might just be something to that.

Debuchy is not going to be a long-term signing given that he’s 29 years of age, and even if Chambers becomes the next right back in the future, decent back-up is still required. The club had enough faith in Jenkinson to give him a five year deal back in December 2012, and it’s not as if he’s actually performed badly at any point.

When asked to deputise for Bacary Sagna when he was absent through injury, I thought he acquitted himself pretty well. Sure, the early months of his Arsenal career were something of a struggle, but then you ask any kid to make the step up from Charlton in a team that was ramshackle after a dreadful summer and I think they’d find it hard going. And if he didn’t play regularly it’s because he had somebody as good as Sagna ahead of him throughout the majority of last season.

So, a year at West Ham, playing regular football, might well be a chance for him to prove he’s got what it takes to be an Arsenal player in the future. If he does improve aspects of his game – and it’s usually only playing often that does that – we could see him in red and white again.

There’s no doubting his commitment to the cause, what with his Arsenal bedspreads and that, but even if he doesn’t cut the mustard and has to continue his football life elsewhere, I can imagine seeing him in an Arsenal shirt once more. That it’s in an imaginary scenario when he scores the goal against Sp*rs that relegates them at White Hart Lane on the final day of the season and he rips off whatever shirt he’s wearing to display a ‘HAHAHAHAHA 61’ Arsenal one makes little difference at this stage.

Anyway, good luck to him under the tutelage of Sam Allardyce who, I was reading yesterday, is being tasked with playing more attacking, adventurous football by West Ham’s owners. It’s a bit like asking a walrus to becomes the swiftest, most efficient predator in the Serengeti, but hey, I’m sure it’ll be fun to watch for all concerned.

I think we also ought to point out that it’s probably a sad day for Carl Jenkinson’s dad who is probably writing another pop classic about this very situation:

Meanwhile, in other news, Atletico Madrid say they’re not interested in signing Santi Cazorla this summer, having been linked with the former Villarreal man for most of the close season. Their president says:

Many names have been mentioned, but none of those players, neither Cazorla, Callejon, Torres nor Chicharito  are on our agenda.

My podcast colleague, Gunnerblog, reported that Cazorla’s agent was in London yesterday, but whether that was on Cazorla business, or something else entirely, is unclear right now. I have to say I’d be surprised if he were to leave this summer, but could easily see him return to Spain at the end of this new season. Hopefully with a medal or two in his back pocket.

Finally for today, it’s been well reported that Arsenal have brought on board American fitness coach, Shad Forsythe (can he put an end to our injury saga? One for the oldies there). He’s been working with the German national team for a long time, and is already working with our players.

With the fitness and injury issues we’ve had down the years, it’s good to see us address this at a very functional level. Whether he’s the miracle worker some people want him to be will be evident throughout the campaign, but hopefully he can have a positive effect because the margins are small and every advantage we can get makes a difference.

In an article on Arseblog News, Aaron Eshref looks at Shad Forsythe and his methods, and how he might have an impact behind the scenes. Well worth a few minutes of your time.

Right, that’s that. We’ll have an Arsecast Extra for you later on this afternoon so stay tuned for that.

ps – am still catching up on emails etc since the trip, so bear with me if you’re waiting on a reply.