I definitely fancied the Germans to win, but I didn’t expect anything quite like that. Without the suspended Thiago Silva, the hosts were ramshackle and disorganised at the back, and without Neymar they had nothing at all to trouble Germany up front. However, the loss of two players shouldn’t bring about that kind of display.

Whether it was the pressure, the expectation, or what, I don’t know, but Brazil folded like a house of cards and their opponents were ruthless, efficient and merciless. Having gone ahead through Thomas Muller in the 11th minute, Germany then scored four goals in six minutes to lead 5-0 at the half-hour mark.

Some of that was down to excellent German play, but a lot of it was down to plain awful Brazilian marking, or lack of marking, along with an inability to do the very basics. It had always felt as if Brazil struggled to get to this point in the first place, and their shortcomings were exposed time and again by Jogi Low’s side. Careless in possession, positionally awful and lacking in any kind of character, they found Germany in no mood to take their foot off the gas.

It was 7-0 with just a few minutes to go, Mesut Ozil’s miss saw Brazil got up the other end and score a consolation, but it had got to the point where the home fans, beyond distraught at that point, had been Olé-ing periods of German possession. I’d like to say I’ve never seen anything like it (the blitz of goals in the first half did put me in mind of something that happened recently … can’t quite remember what … *cough* …), but not on this stage and at this point of a World Cup.

Still, however bad Brazil were, you have to give most of the credit to Germany who were just fantastic. Teams often play badly but don’t get spanked like that, and the reason they did was great build-up play, cool finishing and hard work from a team that worked together brilliantly. I think it was the one that made if 4-0 when they just pressed the Brazilians from the kick-off, won the ball back easily and sliced them open for a casually brilliant goal.

Ozil started the game and I thought he played pretty well, made an assist, contributed well overall, and although he should have scored late on, he had a positive game. I saw late last night on Twitter that the Mail had chosen to ignore the overall narrative of Brazil being spanked 7-1 at home by a fantastic German side to single Ozil out for criticism.

Here’s the thing: there’s only one reason for them to write a piece like that, and it’s to spark a furious reaction. People will say ‘Look at this shit written by a twat!’, and will send the link to people who will click the link and send it onto their friends saying ‘Look at this shit written by a twat!’. And thus the article does exactly what it set out to do. It’s like the shock-jock of print, designed to wind people up but by allowing themselves to give the Toxic Online Rag clicks and page views, they give them exactly what they want.

I’m sure everybody knows that if you see trolls you do not feed the trolls. The Mail are trolls. Don’t just not feed them, starve them. Lock them up in a virtual dungeon and throw a bucket of piss over them. They won’t go away, but allowing yourself to get annoyed by stuff like this is just pointless. Your life will be better without reading, engaging or paying attention to them in any way.

Tonight it’s Argentina v Holland, which should be a more closely fought encounter. There are fitness doubts over the Skunk, which would be something of a blow to the Dutch (no idea of the rumours of Tim Krul playing up front are true), while Messi and Co should certainly cause that defence some problems. One to look forward to.

And speaking of looking forward to stuff, the buzz that surrounds Alexis Sanchez and Arsenal is reaching something of a crescendo at this point. While I’m always somewhat cautious about transfers, aware that things can change very quickly at the last minute until it’s 100% done, at this point I’d be surprised if it didn’t happen.

There’s some wheat to separate from a lot of chaff, for example, the image of him ‘at the Emirates’ was a fake as you can see below: 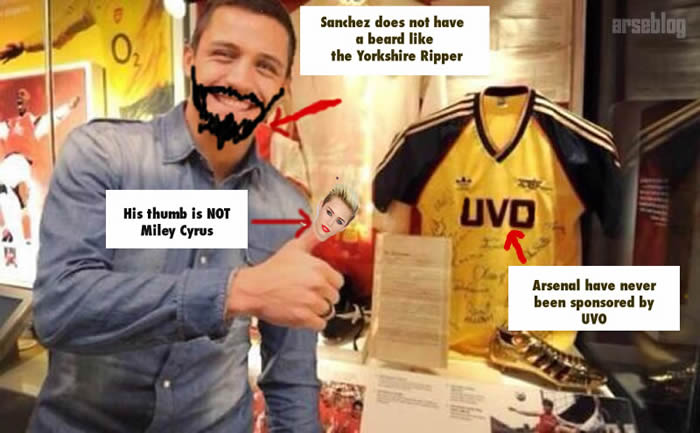 But, all the reports from Spain and beyond say that a deal is close to being done at around €32m and for that we’re going to get ourselves one hell of a player. He’s been somebody we spoke about a lot on the site over the last few weeks and I’ll happily admit I didn’t expect us to make this happen, but I’m delighted that we appear to have pushed the boat out and gone for a player who is going to add many of the qualities we’ve needed in our front three.

I guess a proper examination of him should wait until everything’s done and dusted, but with Sanchez and Debuchy pretty much nailed on, it represents an excellent start to our summer transfer business. There’s still work to be done, obviously, and if Debuchy is steady-as-she-goes capture, Sanchez is a genuinely exciting one.

Sport.es have an article which says ‘ Wenger seduced Alexis Sanchez in a private meeting in Brazil’ (English rendering here), and to think there were some of you who laughed at his little blue swimming trunks. Pfff, shows what you know. However, it does seem that after meeting Wenger, and being bedazzled by the manager’s knowledge of his career as well his plans for him at Arsenal, the player made his mind up to join us despite the interest from other clubs.

All we’re waiting on now is official confirmation. There are suggestions it could happen today, but it’s imminent.

Finally, if you haven’t had a chance to listen to this week’s Arsecast Extra, here it is. In this week’s show we touch on Debuchy (a bit more than Sanchez but there’s some Sanchez stuff in there too), the World Cup, our search for a back-up goalkeeper, middle-names and a lot of flange. Listen here.