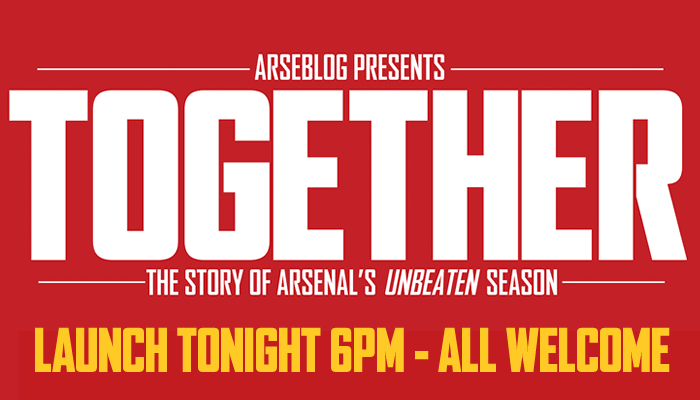 Right then, where to start on this particularly hectic morning?

Well, we have the first snippets of team news ahead of Saturday’s final and although we have no new injuries from the Norwich game, it appears to be touch and go for Thomas Vermaelen and Alex Oxlade-Chamberlain who are suffering from knee and groin complaints respectively.

The skipper has 5 stitches in his knee after what I presume was a training ground collision with somebody (short money on Flamini, right?). The manager said it happened at the last second before Norwich, so presumably that’s what took place. All the same he was one of the players who met the press yesterday, and even though there’s a big enough story in the FA Cup itself, what he might do this summer was brought up.

As you would expect, he dismissed any speculation about where he might play next season, saying:

My future is not important at the moment. My focus is on the final.

When asked about the need for a trophy at the club, and the desire to put the ghosts of 2011 to bed, he replied:

We know there has been a lot of talk about us not winning trophies. It’s very important to win this. [Birmingham] was in the past, but we’ll try to make sure that doesn’t happen again. It was a very disappointing result, everybody knows that. We can’t think about that, Saturday is a different game.

The manager said there’d be no danger of any complacency because we’re nominally favourites on Saturday. You don’t even need to be the most experienced Arsenal fan to know that being heavily fancied to win a final means very little when it comes right down to it, and Arsene is sure his players won’t be anything other than laser-focused on what we have to do at Wembley, saying:

To be favourites doesn’t guarantee you anything. I don’t believe we need any warning. We know that a final is a final, that Hull are a Premier League team, they can pass the ball, they can create chances. It’s just down to us to perform well on the day of the game. I honestly don’t feel there is any danger of complacency. We know the difficulty of the task.

We’d have to have very short memories indeed not to be aware of the fact that status and league position really don’t mean much. Wigan were a division below us and we came within 8 minutes going out of the competition at the semi-final stage, so I can’t imagine for one second that there’ll be anything taken for granted against Hull.

Away from the final, some interesting stuff about Jack Wilshere calling up Paul Scholes after being on the end of some criticism from the former Man Utd midfielder earlier in the season. I have to say I thought Scholes was a bit harsh on Jack, whose season hasn’t been as stellar as Ramsey, for example, but has shown definite signs of progress.

I’ve said many times I see this season for Wilshere like last season for Ramsey and for the most part he’s done well. He’s scored more, assisted more, but really could have done without the injury playing for England which disrupted a campaign I think he’d have been keen to get through without a major knock.

All the same, he DMd Gary Neville on Twitter to get Scholes number, rang him up and had a chat with him about what he said:

If it had come from a rubbish player I could say: ‘What are you talking about?’ But it came from Paul Scholes! For me he was the best English midfielder of all time. I just wanted to know what he thought. He explained it a bit better and told me what he thought I should work on. He was right in a certain way.

I like that qualification, ‘in a certain way’, it shows he’s willing to listen without being utterly compliant and he comes across as intelligent and thoughtful in the rest of the piece. He knows that he’s improved this season but a willingness to listen to Scholes further shows a maturity many footballers don’t possess. He’s not blind to his own faults and wants to become the best player he can, which can only be a good thing from an Arsenal point of view.

Anyway, the build-up to the final will continue throughout the day and for the rest of the week, and we’ve even got a special pre-FA Cup final Arsecast for you tomorrow featuring Dara O’Briain, Amy Lawrence, Gunnerblog, Goonerholic, Philippe Auclair … oh, and a man who has won the cup three times in red and white, Martin Keown.

So keep your ears peeled for that one.

Now, if you fancy kicking off the weekend a bit early, why not come down to The Tollington tonight for the launch of our new book?

Today , May 15th, is ten years to the very day we beat Leicester 2-1 on in the final day of the 2003-04 season, ensuring our place in history as the only team in the modern era to go through a league season unbeaten. To celebrate that Andrew Allen and I have put together a rather beautiful (if I do say so myself) limited edition, full colour hardback book, which takes you right through from summer 2003 until the end of that brilliant season.

There are some ups and downs along the way, and we look at everything that happened in that campaign, not just the Premier League. We’ve got all the stories, match reports, snippets, contributions from Cesc Fabregas, Danny Karbassiyoon, Graham Stack, Amy, Philippe and others. As well as exclusive behind the scenes pictures, illustrations, three of the greatest Jens Lehmann stories you will ever hear, and loads more.

The book costs £20 and comes with a free pack of illustrated postcards (like this one, for example). It kicks off tonight at 6pm and everyone is more than welcome. We’ll be there all evening so don’t worry if you’re a bit late, if you do make it, please come and say hello, have a couple of beers and a chat.

If you can’t make it to the launch, don’t worry, there’ll be books in The Tollington over the course of the weekend, and for those of you further afield, it’ll be on sale via the website from next week and yes, we’ll ship it anywhere in the world (the digital edition will be available next week too via iTunes, Kindle etc).

So, look – lots to do and get organised before then. Hopefully catch up with some of you at the launch later on, or over the cup final weekend.